Greetings! I have a 2018, 13" MacBook Pro which I love for the most part. I’m having one aggravating, but sporadic issue. I regularly use it with a Dell 2715q 4K monitor. Every now and then (couple times a week) I’ll tap the keyboard to wake the MBP. The backlighting on the Dell monitor will light up so it’s “waking” in the background, but will never display anything. If I disconnect the MBP it will work on the laptop screen, but I have to completely restart to get it to work on the Dell again.

Anyone else experiencing a similar issues external displays?

There was a discussion on something similar on this week’s MacGeekGab podcast. The issue relates to the handshake between the laptop and the monitor on wake where the monitor tells the laptops of its capabilities. Older monitors with 8 bit data seem to suffer from this while newer 10 bit data monitors can handle this handshake better. The MGG guys delve into th8s in much greater detail and clarity.

It. Appears that power cycling the monitor can also fix this problem when the handshake fails. Perhaps give that a try.

I did not look up your particular monitor to see what it’s data xfer capacity is so I cannot say for sure if this is your issue.

Thanks for the input! According to some quick Google Fu, the Dell 2715q does support 10 bit. I’ve also tried power cycling and that doesn’t work. I wish it did; that’s more tolerable than a restart.

Are you using a Thunderbolt 3 Dock by chance? I had this exact same issue with a monitor when I was using a dock. I ended up upgrading to a monitor with a built-in dock and that “fixed” the issue.

I had this issue (among others) when I was using a TB3 dongle to connect the monitor using a HDMI cable. I recently purchased a DisplayPort to USB-C cable and haven’t had any issues since.

Interesting. I’m using a dongle as it has power pass through. I wonder if that’s it.

Richard, my wife has the SAME computer and the SAME monitor as you have. She was having similar problems until she switched to a direct connection (no dongles) using a USB-c to DisplayPort cable that was recommended in another thread by @ChrisUpchurch 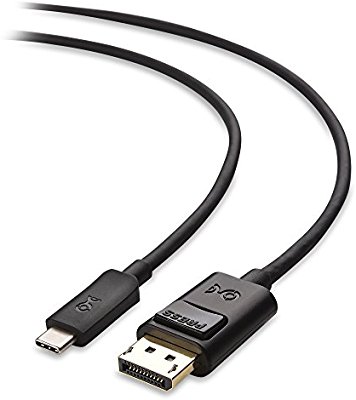 The cable is inexpensive, so its worth a go.

I have the same one and it fixed my monitor issues. I think the Wirecutter also recommends it.