2Do Users of the MPU-niverse unite!

Do you have both the iPad and the iPhone with you?

Positioning is far less accurate on a device without GPS. Maybe on the iPad you „enter“ the location sooner, since it uses a larger scale of positioning? And so maybe 2Do thinks only your iPad made it to that location?

someone didn’t have location on for all times doh

I have also picked 2Do as my task manager however I like to plan my week and have my big 3 tasks (labelled MIT) along with my important tasks (HIT) available daily so I have been putting them in a daily checklist in Excel but have been looking for an application that would allow me to Time Block (aka Pomodoro) periods of time for my Deep Work along with showing my appointments.

In my research I have found a time blocking an application that allows you to both pin items on a fixed schedule, interface with your Calendar and easily reschedule tasks in next time slots.

I just started a 14-Day trail but it looks promising

@Robert, I really appreciate this topic as it made me look at the 2do app again. Personally, I have never found these time management apps easy to use. The problem is me not finding a definite need for planning within an app. That said, I figured since I already had the app on my computer and iOS I would just give it another go. Now I am loving 2do. I have made lots of lists and organize daily tidbits of info right into the app. I have gotten excited lately about workflows and automation due to conversations in MPU podcasts. I am using compatible extensions more often.

I do want to dig a little deeper so that is just a matter of practice. I really enjoyed reading about how other people are using the app. It has been helpful.

The idea of creating a list called Template and setting up a skeleton is intriguing.

I use 2Do across iPhone, iPad, and Mac. I really like it and you can take it as far as you want. Haven’t had any sync problems in a very long while. I’ve tried to optimize it for GTD.

As part of that I assign a few tags, which is easy to do but I feel there are too many taps needed to insert a task and get it configured exactly the way I like. Yes I do use the lightning bolt add task feature which helps. I have suggested to the developer that I would like the ability to define templates of preset task attributes that I could define and reuse so that it would be easier to get the custom defaults I prefer in a specific situation when entering a new task. Hadn’t thought about automation within the app.

Have tried many other apps before settling on 2Do and I really like it. OF was too expensive, others too simple for what I wanted, and a few too cluttered/complex (Pocket Informant) that I think was due to trying to run on android as well as iOS. Sooner or later you are wasting too much time fiddling and switching unless something revolutionary is introduced to switch or they go to the subscription model or something that sours you.

I had some sync issues before, but they are gone. I think I had also been confused because if you use the share sheet you have to open the app afterwards before the shared item actually gets imported (if I‘m not wrong that’s the case with any app). So I was missing stuff on my Mac that was still on hold on my phone.

The good thing with the fiddling is, you can always just add a simple entry to your Inbox and later care about how many tags etc you want to assign. But I would admit that there are a few clicks to many to be made, due to the complexity of the software.

I picked up 2Do via a recent Mac bundle offer, and I discovered that I’d picked up the iOS app a while back (years ago, apparently) and was grandfathered into the ‘Pro’ plan with sync. So I’m slowly trying out the app, which I find comprehensive but perhaps overkill for me and a little overcomplicated. (Swiping to reveal and hide sections in the iOS app is especially convoluted to me.)

How many levels of subtasks can you put in 2Do? While trying to learn 2Do I think I quickly hit the limit.

I created a new list called Personal, and inside it I put a BooksToRead checklist containing 15 items. So far, so good. 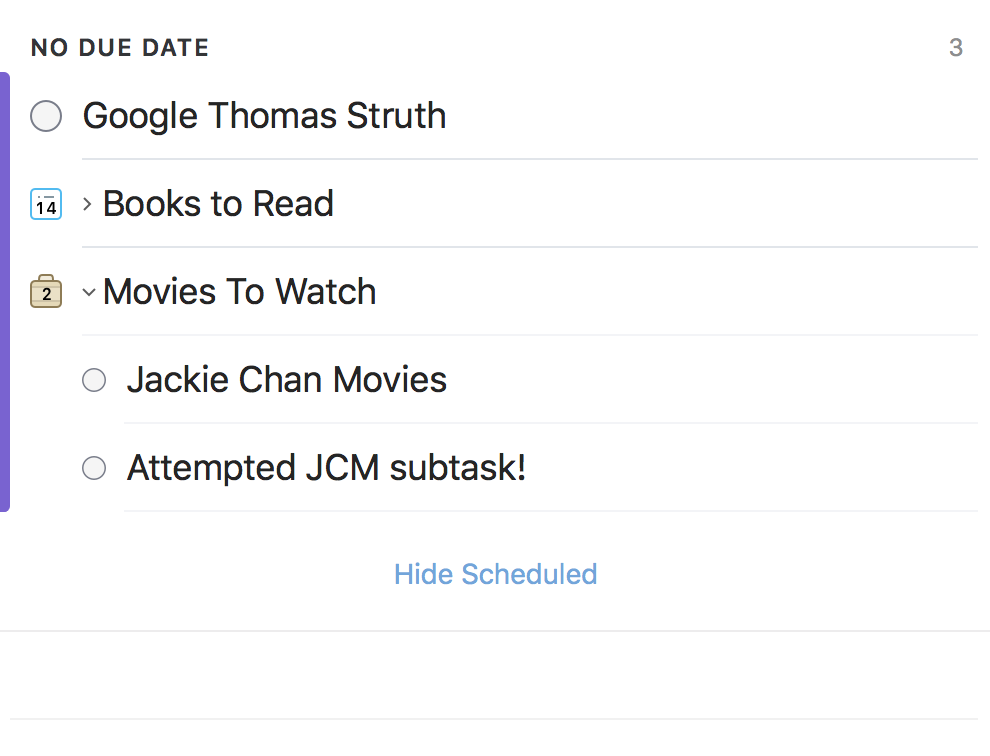 Maybe I’m just too used to using an outliner, with tons of subtasks and sub-subtasks.

Yea that’s a real limitation and one that constantly bugs me.

Main difference between projects and checklists is the ability to set the sub-items’ details. Projects can have different deadlines, etc… on its sub-items. Which checklists are more for just a list of items related to a single task all due together.

My workaround for this is to create a new list group. In your example, my list group would be “Personal” with a list called “Movies to watch.” Then, I’d add a check list called “Jackie Chan.” It’s only one extra layer, but I’ve found it useful when I need several layers.

My workaround for this is to create a new list group.

Ah, okay. Thanks. I already have lots of similar, separate lists in Google Keep, so that workaround isn’t unfamiliar to me, but duplicating the same procedure is a bit disappointing. I was hoping for something with greater nesting capability. After decades of creating and editing with outliners it’s difficult for me to fight that ingrained structure and organization I’ve learned and become so comfortable with.

My setup is to use 2Do, but synced via Toodledo. This means that I can view my tasks on the Toodledo website when I am on a work computer - and I can mail tasks to Toodledo, which then sends them to 2Do. It works well. Toodledo saved searches are very similar to the 2Do implementation.

Hm, you‘re right, I never realized that: You cannot create a checklist within a project. That’s something that should be possible. Maybe I’ll send a request to the developer. 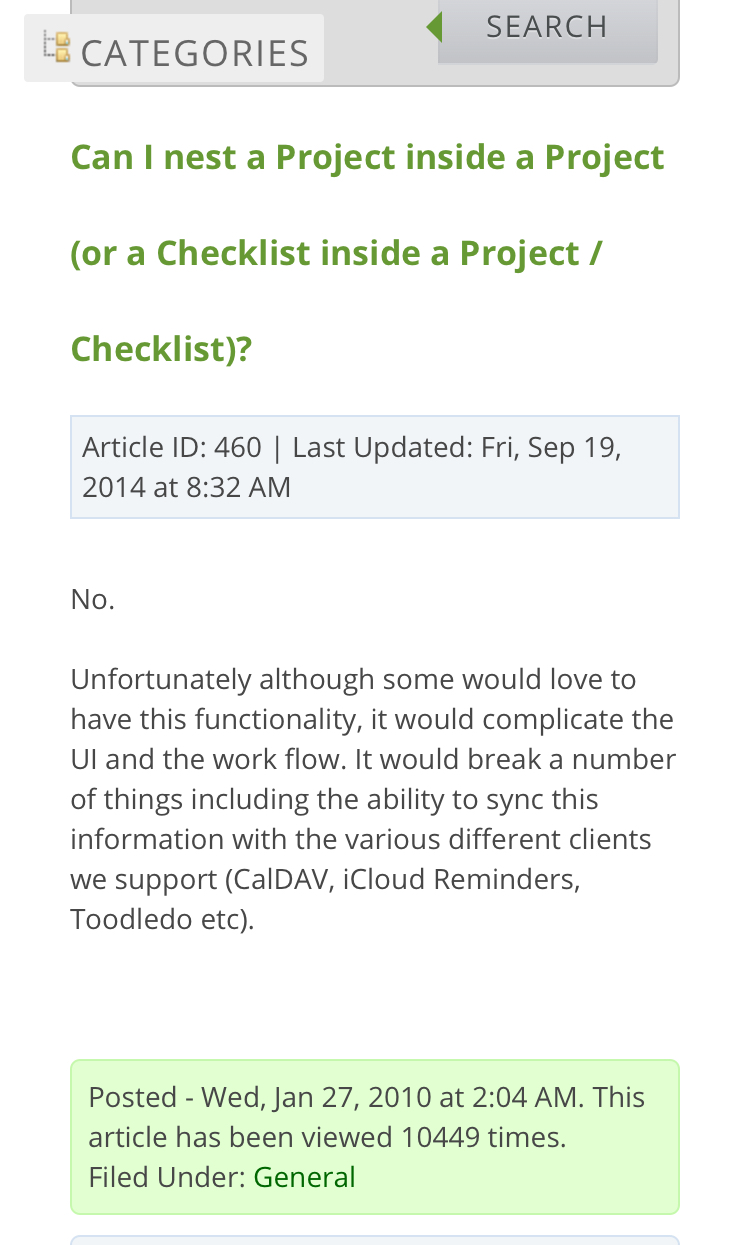 The way I’ve settled in to brainstorm and plan is deeply entrenched in a outline/mindmap listmaking methodology where I can throw down lists of ideas or items then rearrange and edit them as necessary, preferably in an unlimited hierarchy with collapsible nodes/subtasks.

2Do works extremely fast, and I like it on the Mac (the iOS app seems comparatively crowded and confusing), but I’m not sure it can organize and focus subtasks in a way I find most coherent. I’m still playing with the app(s) but I’m not sure it’ll stick.

I’ve typically made do with actual outlines (OmniOutliner, Cloud Outliner Pro, TaskPaper) and simple lists (Google Keep), and I’ll then use Trello boards for maintaining step-by-step tasks with checklists inside cards. But the search is still on for something that could replace them all…

My setup is to use 2Do, but synced via Toodledo.

Toodledo seems pretty interesting, and I see it has unlimited hierarchy of items. What is limiting about that app that has you seeking to supplement it with 2Do?

What is limiting about that app that has you seeking to supplement it with 2Do?

The Toodledo web interface is great, but the iOS app is really basic. I much prefer 2Do, so the combination of 2Do on my phone plus Toodledo on the web works well. Toodledo has a new owner and there is some discussion on their forum about a new iOS app, which would be tempting.

Finally there’s a complication for the 2Do watch app!