Gone are the days of using tapes, CDs and iPods in cars. Apple has taken center stage in most new cars sold as the iPhone replaced all of those older media sources in the car. This week, David and Stephen pack up and go on a tour of CarPlay.

This episode was worth the listen solely for the rant about Microsoft Sync.

My 2013 Subaru Legacy’s CD-nav-radio (climate control is in a different place) thing has already broken twice requiring replacement at the dealer. They told me if I need a third replacement, it’s on me. I want CarPlay but don’t want to buy a new car to get it.

Before it breaks again, I’d like to replace this thing with a CarPlay head unit. I’ll forgo the car’s nav system for CarPlay’s, but would like to keep the back-up camera working (OEM or third-party replacement camera). Crutchfield says no, but this guy on YouTube did this in a 2013 Outback. Seems like a lot of trouble shooting that I don’t think I’d be able to do.

Is this worth the effort for CarPlay? Or just wait till this thing breaks down.

We’re still driving a 2003 Subaru Forester that doesn’t support CarPlay, Bluetooth, or even an 8 mm jack. I’ve thought about upgrading the sound system but it seems like a big investment for a 20-year-old vehicle. On the other hand, I first had those thoughts 5-10 years ago, and the car is still running fine. If I had upgraded then, we would have gotten those years of enjoyment out of it .

I use a Bluetooth-to-FM device to listen to my podcasts when driving. It’s not great here in San Diego, where the FM spectrum is jammed full of stations. But it works ok most of the time.

I’m thinking about getting an bluetooth-to-cassette adapter, but apparently those things need to be charged, and that seems like it might be more trouble than it’s worth.

Yes, the car has a cassette player, as well as a CD-player. I’m thinking about installing 8-Track for sheer novelty value.

Get yourself a Bluetooth speaker like the WonderBoom to give you some volume and play audio directly from your iPhone.

I want CarPlay but don’t want to buy a new car to get it.

Carplay would be nice but I’ve been plugging into a car aux-in socket since I purchased my first iPod. If you decide to replace your OEM hardware with a CarPlay unit I recommend you have it professionally installed.

I added CarPlay to my 2012 VW Polo. Best investment ever until the car was written off last year by a drunk driver.

Next best investment is my Tesla 3 which arrives next week! (Ironically, no CarPlay!

I added a new head unit and speakers to a 79 Pontiac in 1981. Never gonna do that again

I have vehicles about that age and it was about $300 to buy a single height, non-Carplay head unit and have it installed. A double height CarPlay unit would be about $500. I’m in the Midwest and these were put in just before COVID, so prices may be different for you, but I thought it was well worthwhile for clear audio. But I know the feeling of thinking the moment you make a non-mandatory investment in an old car, something will happen to the car.

I have a wireless adapter that turns the wired CarPlay support in my 2018 Hyundai Ioniq Electric wireless. I only take my phone out of my pocket if I need to charge it, and then I put it on a magsafe dashmount

If I had to take it out of my pocket and connect it with a cable every time I used the car, I would go mad.

Now, if only I could wirelessly charge the car as well…

Hi there, I wanted to drop a note about the Car Keys segment from this episode.

Car Keys is terrific – better than I thought it’d be. I didn’t realize my model was compatible with Car Keys until researching a model to trade up to buy it – and can say it’s terrific!

Both my wife & I use Digital Car Keys from time to time. I try to avoid taking my car into downtown Chicago, as there’s been a lot of carjackings & thefts in the areas we used to go in the city – but when I do drive downtown, I do NOT bring my car key/key FOB with me. I just use my iPhone & Apple Watch to access/start/drive the car. This way if something does happen to me, bad guys won’t be able to start/drive my car without my iPhone or Watch, which would be locked & without Face ID/passcodes, they won’t get far (or anywhere) with my car.

I’ve got a driving age teenager, and as mentioned in this episode – I’ve shared the Digital Car Key with him and his iPhone + Watch, and I do have the limitations set on the shared car key so he can’t go faster than 65mph, there are limits with CarPlay access and such.

It’s really a terrific system. Having the freedom to not have to take a physical key FOB with me at all times (unless I want to, having proximity sensors to lock and unlock the car as I approach/walk away is nice) and just use my iPhone/Watch which is always on me anyway is terrific. And if my iPhone is somehow stolen, but still have my Watch – I can at least unlock the car and get in it if needed.

In the episode David asked for anyone with information about how to disable Siri speaking every little turn to you while using maps to post it here. So far I have not seen an answer. I also find this irritating and would love to know if there is a way to disable it. Any suggestions?

I would love to know how to get carplay to NOT automatically give me directions home (or elsewhere) when I plug my iPhone in.

I think David said he had it turned on, but Stephen has his turned off.

I’ve googled but I can’t figure out how to switch it off.

I’m not sure about from the CarPlay interface, but from Maps it’s this control on the upper right of the map view while following directions. I use the middle option, which only speaks aloud things like road hazards and requests to reroute to save time. 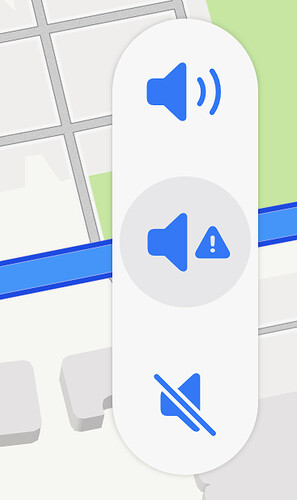 OTOH, I just invested $20 in a Bluetooth cassette adapter. Which will go right back to Amazon if it turns out the cassette player doesn’t work in the car. I haven’t played a cassette–or CD–in that car since I think the George W. Bush administration.

Mine were all switched on, and after turning them all off I did not receive any further map suggestions/predictions.

I replaced the head unit in my car for an airplay unit and the reverse camera works through that unit without any issues.

“Siri, tell my wife that I love her and that I think about her all the time”

Okay, here’s the message for Emily:

I love you but I think about her all the time.

Should I send this?

Okay, I’m not sending this for now.

(Edit: the “and” became a “but” because it was French Siri and they sound similar)

This is similar to what I was going to post about.
@MacSparky often mentions about Siri’s struggles with names.

By marking my partner as my wife in the contacts app, I can with 100% reliability ask Siri to “tell my wife…”