Alternative to 1Blocker for Mac

This is becoming routine and it’s annoying: I go to a news aggregation site like Techmeme or Reddit, open a half-dozen or a dozen links in background … and it slows my computer to a near standstill.

I’m running 1Blocker on Safari. Is there an alternative that’s better?

One solution I’m trying: I’ve now set Reader view to be default on Safari. We’ll see if that helps.

Oddly, this is not a problem on iOS. I can only assume that Safari/OS integration is better there.

That said, I surf with lightning speed on Chrome and Brave (which uses Google’s Chromium-browser underpinnings but all the data-sniffing ripped out), which can use thousands of the same ad-block plugins, like uBlock Origin. (I use two free sister-offshoots of that free blocker: Nano Adblocker and Nano Defender.

I’d like to use Safari as my main browser but the plugin situation there is so dire I just can’t.

I use Ghostery to block ads and other tracking stuff in safary. it blocks analytics, advertising, beacons, and widgets.

Better Blocker is a privacy shield. Will it also improve performance?

It’s an ad blocker that also blocks trackers, Mitch. I own it as well as 1Blocker, and I don’t see much difference between the two products’ blocking abilities

That said, I still prefer Brave/Chrome with free ad blockers and blocklists, along with additional plugins like Privacy Possum 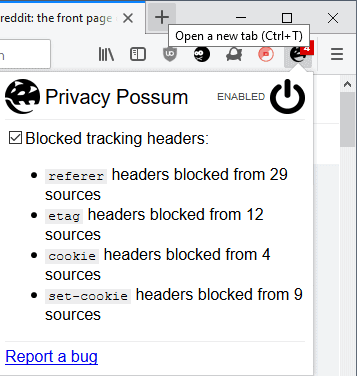 Privacy Possum is a new open source browser extension for the Mozilla Firefox and Google Chrome web browser by a former developer of the EFF's Privacy Badger extension.

+1 for Better Blocker. Ethical and works equally effectively on OSX and iOS.

I use Ghostery but have to turn it off frequently – videos on most old-school news sites will not play while Ghostery is active.

How do you share bookmarks and open tabs on your iPhone and iPad? Or is that not an issue?

Also, I’m curious what other extensions you use on Brave/Chrome?

Thanks I installed and activated Better Blocker.

When I need to access bookmarks/tabs I’ll use Safari or Chrome (which sync between Mac and iOS). Brave doesn’t sync yet, I don’t think, but it’s coming.

On Chrome I use the following privacy plugins (all or most work in Brave as well):

I suggest using Firefox with the settings and extensions mentioned here: https://restoreprivacy.com/firefox-privacy/
Safari is fine but Chrome is a privacy nightmare (even with extensions). Browsers like Brave are nice, but they have a long way ahead of them.

It does not really matter what you use on iOS since all browsers must use Safari engine. But Firefox can also share tabs and bookmarks.

With Microsoft’s December announcement that it’s aiming to abandon its browser engine for Chromium (which Brave also uses), Firefox is increasingly the odd man out, unfortunately, and this will affect its dev/extension support.

On Mac it’s a simple matter to import bookmarks from Safari/Chrome into Brave, while also having access to the gigantic field of extensions for Chrome. The benefits of Chrome, without the Google tracking…

Let’s hope for all our sake that Mozilla will survive

I think that more and more people are concerned about their privacy and there is a solid market for Mozilla and Firefox. Firefox is also great since it is so customizable and a lot of people like such products. Firefox will never be the market leader, but it will survive and do just fine (hopefully).

I know about Brave and once their product gets a little more evolved, I will definetly give it another try.

Are you referring to the Mojave extension restrictions?

Safari had one or two EXIF viewer extensions, but they no longer work on the latest versions of Safari and development on them stopped.

You know those annoying pop-up overlays on sites, especially the ones on news sites when you read your 5 free allowable articles and now you’re on #6? Well, I have a Chrome/Brace extension that wipes away all overlays with a click - nothing like it in Safari (although I use a javascript bookmarklet that comes somewhat close).

How about adding a customizable Dark Mode to sites on a per-site basis? I do that on Chrome/Brave. Safari has never had anything like it.

I have an extension (that I usually have turned off) that can save a webpage as an ePub document, which is occasionally extremely useful.

I use an extension to ‘fix’ Twitter so that it (a) replaces Twitter’s t.co links with unshorted, original ones, and (b) always includes info on who tweets are replying to in replies (something Twitter had but removed).

I use an extension to right-click to get the names/sizes of fonts used on sites.

I use an extension to automatically send me to the Wayback Machine version (if there is one) of a webpage that no longer exists.

… and there’s even more. Safari does not come close, unfortunately.

Firefox will never be the market leader, but it will survive and do just fine (hopefully).

Maybe. Hopefully it won’t become an also-ran like Opera, or Omniweb, or iCab, or Sleipner. Firefox needs to compete on speed and security/privacy and on extensibility. When Apple’s Webkit owns iOS and when Chromium-based browsers (Chrome, Brave, Microsoft’s upcoming browser) own the majority of browsers, I worry that devs will look either make Firefox a 2nd-class citizen, or they will abandon it given their own limited resources.

Brave is cool. Thanks for mentioning it.
I thought I had a problem with my data analysis, turns out it’s a bug in Safari and Firefox, but Chrome displays it fine. I wasn’t looking forward to installing the Trojan Horse that is Chrome. Brave displays my data fine, and doesn’t steal my soul in the process.
Thanks again!

It’s a good browser - the guts of Chrome, but with the user-tracking gone. The built-in ad/tracker-blocking is good, plus you can use any Chome 3rd party add-ons too. They’re also building up a micropayments option for donating to sites you like. It’s not a fly-by-night browser (which isn’t to say that any 3rd-party browser isn’t going to always struggle), and the company’s CEO was originally Firefox’s CEO.

Check out the blog from time to time - I just did and read that if you visit the Cheddar.com streaming video site they’re offering 3 free premium months if you visit via Brave.