My sister has an iPhone SE on Verizon. She will be traveling through a few countries in Europe next month (France, Germany, Netherlands). We’ve looked into the Verizon travel pass ($10 daily) but we wonder about the wisdom of getting a European SIM. Does anyone know if that is even doable and/or smart? Since she’s traveling between countries would she need to get a separate SIM for each country? Not sure what the best route is, any wisdom is much appreciated!

Make sure the card you are buying has roaming enabled. Then you should be able to use it during the whole trip at no extra cost ( roaming is free in EU countries since last year).
On the other hand, it is a pain to change phone number and free WiFi is pretty easy to find in those countries, so if you don’t need to do some bandwidth hungry work, you should be fine with your normal SIM.

For that long a trip I’d recommend she get a sim - then she has data everywhere. While Wi-fi is usually present, in my experience it is always absent when I really need it. The prepaid data sim wiki is a good starting point to figure out which sim she should buy when she gets here.

While Wi-fi is usually present, in my experience it is always absent when I really need it.

The prepaid data sim wiki is a good starting point

Thanks for the tip, I was not aware of this page

Buying a SIM makes sense, it should cost around 20-30€ for your trip, depending on how much data you need. As mentioned before, ask for international roaming to be enabled when you buy it and it will work anywhere in Europe.

Hotels often charge a lot for WiFi in your room and public Wifi is often unreliable.

The verizon day pass makes sense for a couple of days but starts getting expensive after that. I have purchased sims in many countries in Europe and Asia and have had no problems. I don’t think I have ever paid more that about $30 for the sim and a reasonable data plan — and many time less than that (I won once on a deal in Lisbon with PT — 5 euro for 10Gig good for a week)…

The one thing that I try to do is always have the seller install the sim and get the account set up. I have had one or two experiences where i installed the sim myself and couldn’t get it working because something needed to be set up — and i ended up having to go back to the store.

Just returned from the UK. I bought a SIM on Amazon before I left for US$30 from three.co.uk. Worked great and found that if I had waited I could have gotten one for even less at the Three store in Scotland but it was nice having service immediately after landing in Edinburgh. I got one there for my wife’s I phone SE. They say it is good throughout Europe but I only used it in the UK. You get a UK phone number but cannot use to call the States. That was a non-issue as I used data to make calls using Skype and MagicJack or made calls with Facetime or Messenger. I am headed to Belgium soon and this time I got a card from Orange. I also bought it on Amazon.

Here is the Three.co SIM. 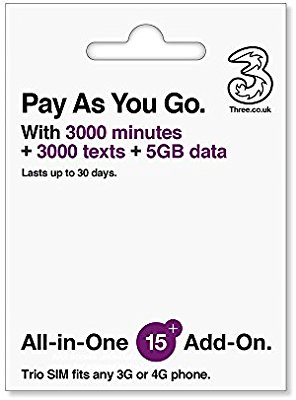 This all is very helpful. Thank you for the input, suggestions, and tips. You all are great!

I am going to be in London next month for a week and I’m going to use the day pass because I need my clients to be able to easily get hold of me. That said, if I was staying much longer, I would seriously be looking at these other options.

Id recommend looking into 3 (a UK provider) great If you going for a week, I’d recommend their £15 Pay as you Go Sim (https://www.three.co.uk/Store/SIM/Pay_As_You_Go) 5GB of data that actually lasts 30 days.

I too would recommend Three.co.uk. This post turned out to be long and should probably be skipped by anyone who isn’t thinking of obtaining a Three SIM for use in Europe.

However, there are some caveats, where I would suggest the OP dive a bit deeper. Specifically Verizon and Sprint used to be less compatible with GSM networks. I believe that has evolved with their support for LTE but I am uncertain of the current status and whether it varies if the iPhone SE was purchased from Apple or from Verizon. One resource to check would be the radio frequencies the specific model of phone supports and how that aligns with the frequencies which Three uses. The OP might want to take a look at Apples model specific radio frequencies page here:
There are also sites like Will my phone work.
Wikipedi https://en.wikipedia.org/wiki/Three_UK has Three using these frequencies.

While the OP did not mention UK or Ireland as places his sister would be visiting, if she is, I would recommend picking up a Three SIM there. If you went into a Three shop the SIM is free and you could verify it works before putting any money on it. I wasn’t aware that you could purchase Three SIMs from Amazon in the U.S…

In some of the reviews on Amazon it is apparent that the individuals didn’t know how Three’s prepaid system which Three refers to as “Pay as You Go” works. Specifically, you get a SIM and you then add money which is a “Top up” in their nomenclature. You can Top-up by obtaining a voucher with a code at almost all convenience stores, grocery stores, petrol stations, ATMs, etc. You can Top-up with a credit card. However, it appears Three requires this to be a UK registered credit card. You can read about possible Top-up issues while outside the UK here. There may be a way around this credit card limitation with third party vendors of top-ups which accept PayPal.

If you Top up and did nothing else you would be charged on a per use basis for calls, texts, and data. The prices I mentioned above and which were in ronfel’s and adamsbrown’s posts are actually a package deal which Three calls an “Add-on”. When you add money to the SIM, if you want to use an Add-on you should do that immediately after the Top-up. You would typically be prompted for this while toping up. Note, when you purchase the add-on, it essentially takes the purchase price of the add-on out of your balance. So you will get a message saying your balance is zero. This concerned one Amazon reviewer but they reported in puzzlement that their phone worked. That’s because after purchasing the add-on you have the add-on services for 30 days.

Besides GDPR the European regulators also forced the European mobile carriers to provide better roaming pricing. You can read about Three’s roaming terms on their “Feel at Home” page.

Take particular note that on page they state: “If you’re a Pay As You Go customer, you’ll need to have activated your SIM and made a chargeable event such as making a call, sending a text or getting online, in the UK first.” So referring back to Amazon, I would confirm that the seller is actually activating the Add-on in the UK before shipping the SIM to you. If not, it would seem like the SIMs roaming feature might not work while in Europe. It probably would still work, in that you would be able to pull down the cash balance on the card but not be getting the full benefit of the add-on particularly for data.

Three on the same Feel at Home page mentions that while roaming in Europe the Pay as Go plans are capped at 12GB. So there really wouldn’t be any reason to buy anything more than their £20 plan. These caps might be partially my fault. A few years back on a holiday in France, I pulled down over 1TB on a Three Pay as You Go SIM, without any problems.

Also, note that the “Add-on” packages with “Feel at Home” are primarily oriented for UK users being able to make the same free calls they would typically be able to make while in the UK. So while roaming in Europe, you will be able to make calls within the “Free at Home in Europe” countries and the UK. None of Three’s plans would include calls back to the U.S… Although, in most populated areas your data connection should be good enough to access services such as Skype or Vonage to place a call to a U.S. telephone number.

I think I’ve covered everything I can think of. I have had many friends who have been successful with using Three. Although, in their cases they picked the SIM up in the UK or Ireland and I know they were using AT&T or Sprint as their U.S. carrier and had a GSM SIM friendly phone. Thus my suggesting a bit more research for Verizon related phones. Good luck.

We switched to T-Mobile.
Some of my clients who do a lot of internatninal travel also use T-Mobile.

We just returned from 5 weeks in Greece and Italy. A Greek SIM card was going to be much more expensive than we wanted—we elected to use wifi and only turn on the ATT Day Pass ($10) when we really needed it. We were never charged for wifi in hotels and when we rented apartments, the wifi was superb.

FWIW, I have used TMobile on my iPhone 6 on 4-5 European trips with OK results until last month. I was in northern Italy and got 0.06-0.10 Mbps downloads consistently over a week trip (I have the Ookla app). It was painful.

My wife got a Three SIM card on a previously trip in the UK and had very good results.

Are there any esim options available so I don’t have to mess with a hardware install? (iPhone Xs Max)