DEVONthink: stuck at the bottom of the hill

For me, I have DT databases that correspond to my “Areas of Focus” as in those in the GTD methodology. I didn’t plan it that way. It seemed like a natural way. I am 15 months in using this approach and it has worked for me so far. I also have a few databases setup with large items that I don’t want to sync everywhere.

Additionally, I find annotating documents already in DT more cumbersome because 1) DTTG is not as intuitive as something like PDFExpert, 2) I have to save the PDF as new file instead of just saving the annotations on the existing file.

I learned from this forum recently that you DON’T have to save the PDF as a new file. Download PDF Viewer. It works seamlessly on iPad and your edits find their way back to Devonthink immediately.

One decade’s worth of everything bucket.

That might be part of the problem. Start smaller. I had one project I wanted to do and I started putting those files in DT for that one project only. Now, I really like it. You might want to think of one area of your life you could try DT if you want to attempt to get up a little hill before you climb the mountain.

For those interested about selecting the database in DEVONThink when importing…

Make sure in your settings under Import at the bottom, change the destination to “Select Group”, “Global Inbox”, or inbox of current database. If you choose “Select Group” you get a really nice dialog that prompts you. 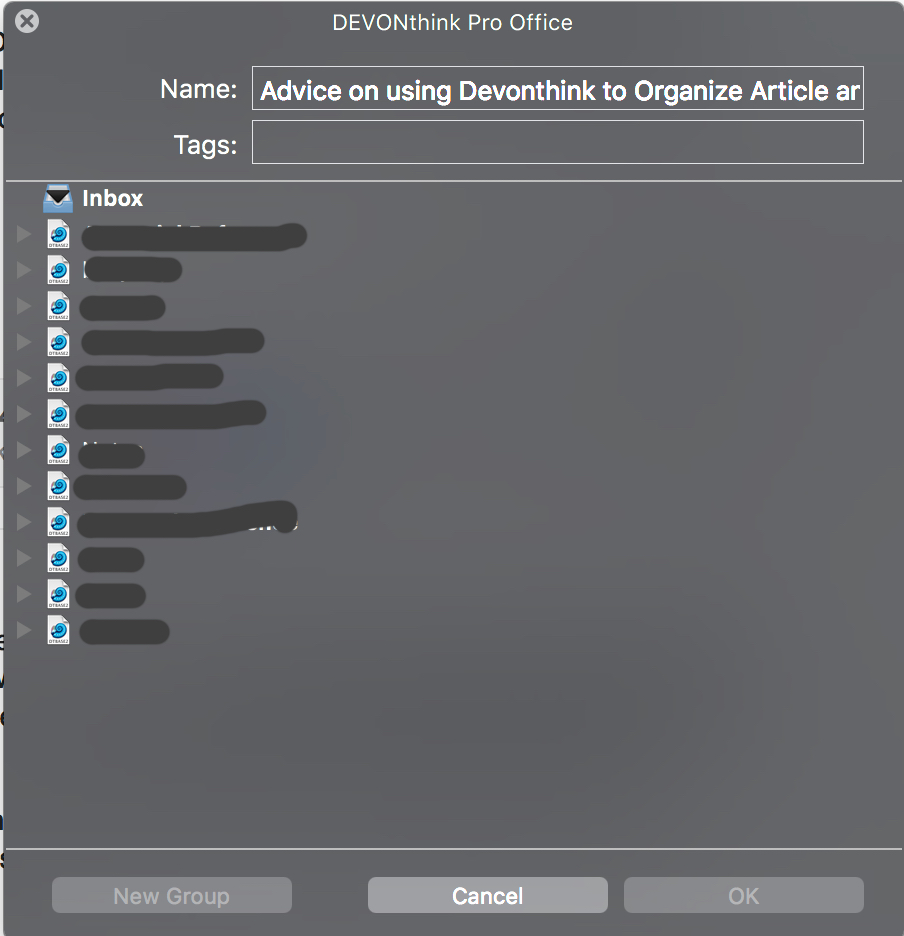 Just decided to give DT Personal another try with a folder of about 800 PDFs of academic articles.

you are then presented with the “ Save PDF to Devonthink Pro ” button.

Thanks for pointing this out! I never noticed this down there in the PDF drop-down! Heading to System Preference to create a shortcut key right-now…

Aside…yet another +1 for Discourse: to test this DT tip I tried it on this very thread (now at 113 posts and counting!). The resulting PDF is so nicely formatted (see below). A print stylesheet in 2018?! What? Imagine what saving off a pdf from facebook would look like. 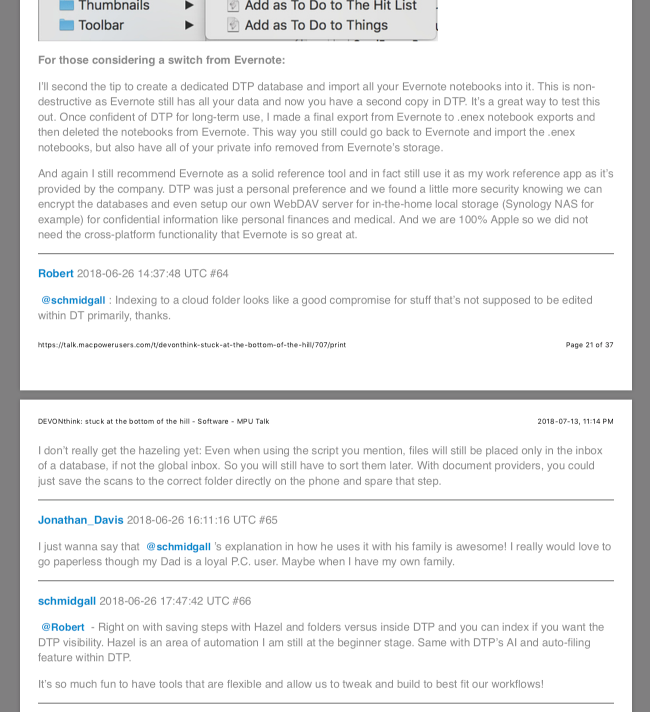 1.) Regarding the rendering, what macOS version are you running?

2.) I hardly ever use the AI to auto-classify research articles.

There are many posts over on the DTPO forum, explaining the process and underlying structures best suited to having the AI work effectively, but given it is essentially running algorithms that are based on content, one would need very diverse ‘areas’ of research, to have it work effectively in all scenarios.
The – justifiable, imo – refrain from some long-time DTPO users is that the AI cannot replace your thinking/insight into the content of the data, it is there as an Assistant.
I agree with this, but as is apparent from my points below, there certainly are scenarios where it works so well, to the point that it does do the thinking for me, in sorting specific types of data.

Turning to something more concrete, I ran into this problem constantly in the beginning, since I had 4 major comparative areas, all in one DB.
So Article A would be talking about what is happening in Country’s 1, 2, 3 and 4…
Added to this, similar terms are being used in all for comparative areas – so that doesn’t prove a point of distinction either.
I then split that DB into 4.
But that still doesn’t necessarily solve the Messi example (collapsed) above – again, depending on one’s own data.

But in spite of this, I still see the AI as being very useful in specific examples – where I am more interested in filing repeatable instances of a type of file, or where I have those top-level broad groups, that I just want to get things into initially – as filed from the top-Inbox – before I get more granular after the fact.
Put differently, I view the Auto-classify feature as something that works very well in specific contexts, but is not something that will work in all contexts, equally well, if at all.

That said, the See Also/Magic Hat function is something I use frequently, even if just to quickly cycle through 2/3 articles about a specific point.
In other words, I know Author D, G and Y wrote about it, and I could search for/navigate to each – but find that when reading that article by D, the See Also prompts me with the articles by G & Y in any event, so I often use it instead of searching/navigating, since its quicker.

I’m not aware (but would love to hear of examples) of any consumer products that have an algorithm that will be able to magically sort text-heavy journal articles, in a manner that the average/bulk of users would find useful.

But I am from the liberal arts/social sciences side of the World – so that’s simply my perspective, given how I know the articles to be written in my context.
And I’m (obviously) not sure what your field is – and maybe, given what it is, and what you fed into DP – the AI should have been able to do the necessary, and didn’t.
But there are many factors at play – so what doesn’t work at first, can very well start working over time, as the DB grows and more structure becomes apparent to the AI.
At least that has been my experience of it.

Thanks. I am a cultural anthropologist so I have the same issues with regional vs. topical organization of literature. My file system for lit. (both digital and analog) is simply alphabetical by author and I rely on keywords/tags in my reference manager (BibDesk) to search and group topically.

Admittedly the folder I dumped in there was a bit of a hodge-podge but at this point I have manually sorted over 90 articles out of the 800 and I’d expect it to at least suggest a group at this point. If I have five hits in “See Also…” that are in the same group, it seems reasonable to expect that it would suggest that group.

This is excellent. Thanks so much.

“Forced…at work” is the right phrase for me, too.

What a great discussion here. Already learned few tricks and tips on DTP. I have recently moved to DTP for personal doc and research purpose. Are there any best practices or tips for DTPtoGo for iPhone/iPad? One question on sync, i created personal database on mac and then sync it to iPhone. Now when i open DTPtoGo app on iphone, your document index is there but no cloud view to see a document so you have to download every single document which is not optimal for quick search n all. How you guys navigate that without downloading all documents in your iphone. Second, once you download a document, how to delete it from iPhone memory only or put it back to cloud only mode?

This can be set at a database level, or the item (i.e. document/group/tag) level. Whatever the setting is at the top-most level is the default, and settings at lower levels can be changed as desired.

So for example, you might have a database set to “On demand”, so that be default everything is only downloaded the moment you access it. However, you may have one group in that database you want to be downloaded to the device, perhaps because you want to ensure it is accessible when you’re offline, or perhaps because you use it frequently, or whatever. You can long-tap the group and change the setting from “On Demand” to “Always”. This means that group, and anything within that group, will always automatically download to the device in full. Meanwhile, other groups or items in that database will continue to follow the database setting.

This is how I manage at least one of my databases. One of my databases has a large variety of work-oriented items in it, a large number of them are fairly small documents I access on a regular basis. A small number are very large files that I really only access periodically and normally only on my Mac. The database is set to download “always” and the group of large, rarely-accessed files is set to “On Demand”. This way I always have access to the files I need on the go, but those large files aren’t downloaded unless I need to access them *(which is rare).

Does this help at all?

@Scottisloud Thank you so much. This is really helpful. Loved the group level setting.
One other question, once you downloaded a document, how to put it back to cloud (on demand) so that you can free up that space in the phone?

The command you want in DTTG is “purge” as explained under section 3 here.

Thanks. I saw the Purge action button on individual file/group level but the “Downloaded” folder does not have any Purge button. I am sure over the time, it is hard to see what is downloaded in what group/database and idea for a separate “Downloaded” folder was to quickly see all offline files available and i hoped there was a quick Purge function there too. Am i missing something or we just need to wait for feature update.

Where is the 'Downloaded" folder? Is it a group you created in DTPO?

In Mobile app, it is one of the smart folder/group. When you click ‘Edit’ on right top corner then there are list of folders which you can select to display all time. Will share screenshot later.

This is definitely a matter of personal preference. I professionally advocate smaller, more focused databases over large consolidated ones.

The number of items who retain their downloaded contents is controlled the DTTG’s Settings > Keep slider.