There’s a lot of talk lately about AI-generated art. If you want to explore it, I’d recommend checking out DiffusionBee, which has a free Mac App. That said, I took a few shots at getting it to draw a picture of a bonsai tree on top of a Macintosh...

I played around a bit with variations of the prompt he was trying.

Order matters. Putting “macintosh computer” at the beginning of the prompt made it more prominent in some of the images than leading with “bonsai tree.”

“macintosh ​computer with a bonsai tree on top” 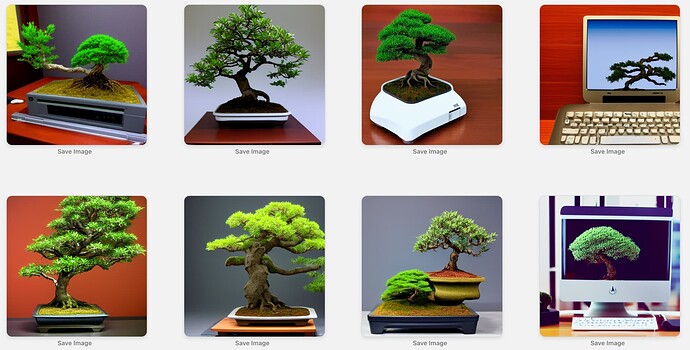 Adding “desktop” to the prompt produced striking results for the computer part of the image, at the cost of less (or no) bonsai trees.

“macintosh desktop computer with a bonsai tree on top” 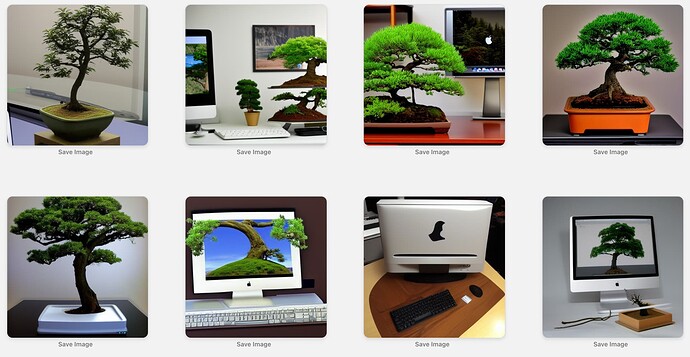 There’s a bunch of web based tools now. Dall-E, was one of the first, but a bunch others are available.

Even Microsoft is adding one to their new “Microsoft Designer” product.

It’s the new “shiny thing” every company thinks they have to have.

Even Facebook, shudder, has a version in their labs that generates video (just a sequence of photos, after all).

No need to install anything, and IMHO, the web-based tools are improving much faster as they keep adding to their data and algorithms.

Also, if you don’t have a M1 Mac, the web based versions are really the only option.

Even Facebook, shudder, has a version in their labs that generates video

It’s the new “shiny thing” every company thinks they have to have.

I think I will start applying the same rules to tech as I do for TV/movies — the bigger the hype, the less attention I will pay to it.

Along similar tech-babble lines, I have warned my younger friends who have never been through a big economic downturn, if your job title is something your Grandma doesn’t and cannot understand, better start polishing up your resume now.