I know that various RSS sync services include options to filter your feeds at the server (ex: exclude podcast entries from blog – they go in my podcast player). However, I would like to move away from a sync service and use a reader which supports local feeds with iCloud syncing. There are many options today, but none of them support filtering as far as I know.

And then today I see this: 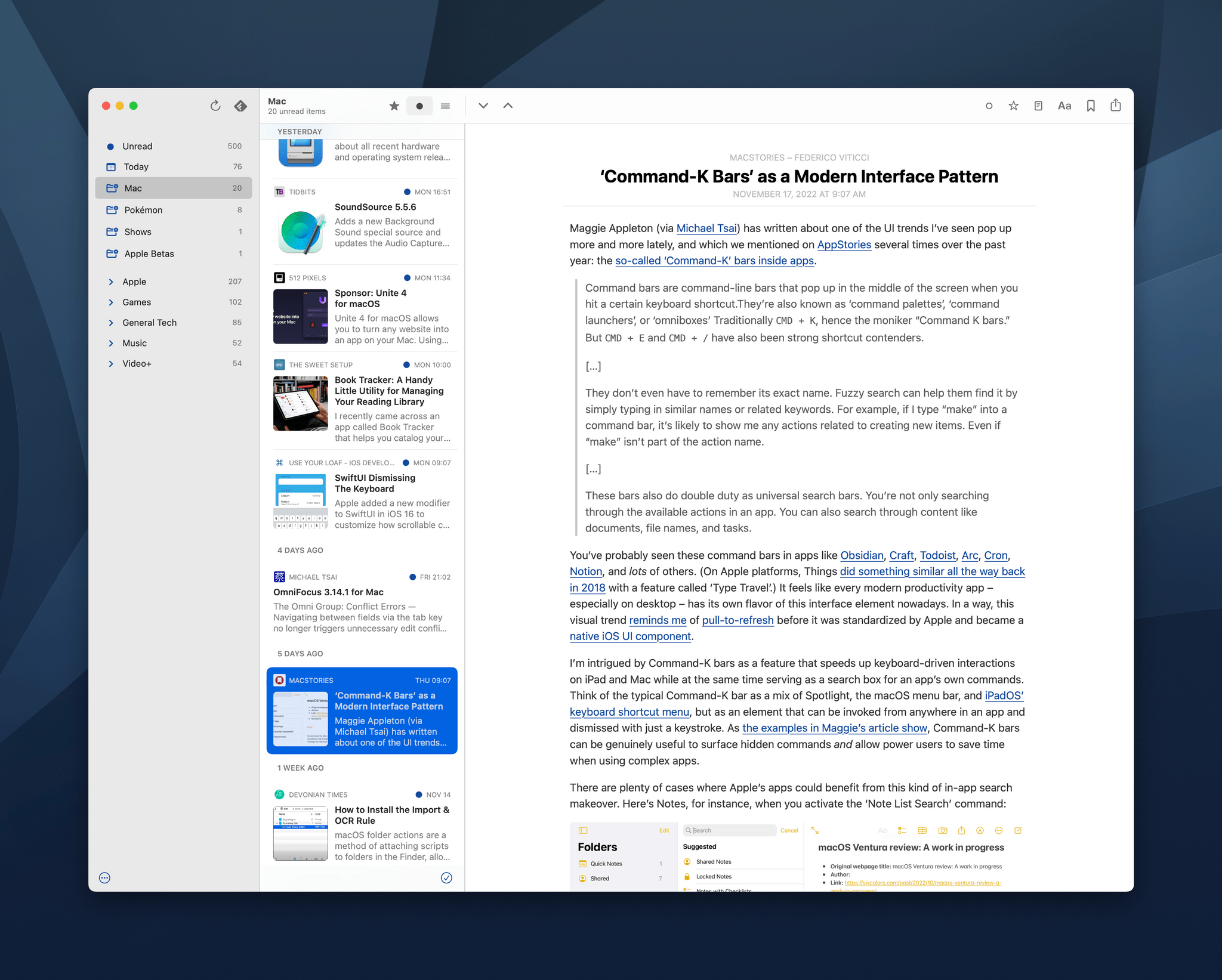 Around this time every year, I tend to start fiddling with my RSS setup. Last year, I drastically simplified my setup, and it worked well. Still, with Twitter’s fate uncertain, I thought it would be an excellent time to reexamine what various sync...

The app is free to download so I did. The one free smart folder is the “Today” folder. Just tap and hold and an “Edit” option appears. You can rename and reconfigure the filters however you want. It looks great, except that smart folders do not sync via iCloud. I would need to recreate the smart folders on each device. Sigh. Almost there, but not quite.

I’m tempted to go forward with the purchase of Premium (unlock forever on iOS/iPadOS/MacOS for $24.99 or iOS/iPadOS for $9.99), but thought I would check first. Are there any other RSS readers which provide support for filtering and syncing of local feeds via iCloud?

I am a regular user of Reeder and occasionally use NetNewsWire. While the current versions of both do support iCloud syncing of local feeds, neither includes any local filtering/smart folders. I’m hoping maybe some of you know of one that does. I would prefer to use the same app on all platforms (iOS, iPadOS, & MacOS) with syncing of all feeds and filters across all devices.

Just to give a negative data point, I just checked News Explorer (which does local RSS syncing with iCloud) and it does not seem to support “Smart feeds”. So one less to check.

By the way… are you sure that ReadKit supports local feeds with iCloud syncing?

The built-in RSS service is an offline reader without syncing abilities, but will support iCloud sync in an upcoming version.

They just released Smart Feeds and It was just announced that iCloud support is coming in the future update.

You know, I missed that detail. I was thinking is was only the smart folders which didn’t sync. Without any iCloud syncing, it’s even less interesting to me. I’ll definitely be taking a wait-and-see approach to their promised coming update. Thanks for clarifying.

Regardless, I am happy to see at least one product which offers local filters. Here’s to hoping more apps add the feature.