Another week, another iOS / iPadOS release.

Is this any more stable than previous iOS13 releases? Can anyone recommend a switch* from iOS12?

*I can’t bring myself to say “upgrade” or “update”.

I’ve had a great experience with iOS 13 on an iPhone X and two iPads. Out of curiosity I recently posted to my extended family’s ongoing Messages thread to ask how things were going with iOS 13… 16 people using a mix of iPhones and iPads, most of them using one of each. Not one complaint which is what I expected as I had previously been checking in with most of them individually over the past month as I’m the family techie that often provides help.

Now, something to note, most of their use is not advanced. They use the devices extensively everyday but most of it is for the usual stuff… email, Facebook, web browsing, messaging and a few games. These are not users running businesses with these devices or doing advanced things. 2 of them are college students using iPad full time in college and are very happy with the experience.

Most of the others have barely even noticed the changes brought by iOS 13. For them their devices are pretty much working like they were with iOS 12.

TidBits got a little (deservedly) snarky, opening its article, “Seventh time’s the charm?” 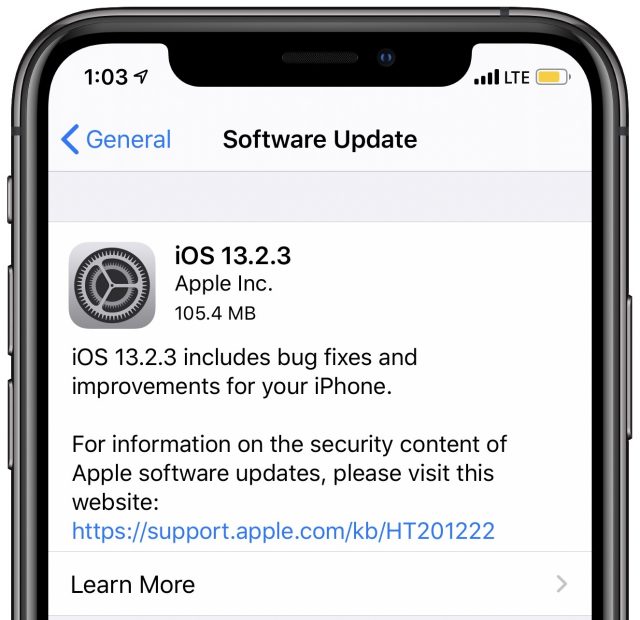 In what has become an almost weekly occurrence, Apple has once again updated iOS and iPadOS. This week’s update to version 13.2.3 aims to fix miscellaneous bugs related to search, message attachments, email, and background downloading of content.

Kind of funny seeing coverage in some of the press. Yes, Apple should have great software out of the gates. But we live in reality, and software is imperfect. Not saying one can’t argue that they would be better off delaying software to deal with the glaring bugs.

But it’s hilarious to me that Apple gets made fun of for quickly releasing updates. It seems they can’t win. How long have we asked for Apple to get quicker with their point updates to address issues? Yet when they do, they are maligned in some circles of the web.

I for one welcome frequent updates (notwithstanding the fact I wish they weren’t necessary).

Currently installing on devices, will let you know how it goes!

Yes, Apple should have great software out of the gates. But we live in reality…t it’s hilarious to me that Apple gets made fun of for quickly releasing updates.

Those who remember much more stable OS releases for many years prior to this yea, are rightly disappointed in Apple for repeatedly releasing half-baked fixes, over and over, to correct initial releases that were problematic … even when promised elements were removed for not being ready. It’s not making fun of Apple; it’s calling into question the decision process to release (and release and release) OS updates, including ones that created additional problems (like the background process killing bug).

Apple is no indie developer and asks for a hefty premium. Current OS updates are amongst the worst I remember.

Apple is no indie developer and asks for a hefty premium

Did they force an upgrade or charge for it? Again, not saying I’m not also disappointed when they stumble, but let’s also not pretend they force update devices to the new software.

they need to do much better

I totally agree they need to do better!

it’s calling into question the decision process to release (and release and release) OS updates,

Honest question. Given the initial release needed fixing (I agree I wish it was better out of the gates), would you rather have multiple fixes spiraling into a better product or wait longer for one bigger fix? I don’t think there’s a wrong answer here, but I think I’m in the camp that I’d much prefer more frequent releases, fixing stuff as they can.

Interestingly, I believe @ismh talked recently (maybe it was Connected?) about how this would be a great time to start breaking away some of the apps from OS releases. Wouldn’t it be awesome if Mail, for instance, could be fixed without waiting for the iOS team, etc?

Interestingly, I believe @ismh talked recently (maybe it was Connected?) about how this would be a great time to start breaking away some of the apps from OS releases. Wouldn’t it be awesome if Mail, for instance, could be fixed without waiting for the iOS team, etc?

This is one of the few things I miss from Android.

Given the initial release needed fixing (I agree I wish it was better out of the gates), would you rather have multiple fixes spiraling into a better product or wait longer for one bigger fix?

I’d rather fewer, better fixes. This stream of regular updates has resulted in additional problems that didn’t get caught before release, like 13.2’s accidental overly-agressive killing of background apps.

Even better than slow updates would have been a delayed initial release that was better tested.

Don’t believe the hype. I’ve had no significant issues running iOS 13 since 13.1 I think it was, on four devices in our household.

Fundamentally, does 13.2.3 draw a line under the instability and plague of bugs have beset iOS13?

How many of these bugs have impeded your ability to use your devices though? I’m sure they’ve been there but they must be pretty innocuous.

We have about 150 iPhones deployed at work. We have had tons of issues with the mail app. I have users that send an email and the recipient gets the email, but there is no body to the email, it is entirely blank. If you look in the sent folder in mail, it appears fine.

We have users send emails with attachments and they are received without the attachments. Nothing to big to send, just part of their normal workflow that they do all the time.

All three issues are fixed by force quitting mail and restarting it. A lot of our users aren’t technical and this is a bigger issue for them. On 13.2.3 we haven’t seen the first two issues reoccur yet, but the third is still an issue and I have it on my phone (11 pro max) as well.

If you follow any of the developers podcasts, the issues have been big for them as they try to code around issues that they have had with their previously working apps.

For me personally, the issues aren’t huge and I’ll put up with them just to get the new Silence Unknown Callers enhancement. At work they are much more painful. I started with the iPhone 4 and this is the worst iOS release I’ve seen. As others have said we pay a premium price (talking hardware cost here) and expect a premium product. This release has been anything but.

Feel the annoyance factor of an app, such as Audible, freezing on start-up several times a day…

The recent release seems to have cured this and Libby now actually runs on another tablet.

I am still seeing some issues with IOS13 and iPadOS. The most pressing one for me at the moment is, that after a week ‘n a half or more, I am STILL moving folders and stuff from iCloud Drive to Dropbox (because of Apple’s issues). I am being forced to do this ONE-FOLDER-AT-A-TIME. Why? “Unable to connect to helper” keeps popping up if I try to do batch moves, (THAT’S Apple, not Dropbox). I have set aside three hours of each day just for this task. THAT’S expensive for me in time. TIME can not be replaced.

Same issues with Apple Mail as mentioned above by another poster.

Not even going to keep listing broken stuff.

The physical appearance of my iPhone XR still looks good though!

I’ve said it before, and I will say it again. This OS release has brought to EVERYONE’S attention just how dangerous it is to depend on just one product for all your needs. Doesn’t matter if we are talking about a software company, a electric power grid supplier, or your mode-of-transportation. There needs to be diversity for everything to continue to flow.