Hi,
I’m loving Unclutter on my Mac and would like to be able to use something similar on iOS. I have sync my notes on Dropbox, so everything is there. I’ve tried to use the Dropbox edit text file workflow, but it’s tedious to create a note. So do you guys have an app that could do this? Unclutter’s displays text files stored in it’s folder without problem so I just have to have an app that syncs with dropbox in a folder of my choosing and I should be golden.

Most good iOS text editors will open files in a Dropbox folder system. I used to use Byword, now I use IA Writer for basic text files. (Ulysses can also open/save to Dropbox, but I prefer to keep all my Ulysses files together in iCloud.) 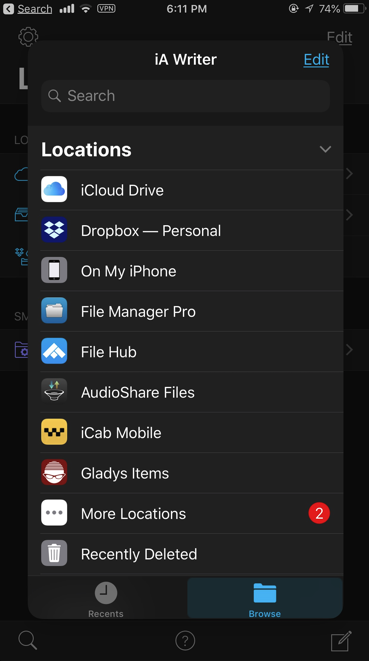 But again, most decent text apps can open/save from Dropbox.

thanks @bowline, a bit too expensive for my taste. I was using Simplenote on the iPhone, but it has it’s own sync, that’s why I wanted something to get to my Unclutter text notes.

a bit too expensive for my taste.

Like I said, there are LOTS of quality apps (and a lot of garbage ones) that link to Dropbox. $5 for an iOS writing app is too expensive for you? Okay, but I think you’re missing out on a universe of well-designed, stable, powerful apps that are bargains for their price.

For free try Permanote (US link).

And of course Dropbox’s own Paper app is free.