Although Alfred seems more popular, Launchbar is grandfathered in with me for now.

Any similar issues or anyone know the LB status?

Oh, following! I’m also still dedicated to Launchbar so will wait to hear about compatibility before updating to Ventura.

Any similar issues or anyone know the LB status?

After a brief stint with Alfred and Raycast, I am back again with Launchbar. After the Ventura update I have found no issues.

I’ve been monitoring the website like a hawk but have seen no indications. Launchbar is still my favorite, so I hope for an update and to see this great tool thrive.

I have been using it mostly as normal. A couple of things I can no longer do are (1) activate the lock screen from the bar; and (2) it does not seem to play well yet with the new system settings, but maybe that was just an issue of the database still indexing.

I guess that means that I am having no problems at all (so far) with LaunchBar.

I’m also using Launchbar on Ventura and it’s fine. I agree that it would be nice to see more active development and engagement, but it’s been this way for years. I’ve tried all the other launchers, but keep coming back to Launchbar.

Ok thanks for the updates everyone.

Overall seems to be working well it sounds like. Hopefully continues with development updates. 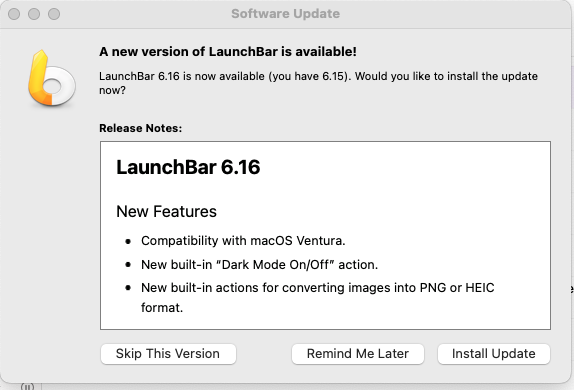 Here are the full release notes:

Woohoo! Have been waiting for Chrome history access to be fixed.