Katie and David talk about the state of PDFs in 2018, how the PDF format has evolved, and best practices for creating, naming, managing and working with PDFs.

Thank you so much for this episode. I often have issues with PDF’s in various use cases, and I just haven’t had it in me to spend the time troubleshooting.

Anyone use the SCANNABLE app?

Yes I use it on my iPhone all the time, usually to put resulting PDF into Dropbox (home) or OneNote (work), although I do use Evernote.

Scanner Pro has been my go to for years!

Scanner Pro is my most used app.

One tip when using the print interface on iOS. If you’re using an iPhone with 3D Touch (6s or newer), you can 3D Touch on the print preview pages instead of pinch to zoom.

I use Scanner for Me, it’s a nice little app for scanning. It also has the auto-scan feature which was my main reason for upgrading from JotnotPro.

Sharing some quick notes from this episode: 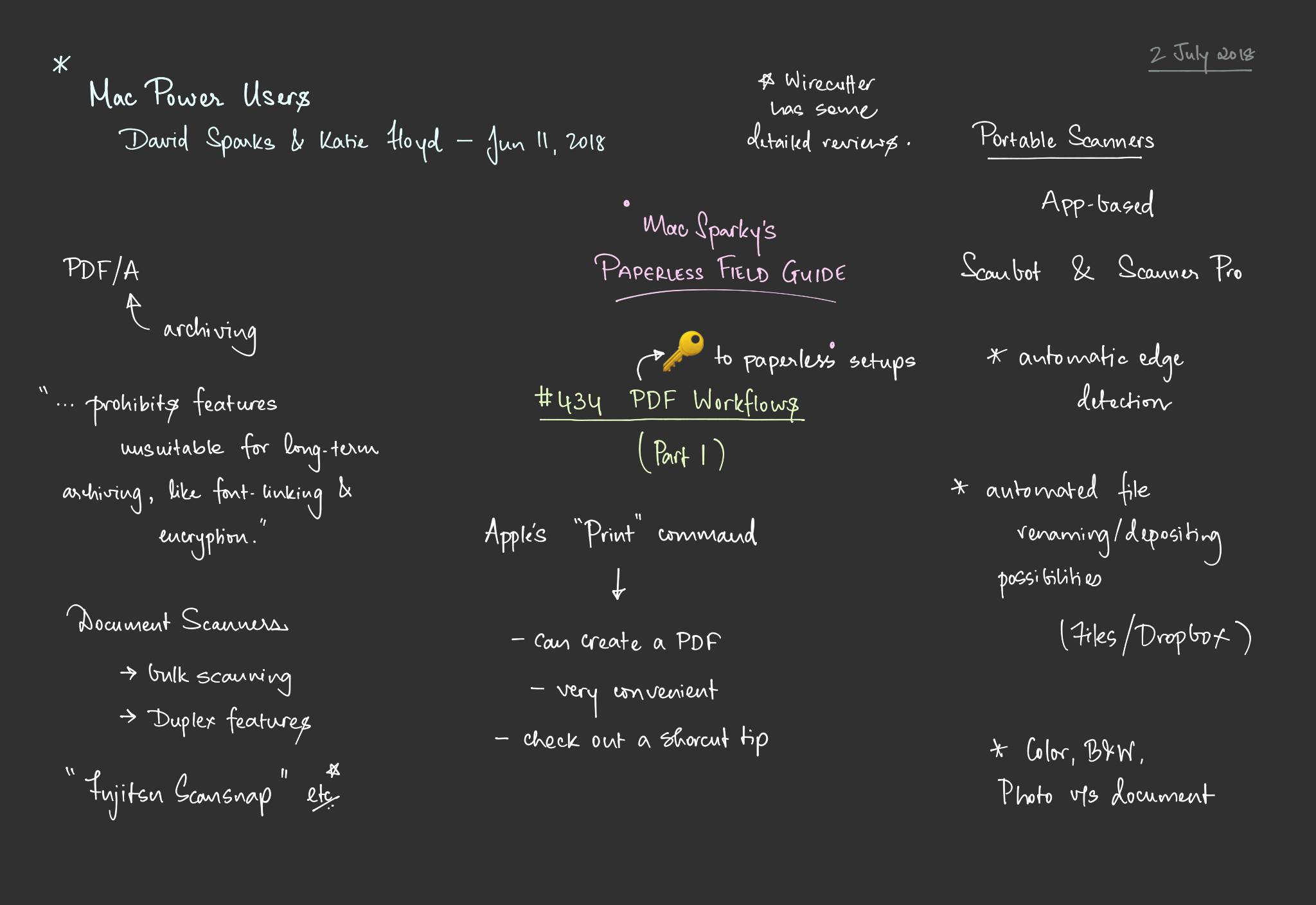 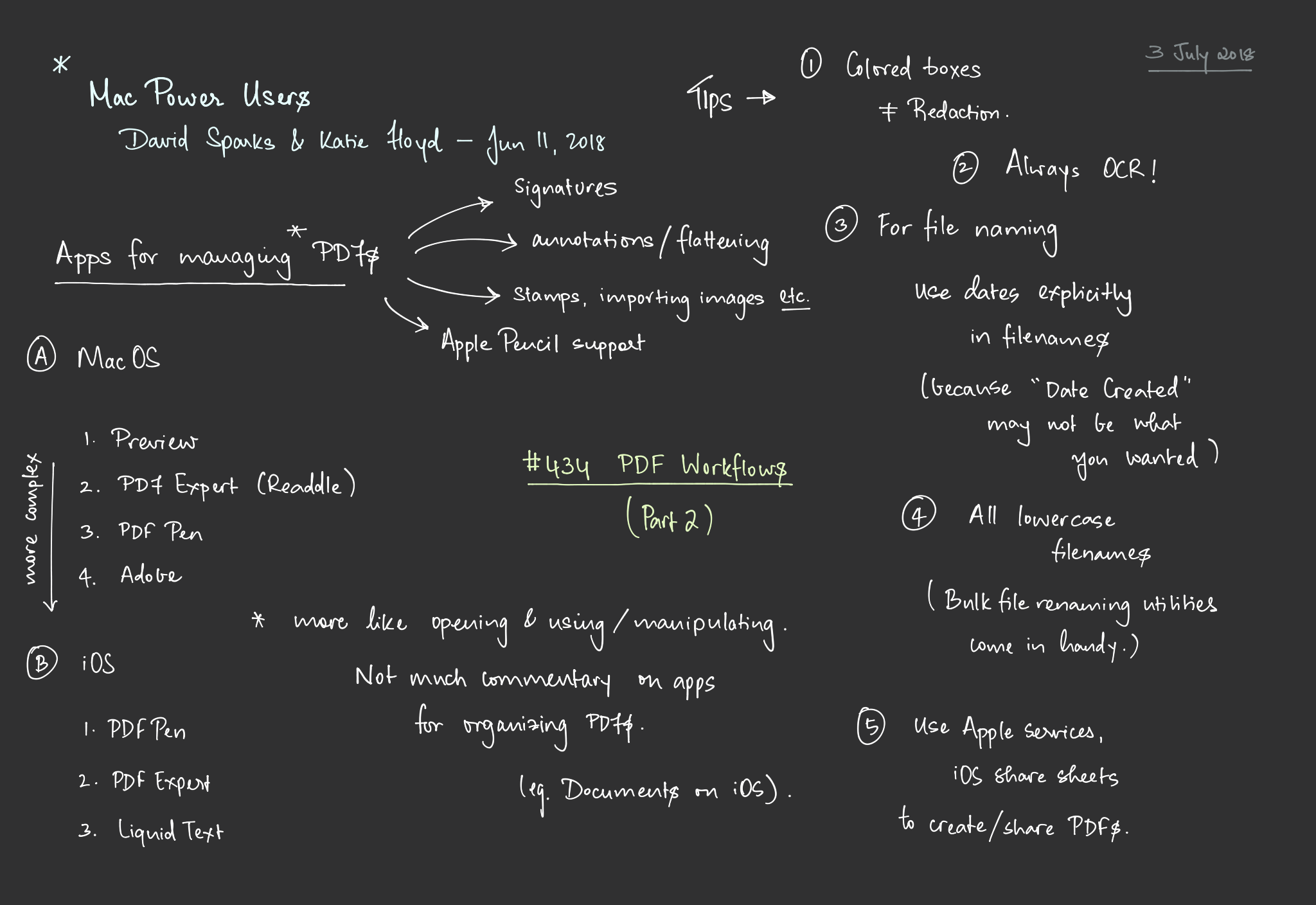 I think just assuming a Multi-Function printer with a document feeder will not work for someone, escpecially when they’re just starting out is bad advice.

My Brother multi-function printer’s document feeder does duplex scans, and OCRs and it does it just as fast as the lower end ScanSnap models.

Frankly, I think it was poor judgment to talk about this topic on an episode where ScanSnap was one of the sponsors. It made half the episode come off as a ScanSnap ad.

Especially when you basically told the audience that a printer with a document feeder wouldn’t work. Which is probably not the case for many people.

Agreed! And for me, the workflows make t brilliant… the best out there and I have tried the lot!

I actually think it has the quickest automatic scanning, especially as compared to scanbot. The only problem is that its workflow is understandably designed for Evernote. The other workflows are pretty clunky. It’s also awesome for scanning business cards. If you use Evernote, scannable is a no brainer.

Hey guys, great episode. But there’s always that “one more thing” (not in a Jobs way).

Does anyone does know a way to deal with those scanned books with 2 pages-per-sheet-documents?

I know Abby finescanner (iOS) has a neat (cloud-based) way to create book scans by separating pages on capture, but it does not do the trick with existing PDFs.

PDFPen folks suggested a mix of duplicating, cropping and interleaving via Apple Script. While that seems to be doable, it’s definitely not as straightforward as I would like it to be.

So does anybody know a way to reliably and easily?

Love your notes! What did you use to make them? My handwriting remains a mess on the iPad. Pencil + glass = slippery.

Ah yes, Peek’n’Pop! Thanks for the reminder!

Thank you! Sorry I missed the notification on your message…

I use Noteshelf 2 for the notes (my favorite note-taking app so far, with Notability being a close second). The glass issue is mitigated a little bit by the Paperlike screen protector, which I also use - but I suppose any matte screen protector would achieve a similar effect.

Paperlike sounds perfect. Is it easily removed or once it is stuck is it stuck forever?

Interesting. Do you have the model of / a link to your printer/scanner with doc feeder @Sgoetz ? Sounds handy.