Mac Studio gets warm when asleep

Has anyone else noticed this? When my Mac Studio Max is fully asleep its fan turns off. When I wake it the temp will be up to ~120º F. It quickly cools down to its usual temp of ~95º F once it is in use. While I have no doubt this isn’t enough to matter, I found it a bit odd that it can run as much as 25º warmer when it’s asleep. I expect the opposite from a sleeping computer. The top of the computer is actually warm to the touch when it is fully asleep.

The catch is, often it isn’t actually asleep, it seems to wake up a lot to do things and the fan will kick on (not that I hear it, I just check for airflow sometimes). It’s usually in the morning when I notice it getting warm (the top is warm to the touch when it is fully asleep).

This is not behavior I have ever seen on my M1 Pro MBP, which never gets warm.

I don’t own a Mac Studio, but this seems unusual to me based on my experience with my iMac Pro. Have you checked Energy Saver settings? Did you start this machine fresh or migrate things over? Just wondering if some old setting from somewhere doesn’t jive with the Mac?

(I’m sure you’ve already checked all this and thought through all this, but thought asking here would help narrow down possibilities for people smarter than me who might be able to help.)

Just woke up my Mac Studio which registered a temp of 77° F (about 5° above ambient air temp). Enclosure is cool to the touch.

I should have been specific, but is that the CPU core average? That is the default iStats menu puts up.

Yep, went through everything, have everything set to sleep, don’t wake up for LAN, etc. Set up as a brand new Mac.

I am watching the process, nothing seems out of control. WindowsServer seems to be the most active app in the CPU chart.

I’ve got the exact same problem with my Mac Studio Max. I’ve spent hours on the phone with AppleCare with no solution. Resetting NVRAM and SMC did nothing. When in sleep mode, it turns off the monitors and the fans, but continues to run. Mine, too, gets up to about 90F and is consuming ~120W. AppleCare says that this will not damage the system, but clearly something iw wrong. Otherwise, it runs perfectly.

This problem started intermittantly and has become constant. When it did properly enter sleep mode, the power consumption was <20 watts.

I just filed a report about this at: apple.com/feedback. You should do the same. If the outside of the case is 90F, the CPU is much hotter. Natural convection currents through the heat sink seem to be able to keep it steady at 90F measured on the top of the case. But, if my office gets hotter, I’m assuming that it will also get hotter, whereas if the fans were running, they would speed up to keep the temperture lower. The solution seems to be either just let it run, or shut it down.

For the past several days I’ve not been shutting my Mac Studio Max down at night. It has never gotten hot or even warm while we’re both asleep.

Have you checked to see what if anything may be running?

Thanks for posting @Danfried2, glad I am not the only one. Although most people would never know if it was happening unless they are constantly checking the temp or putting their hand on the machine after it’s been sleeping for several hours.

I am not surprised Apple Support couldn’t help, that’s why I never bothered to call them.

I have stopped worrying about it since it doesn’t seem to be too high of a temp. I did buy AppleCare just in case. I will send in feedback as you suggested.

Have you checked to see what if anything may be running?

Nothing is running. Nothing is in the logs. It is just idling with the fans off, so heat builds up. It doesn’t do it every time. The only time I notice it is if I touch it first thing in the morning before I turn it on (sometimes in the afternoon if it’s been asleep" for several hours. If I check the temp history in iStats Menu I can see it through.

Did you ever edit the fan rules in iStat or other application?

I’ve had my Studio Max for a month and it never gets even warm to the touch. On iStat, fans seem to run consistently at ~1300 rpm, Total power rarely exceeds 25 w. For me this platform is rock solid.

I have not changed anything. I just know there is no airflow out the back when it is sleeping.

Do you have “Power Nap” activated in the Energy Saver settings?
In that case, while macOS is in “sleep” it is doing a couple of things still in the Background like TimeMachine, Mail, iCloud and so on.

I said it’s idling when in sleep, but it’s not, it is sleeping. Here is the last hour. I put it to sleep, and you can see it waking up to do things. 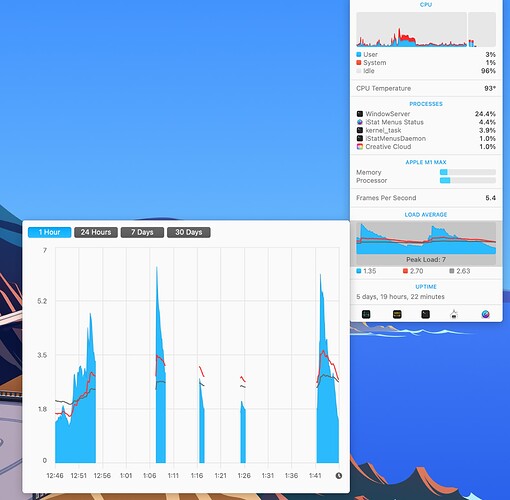 Here is the temps in that same hour. As you can see, it’s getting warmer as time goes on. If I don’t wake it, the temp will go up to 120º F and just sit there. Once I wake it up, as seen on the far right of the graph (the middle spikes I did not wake it up) the fans come and it quickly cools off. 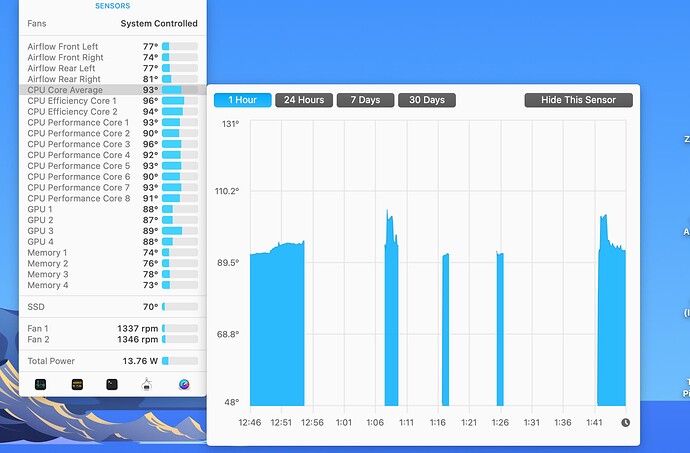 It doesn’t always do it. You can see the middle two turn ons, the temp was low. I will do screenshots from several hours of this, that shows what is happening better.

Oh, OK.
I wasn’t aware of that, it is still available on the Intel.
Is there maybe something that blocks the airflow?

Is there maybe something that blocks the airflow?

Nope. When it’s awake I can feel airflow. When it’s asleep there is no airflow. It’s not close to anything, just sitting on the edge of my desk.

My theory is the power supply is generating heat when it’s is sleeping and that is raising the temp in the case. So after 8-9 hours of it being asleep, that is why the case is warm in the morning. (It takes several hours before I can feel the case get warm.)

I am not that worried about it. I don’t think 120ºF will hurt anything. I was mostly curious if anyone else had the same problem or if something is wrong with mine. I think it’s the latter, but as I have said, most people would never notice if it is happening.

Acc. to the Environmental Report it should have a power consumption of .32W during the “lowest power mode”.
I doubt that this would be able to rise the temperature by 30°F.
I found a message on the Apple Forum with complaints about High Power Consumption while sleeping for a MBP connected to a Studio Display.

Thanks. I don’t have anything that can check the power usage, I should probably buy a meter.

I think I will start shutting it down at night and hope a future macOS update fixes it. Not much else I can do at this point,

If it is really a problem with a too high power consumption while in sleep, I would open a ticket with apple, and request a solution. If you have Apple Care, or a guaranty by law, ask for an exchange.
Something like that could cause a faster decrease in lifetime of the equipment, and a much higher power consumption, compared with the one, you bought on the paper.
Even if it sums up only for 10W/h, and if it becomes warm, I would expect significant more, this will result in 120W for a half day, 3600W for a month, and 43 kW/h in a year.
In Germany we have at some power companies already seen a price of 1€/kW/h.
Over the duration of the lifetime of a Mac, this sums up.
And in the worst case, it might even produce some damage, if it gets worse, and you get a short-circuit or something similar.

I guess I need to contact support. Here is exactly what it is doing through screenshots. This waking up the computer first thing in the morning after it has been asleep for 8 hours. 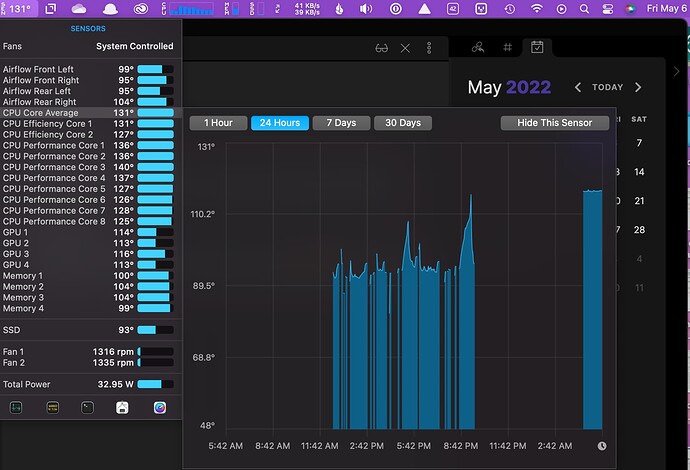 CPU usage from the night. 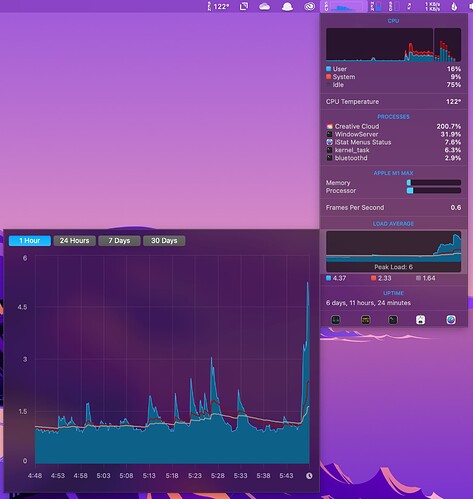 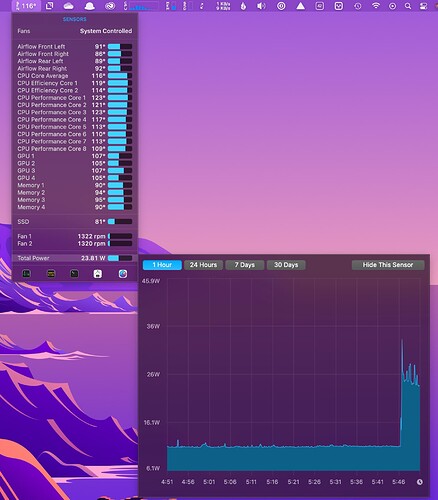 This shows it the best. I woke it up at 5:46am. It does look like iStats Menu is acting funky though, the temp couldn’t have spiked to 131º F for a second or two. But the Studio was warm to the touch on top, which it never is unless it’s been asleep for several hours.

Anyway, it clearly shows it running warm for the hour before I woke it up. The the temp spikes for some reason and then go down as the fans are now on cooling it.

I do wish I could get confirmation from someone that, if the computer has been asleep for several hours, and they put their hand on top of the machine, is it warm to the touch? Mine is only warm if its been sleeping for hours, durning the day it doesn’t get this warm to the touch because I am constantly waking it. 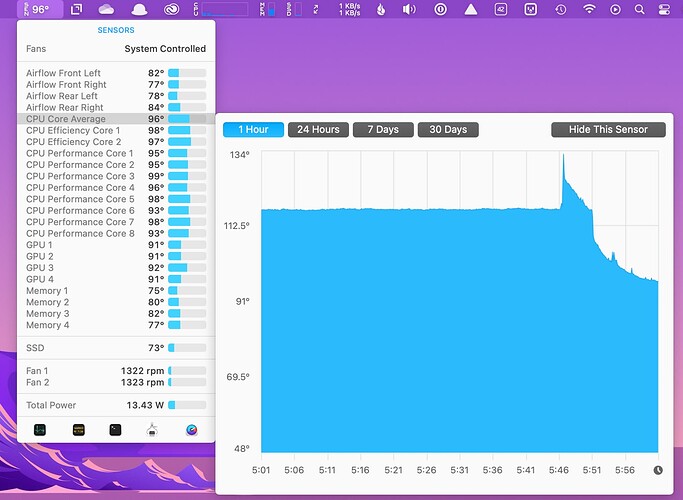