Mac Studio gets warm when asleep 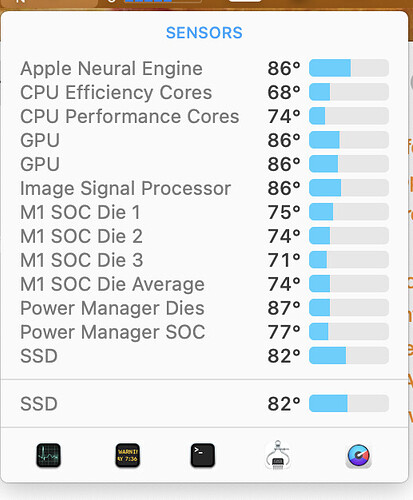 Weird. I wonder if I need to uninstall and reinstall. Doesn’t appear to be any settings to change that.

Yours is a brand new system. Maybe iStat Menus is not up to speed yet with that model.

Are you also seeing just the one sensor in TG Pro?

It does show everything, thanks for the idea. I probably need to reinstall iStat Menu.

Version 6.62 is the latest release of iStat Menus and says it supports the Mac Studio. What version do you have?

Sorry, this thread is getting confusing. I don’t have it on my Studio anymore. The sensor talk above was about my MBP M1 Pro. iStat Menu is up to date on it, but the only temp sensor it shows is on the SSD. This wasn’t an issue on my Studio when it was installed.

My M1 MBP only has one temperature sensor according to iStat Menu, and that’s on the SSD.

At some point did you hide sensors in iStat Menu?

Nope. Didn’t make any changes. I am sure it’s just a bug and I need to reinstall it. Not too concerned about it.

Sorry, this thread is getting confusing. I don’t have it on my Studio anymore. The sensor talk above was about my MBP M1 Pro.

Okay, I am very confused. No more comments on this topic from me.

The info I posted may have been misleading. The power display only shows the Studio’s power - not the displays. When new the Studio’s power consumption while in sleep mode was <20W and would jump to ~120W when on. I taped a piece of tissue to the back and can see that the fans are always on when it is awake, but off when it is in sleep mode. But, it really isn’t in sleep mode. All that sleep mode now does is stop sending a signal to the displays and turns off the fans. Yes, clearly there is something wrong, but after several calls with AppleCare, they can’t figure it out. I’m not the only one with this issue.

I can measure the temperature at the top of the case to be 90F when it has been in sleep mode for a couple of hours. It cools right down when it wakes up. So, I probably should have written that it gets warm. I don’t think that it’s hot enough to be a problem, but clearly there’s something wrong.

Frankly, it’s too much work to wipe it just to see if some app is the cause. Also, this seems to be happening to more than just me. I can’t say for certain that an app I installed is not the cause, but I need these apps… Not much point to having the Studio without the apps.

I was having an issue with my 2018 Mac mini, and a suggestion was made on this forum to create a second user account, without any of the start up and background apps I normally use.

This was helpful to help determine if the issue was hardware or software related. Although it will not help if the issue is with the OS.

Good luck and I hope you get this sorted.

Ok, that’s about the same as mine then, very warm and cools down when it wakes up. Internally mine is going up to 120º F, so I don’t think it really is too much of a problem. The inside is hitting that temp long before you can feel it on the outside of the case though.

Frankly, it’s too much work to wipe it just to see if some app is the cause.

It is, and I did it twice! It’s not a particular app doing it. It’s the Mac doing things when it sleeps. When I look at the logs, BackBlaze runs fairly often, Time Machine as well. Various other apps will do things. I think that is what happening: the Mac isn’t actually sleeping so it’s generating heat, but the fans aren’t coming on. So it seems this is working as intended. My guess is that I have busier apps than others, that’s why not everyone has this problem (plus how many people are putting their hands on top of the machine first thing in the morning?)

One thing though, after my last format it was getting really warm fairly often. I think this was because it was indexing in the background after I put all of my files back on it. This morning though? It was cool to the touch. I don’t have BackBlaze or Time Machine running on it currently.

Thanks, that is interesting. Very different from what mine does. I really don’t understand why mine is acting so different that everyone else’s. I filled a feedback to Apple, but there must be something wrong with mine. Since it doesn’t do it when nothing is installed, Apple isn’t going to listen to me.

I am ignoring it now.

I have the same problem
Mine is the M1 max version.
Whenever I wake up in the morning and touch the machine with my hand I can feel the warmth.
Mine is a fresh install with no recovery system.
I also do not have iStat installed.
The longer I sleep, the higher the temperature.
If you find the cause of the problem, please let me know.
I purchased my machine from an Apple store in China.
Thanks!

Thanks for posting. I will definitely post if I ever figure it out, please come back and post if you figure it out.

Having this same issue with the Mac Studio I just purchased. Base model config, 2 displays connected via HDMI and HDMI/USB-C. Machine is perfectly cool to the touch while in use because the fans are working, but leaving it asleep for several hours and fans off has the machine noticeably warm to the touch when coming back to it.

I’m honestly not sure how much of a problem this is. I’m definitely concerned that it’s decreasing the shelf-life of my purchase, but I’m even more worried that I’m having unnecessarily high power draw when I’m not using the machine. Given how bad the global energy crisis has gotten, I’m definitely not trying to pay for wattage that I’m not even using.

If you come up with anything please let the rest of us know. I’m super glad I’m not the only one dealing with this. Hopefully that’ll make for a quicker resolution on Apple’s part. This feels like something they could probably address with a software update, so hopefully enough people will bug them about it that it happens sooner rather than later.

Thanks for posting. I will definitely post if I ever figure this out (although I stopped trying) and please post here if you do as well.

At least there is a few of us and we aren’t crazy.