I’m curious, for those who have orders the Mac Studio, did you get the M1 Max or the M1 Ultra?

Technically I did not order yet, but I will be ordering a Max. My company gives out our annual bonuses this month, and I’m just waiting for funds.

Also give me time to reflect on what I really need (versus wish for). And right now, I’m not going to get a new monitor. Some day … ?

Interesting to see these early results and that people are widely ordering Max. I would have thought Ultra. It’s the new shiny, after all.

That’s part of why I did the poll.

Just speaking for myself, I went with the Max for a couple of reasons. First, the performance of Apple Silicon is just so good that event the Max is probably overkill for what I do. I’ve got an M1 Pro in my laptop and basically never make full use of it’s performance. Honestly, if the vanilla M1 were available with more than 16GB of RAM it would probably meet my needs.

That said, even though I don’t need a fraction of the M1 Ultra’s performance, I was still tempted, just to have it. As @snelly said, it’s the new shiny. However, the price premium is pretty huge. It would be $1200 to make the jump to the Ultra ($2200 if I wanted the full 64 graphics core version). I decided I’d rather put that money (and a bunch more besides) into Studio Displays, which I will actually get full use out of on a daily basis.

I basically agree with everything you said. The M1 is not enough for me and my workflow, but I am pretty certain the Max is more than enough (given it is 1.5-2x faster than my current iMac Pro, which never gives me issues).

Hard to fathom who the upcoming Mac Pro will be for, to be honest.

This may sound silly, but the design of the Studio doesn’t fit in the space I’ve reserved for my computer. A shelf on which my monitor stands. It’s just a tiny bit too high. Like 1.5 - 2 cm.

I was basically waiting for a computer like the Studio. But may now decide I go for a Mac Mini anyways. Saves me a bit of money too.

After all issues I had with my 2017 MBP I don’t want to go for another laptop.

After all issues I had with my 2017 MBP I don’t want to go for another laptop.

Upgraded here from 15-inch 2018 i7 MacBook Pro to 13-inch M1 MacBook Air and absolutely love it. M1 runs circles around Intel. Your machine was from the dark years of Apple laptops. I think the clouds have finally lifted!

On the laptop side of things, the performance is nice, but that is not where the M1 shines. The M1 MacBooks don’t run hot and the fans almost never come on. Not to mention battery life. The Intel MacBooks might be fine on performance, but they are far behind on everything else.

M1 Max as it is more than enough compute power for my needs. Need it for the i/o

By the time I do eight 8k simultaneous video stream editing, I will upgrade to whatever the M number is then (probably a double digit number)

holding out for another year or so for the M2

Isn’t the M1 Ultra chip what leakers and prognosticators have been calling the M2?

No. The M2 is the hypothetical future chip using an updated core design (probably the cores from the A15 chip in the iPhone 13, as opposed to the A14 based cores in the M1 series).

But you can buy two Mac Studio Max for the cost of a single Mac Studio Ultra. That upgrade is awfully steep. Looks like you are paying for the M1 chip and the box comes free.

It just seems a little greedy still to want more after “Apple unveils M1 Ultra, the world’s most powerful chip for a personal computer!”

Recently I sold my (Intel) Mini and have moved to “just” a 14" MBPro with an M1Max. It has made some things easier vs working on multiple machines. As such, I will hold off on the Mini (or so I say).

That being said, if I were buying, I would clearly only need the Max, but would wind up buying the Ultra. Just because. Good enough reason to exercise restraint.

My base model 14-inch Pro is the perfect sweet spot for me.

I think the Ultra model is targeted to process-intensive content creation, like high def video, music, etc. For me, I do photography as a hobby, plus document creation and editing, as well as conference calls and WFH office stuff. The Max should be more than enough for that workload, especially with 2 screens.

Max. Pro. Ultra. I didn’t watch the event, but all these superlatives make me wonder if anyone has tried updating Steve Jobs’s old sketch… 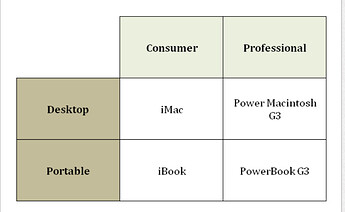 In theory, this hasn’t changed a whole lot beyond recent years. Chip names are honestly a whole lot simpler than Intel’s, but that’s just my opinion.

Ultra is £2k more than Max. i.e. almost double. It was a no brainier for me - given this is a home Mac. And given I’m coming from ancient MBPs.

(I did upgrade to 1TB to contain all the photos and music. I doubt any CPU-intensive personal stuff will have much SSD requirement.)

From varied older web reports, many Mac enthusiasts were super happy with the original M1 chip in terms of functionality and speed.

Next came the M1 Pro & Max. One YouTuber video person stated that he did not need the MAX chip for his video rendering usage and the Pro chip was just fine for him.

As an example with music, I took an old medium complex - legacy Logic Pro song (some audio and sampler and plugins etc). My memory of the CPU usage on my very old G4 was about 75%. That same song on Logic Pro X on a Macbook Pro w/ M1 MAX chip uses about only 4% CPU! So that seems amazing to me.

So it seems that even the Max chip might be more than many might need for daily work. And I would guess that the M1 ULTRA might be reserved for high end Music & Video rendering / production.

For my needs the Max Chip will work just fine.