Making a custom app-picker for Markdown and plain-text files

Problem: I want to open .txt and .md files in any of several apps just by double-clicking them, but I can only set one default app for each file extension. Using non-default apps takes more steps.

Solution: A rough equivalent to the very cool app Choosy (and competitors), which I’ve set as my default browser. It lets me pick which browser to use when I click on links, and even set certain URLs to always open in certain browsers (e.g., open all Google Docs links in Chrome).

Details: I wrote an AppleScript (below) that either accepts a file as an argument or prompts me to open a file. Then it asks me which text or markdown editor I want to use, and opens the file with that app.

The real magic is that I turned this AppleScript into an app using Platypus. Then I made my new app the default app for all .md and .txt files.

Result: Now, when I double-click on a .txt or .md file in the Finder, I can pick from a simple menu of apps. Or I can launch my new app, choose a file to open, and then choose which app to open it with.

Next, I might add to the script so key terms in a filename mean it will always open in a particular app, skipping the selection step.

The same approach would work any time you want to use multiple apps for a single kind of file (e.g., PDFs). 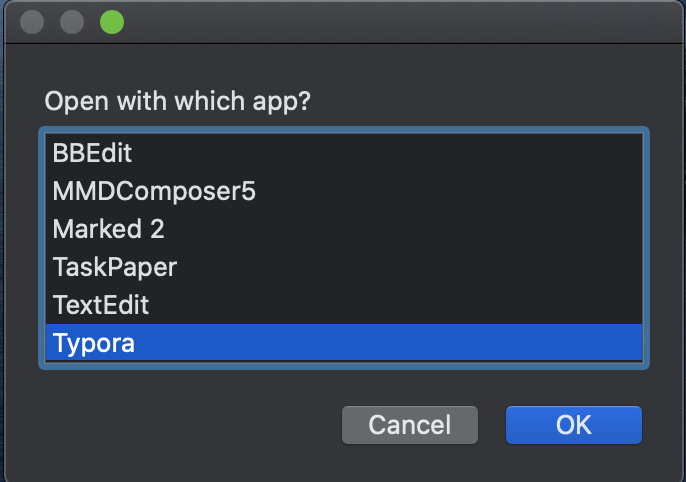 Some tips for turning the script into an app with Platypus: