Moving Windows Between Desktops in Spaces

A recent discussion about Spaces got me started using it again. This has been great. But I have a problem I can’t solve. Well, two, but I’m going to try to tackle one at a time.

It’s my understanding that I should be able to drag a window from one desktop to another. If I take a finder window (or any window) and drag it half way off the desktop, over to the right, I can see the left half of the window. Then when I swipe my trackpad to go the adjacent desktop, I can see the right half of the window on the left side of the desktop for about a half second, then it vanishes. When I go back to the previous desktop, it’s still there on the right side.

Does anyone know what’s going on?

The way I found to do it was to open mission control so you can see your desktops across the top then drag the required window up to the desktop you want.

Thank you. I know you can do that, but sometimes it’s easier to just slide the window into the next desktop. I thought it was possible to do that.

Older versions of MacOS let you do that, I haven’t tried it with Sierra.

ah-ah, think I figured it, grab the window by the title bar and drag it to the side of the screen in the direction of the desktop you want to move it to, keep going till it stops moving (when you’re cursor hits the edge of the screen), hold there for a few seconds, after a little pause your desktops will slide over so you’re now on the target desktop. It would seem you already have to have a desktop in the direction you’re sliding, it doesn’t look like it’ll create a new empty desktop for you. (Note, I’m on High Sierra, don’t know if that will be consistent across other versions…)

I believe I was using drag between spaces as far back as Mavericks, and it works today in Mojave.

I use it routinely to drag new independent instances of Finder or Safari to different spaces without losing the original instance.

As @stu_w said, just drag the window until your mouse pointer hits the very edge of the screen and hold it there, and a moment later you should end up on the adjacent space with your window (assuming that space exists already - I don’t think dragging a window will create a space that isn’t there already).

But for this to work, make sure that in System preferences --> Keyboard --> Shortcuts --> Mission Control you’ve got Move left a space and Move right a space enabled and set to the same keyboard shortcuts that are used in the macro (I’m using ^← and ^→, that is, Control-Left Arrow and Control-Right Arrow). 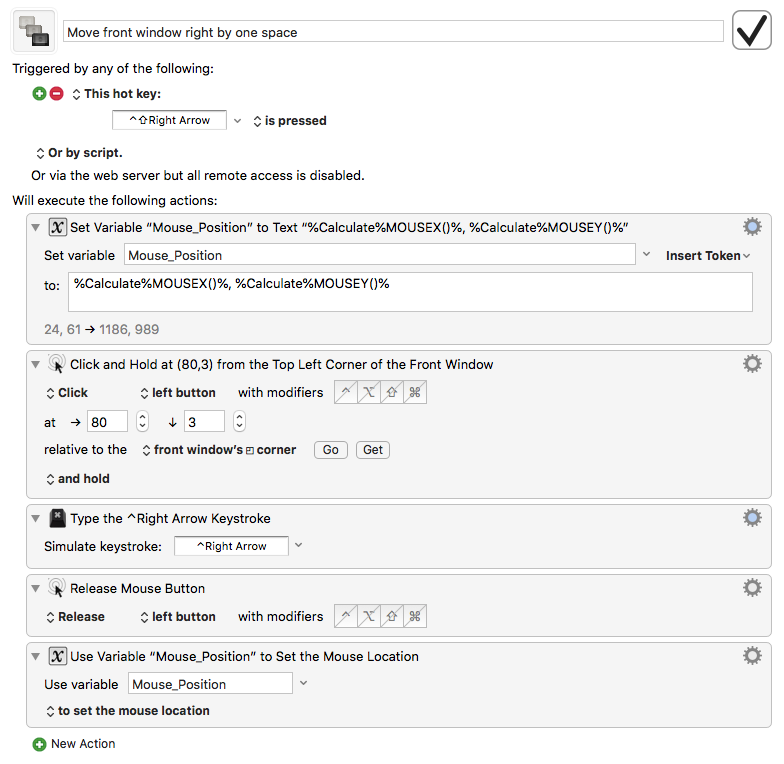 …and an analogous one for moving left one space.

Now, whenever you want the active window to move right or left by one space, just hit Control-Shift-Right Arrow or Control-Shift-Left Arrow, respectively, and the magic happens. (And, of course, you can assign the macro to any other unused keyboard shortcut or trigger that you like.)

That’s even easier than sliding the window manually. Hope this helps