I was glad he went Indy but he’s falling a bit into the YouTube trap. Every day is a “Leak Bomb” upload. I swear being a YouTuber must be sales …where it just eats your life. I imagine many have nightmares awaking in a cold sweat panting “my followers …my followers” “Don’t demonetize me!”

Any YT here can expound on what it’s like in the fast lane? I’ll sub to you.

I feel the same way. I have a small YouTube channel, and have watched many people go the same way as Rene and launch so fast while I keep small steady growth. I stopped watching almost all of those channels though because it’s no longer interesting.

I’m sure I’m paying some penalty to the YouTube algorythm which I’m happy to pay. I figure my channel is about whatever I find interesting. Mostly tech and books, then some cycling and running stuff on weekends when I feel like doing videos on it.

I’m much the same way as @curtismchale when it comes to the YT algorithm. I found myself with a massive bump in views and subscribers this summer due to a posting of a few videos coinciding with events in the tech space (completely unintentional and didn’t even know). I’ve found myself wanting to chase the algorithm at times, but that would be totally disingenuous to who I am.

My strategy thus far is to make videos that I find interesting and videos that my subscribers and community are interested in. I do not intend to make a living from YouTube Ads or sponsorships (ads are enabled on my channel but I’m not going down the sponsorship route). Instead I want to help people as best as I can in the productivity and remote work space.

There has been a bunch of Twitter conversations about this (see below) which boils down to:

I hate the game, but I’m not going to use that as an excuse to fail. Instead, I’m going to play as best and as hard as I can so I can get to a size/momentum that I can increasingly afford to play on my own terms. If you’re not here for it, totally cool twitter.com/reneritchie/st… https://t.co/XD8D9Phj4R

It makes sense when you think about it: People relate to other people, especially faces, especially emotional faces. The internet is a cold, dead place. So people, faces, feelings resonate. Same as book covers, movie posters, comic covers — nothing new or different. https://t.co/QCIe86Ton4

@reneritchie I always have to say this to people that complain about my thumbnails, the data doesn't lie. If people didn't click on it I wouldn't do it. It would be easier for me. I actually asked a YouTube employee directly if they saw it harm a channel long term & they said nope, it helps.

@thisistechtoday Yup. Again, it’s like yelling at a coffee shop that they shouldn’t have a Main Street location with a Neon sign. It’s beneath them. Go without a sign and move out to behind that abandoned barn near the state line. I get it… it just takes some of the joy out of working so hard.

I like YouTube, but I am really not a fan of what the algorithm forces creators to do with their thumbnails, just to get views. For example: @reneritchie is a voice in the Apple / tech sphere I’ve admired and respected for a long time. Check out his progression as a YouTuber: 1/6 https://t.co/vF6oofbA1n 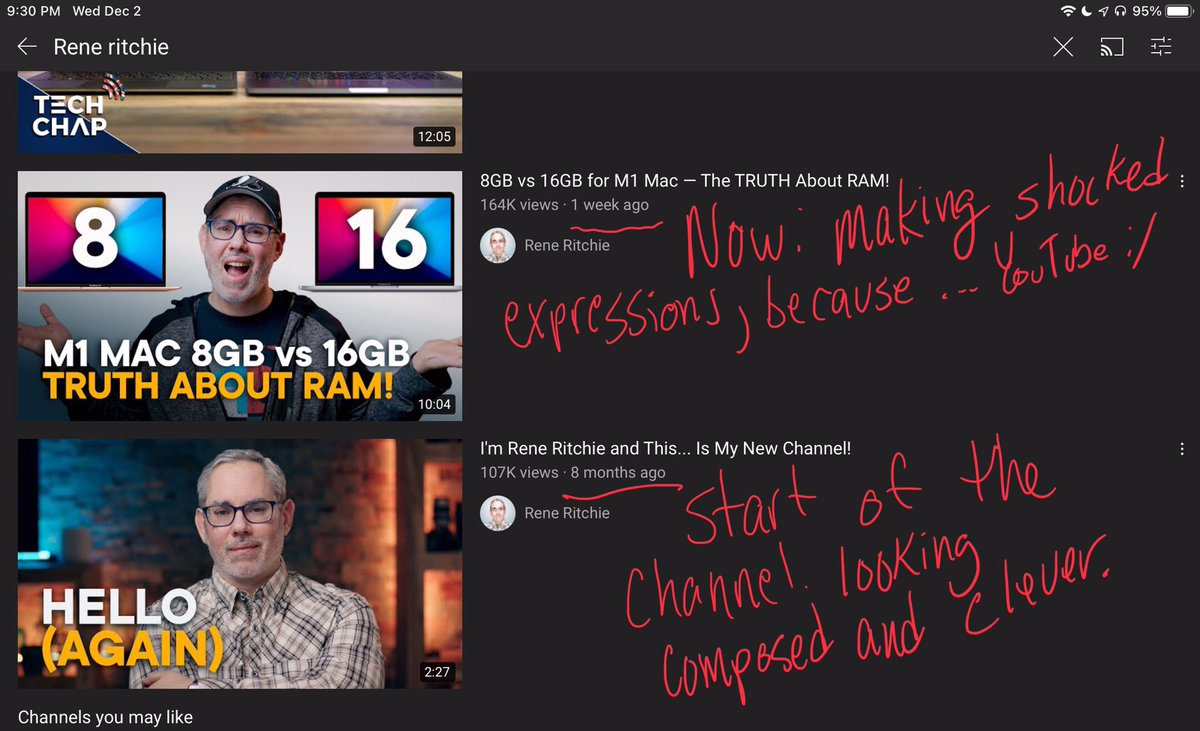 I agree I’ve been a sub to your channel for a few months now. Initially you came through when I was searching for some development videos but I saw you had interest in other areas. Was more than pleased that you introduced me to Bryan Caplan and I just saw your upload on the history of Misogyny which should be interesting. I’l get around to supporting you on Patreon sometime next year.

I"m a fan of Rene Ritchie and whatever he needs to do to climb to where he needs to be. Guys like Unbox Therapy and MKBHD have been on YT much longer.

I’ve noticed Jonathan Morrison isn’t uploading as much content. He must be working other biz ventures I know he’s a big video guy.

Undecided with Matt Ferrell is another channel I didn’t realize I’d like as much. Glad to see him and 2bittDaVinci getting together.

I’m bullish on Independent content. I get so much value with it but the wife and I decided we didn’t need yet another media subscription because YT Premium bundles with YT Music and we already have Apple Music and Tidal.

I also figure that it’s long term sustainable if I stick to whatever I’m interested in currently. I can transition around and some people will stick with it while others won’t be interested in a new topic area. All of this is fine with me.

Let me take this opportunity to say how much I appreciate your content, @curtismchale and @justindirose. Not watching everything because not every theme speaks to me, but I’m always checking it out and I always know it’s going to be thought-provoking and rich in content. Congratulations for that and thank you for sharing so much. Much prefer your style than Ritchie’s.

Thank you and you’re welcome, I don’t expect everyone to watch everything. I have local friends here that love the outdoor stuff I do because they see ideas to run/ride and unless you live in Chilliwack BC…that’s not you.

I’m seriously interested in his 8 v 16 video… but I wouldn’t watch it based on seeing that thumbnail. I will check it out though.

I guess I’m not the algorithm’s target audience. I used to love Rene’s thoughtful content, too.

I think that much of the core content is the same, the titles and the “reacts” thumbnails are what changed to fit the algorithm.

Let me take this opportunity to say how much I appreciate your content, @curtismchale and @justindirose. Not watching everything because not every theme speaks to me, but I’m always checking it out and I always know it’s going to be thought-provoking and rich in content.

Thanks so much @KillerWhale. That’s kind of you.

Another example of the YT Vortex. AirPod Max comes out. Capitalize on the excitement to a point. I think most vlogs should discuss the features pre-shipment and then a comprehensive review. This is too much.

Do people really need 5 AirPod Max videos? It’s almost half the channel uploads for the last week or so. Move on.

The idea is more to surface in recommendations/search results multiple times, to get the attention of a wider audience.

It is the “hottest” thing right now. Some people like to make all sorts of videos regarding AirPods Max.

That same guy also creates a ton of videos on Apple Silicon. Should he move on?

My current annoyance with Youtubers are the ones that unbox every color of every new product that comes out. Like I get that viewers want to see an unboxing, but at the same time there are people that aren’t getting AirPods Max under the tree this year and have to wait a couple months because some yahoo needed to do an unboxing of 4 different colors for 1 video. Multiply that by ‘X number’ of youtubers doing similar and you get my amount of annoyance factor.

Very cool subscribed to both

Ignore the videos then. You can mark them as “not interested” and they’ll go away.

Patrick we actually “want” to support these channels, we’re tying to basically find a healthy middle between the need to generate enough revenue to sustain the channel and providing unique content. I think we get Game Theory going on right now with YT algorithms.

For me I’d pay $9.99 per month for a new tier Apple TV + Social account which gives me the best of user submitted videos without the content providers needing to game the system so much. Content providers would get some revenue share depending on views and still maintain the ability to get Apple approved sponsorship (nothing Draconion other than Apple providing the payment processing/distribution just as they would to a developer)