Siri dictation and the Noelle vs Noel problem

Has anybody cracked the code on how to ensure that Siri dictation spells the word you want rather than a variant spelling or a homophone? For example, I have a daughter named Noelle. Whenever I dictate her name, I get Noel. This happens with other words, too. I have tried dictating the spelling of the word that I want but that generally fails. Using my previous example, I either get something like NOELLE, N Oelle, NO elle, N O E L L E, “And 0lle,” or worse “cap on elle”. I don’t mind that I would have to use a particular formulation to get Siri to do it the way I need to, but I haven’t cracked the code on what it is.

This should help with given names: 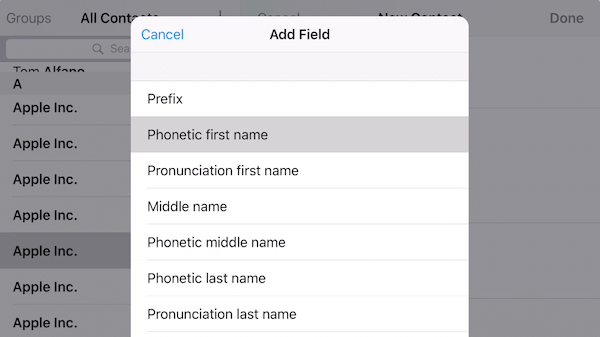 Does iPhone dictation misspell a word you use often? Learn how to correct Siri's spelling in iOS9!

Unfortunately, I’m having problems with Siri on my HomePod. It doesn’t recognize the band ‘The The,’ for instance, no matter what I do.

First of all, it is just ridiculous that we need to create contacts in order to get Siri dictation to work. In iOS 13 there seems to be the possibility to create a dictionary for dictation but apparently it does not work yet.

But I have to blame myself not to really have understood in the past how to fix this with a current OS. Yes, I knew about the possibility to add phonetic fields to contacts. What I did not realize is that you can misuse a single contact to fix up to four words because there are phonetic fields for a name, first name, second name and company name. So, I finally created a contact that fixed two of my permanent Siri failures when it comes to dictation - and it works… The only downside is that I now have a contact that is basically no real contact but only a way of getting Siri to recognize those words I have truly meant. Whatever…

Yes, it sounds a little pathetic not to have connected the dots to solve this issue more early, but it finally has clicked with me when I watched the video. Thank you!

Hopefully, Apple will enable the user dictionary for dictation in the new OS so that this issue will be finally solved in a more elegant way.

This is a very helpful post! Still, it doesn’t address the exact issue I’m facing, but it may make it less common.

How do I force Siri to use the “non-dominant” spelling—whatever it may be—when I need it.

I think I made this confusing with my choice of example. No matter what the default spelling is Noelle or Noel, how do I get it to use other than the default when I need to? “Their” vs “there,” is a better example of the kind of issue I’m talking about (but a poor example in that Siri usually gets that one right).

I cannot get Siri to handle ewe vs you correctly no matter what I try. I have also run into the trying to spell it out problems described. Since I only use Siri when I’ve already got at least one hand full of sheep I can’t even take the time then to try to correct the mess. If I say ear tag tag numbers Siri tries to turn them in to a timed reminder. Ditto for anything that has the words today or next week or any other time unit.

Trying to use Siri for notes I have had problems with handle vs Handel, through vs threw and more I can’t even remember now.

It’s inexcusable. All they need to do is have a database of homophones, so if siri selects the wrong word, at least the correct word is next in line. I guess I’m talking more about Voice control and Siri, but same idea.

I’ve completely given up on dictation - it’s nearly always quicker just using my thumbs (though granted I don’t often have an armful of sheep to slow me down!)

I also have the problem that I can’t think properly whilst dictating, and I pause a lot when typing, which is another reason dictation really isn’t for me.

Reason 3 is I’m rarely in a room on my own, so dictating a message isn’t really feasible even if 1 and 2 weren’t issues.