This is the Office of someone who has ADD.

Once we replace the carpet I hope to get some more shelving.

First I need to reinstall the keyboard tray I need to configure the Logitec keyboard to go between iPad, Windows Machine, and Mac.

I would love to replace my 2013 MacBook Pro but I’m having a hard time pulling the trigger on a $3000 device that I can pick up for $1200 in the form of a Windows machine.

I love the macOS, I’m definitely a convert but right now it seems like Apple is just abusing those of us who like to use the Mac 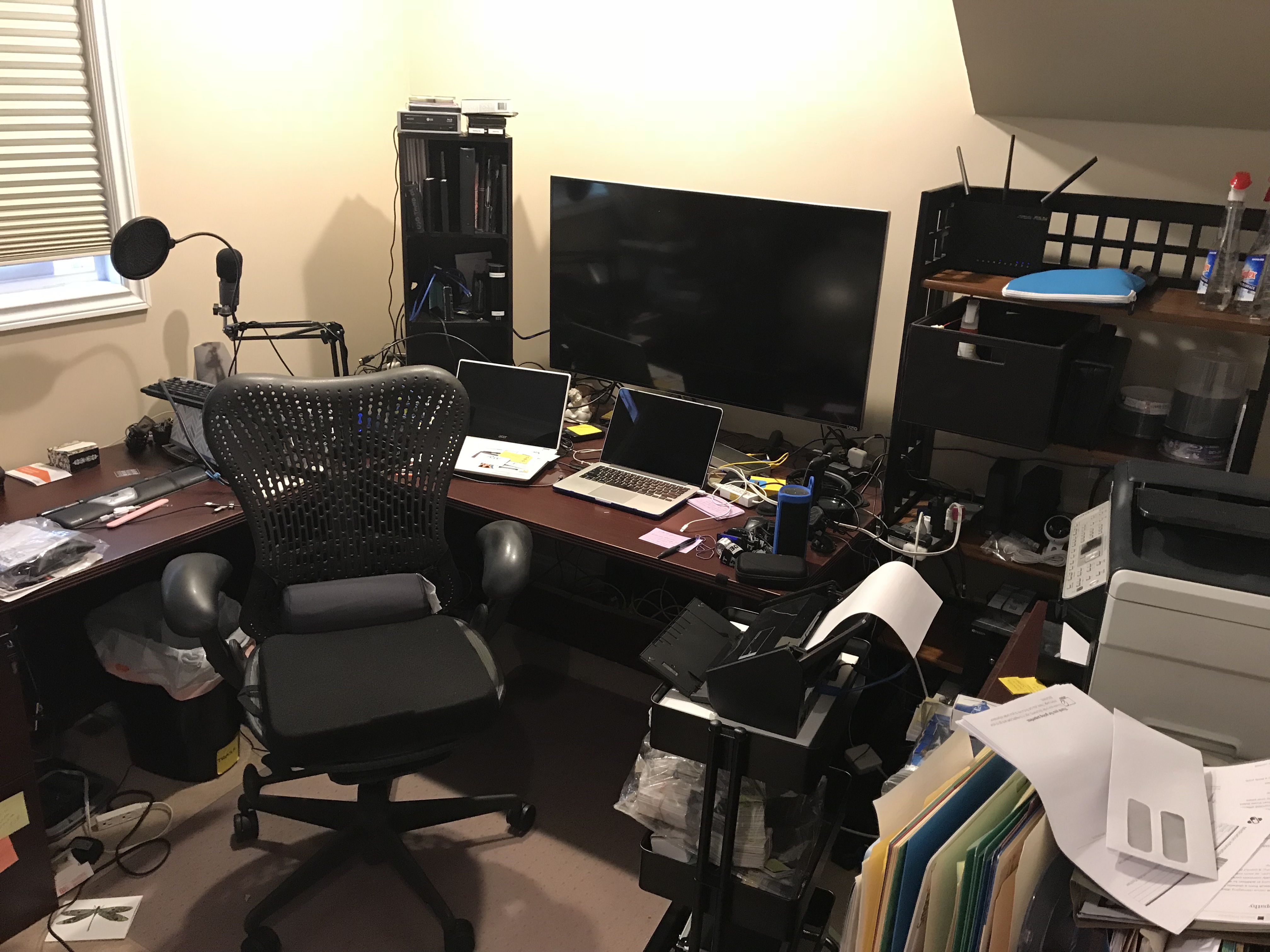 @SteveU75: I hear what you say about the cost comparison between “comparable” Windows vs Mac systems. This is not an uncommon sentiment. I can’t say I haven’t been tempted by some of the slick ultralight portables coming from companies like Dell recently.

That being said, I have frequently seen analyses that ultimately conclude that while superficially similarly spec’d machines are cheaper on the Windows side vs Apple, when they actually configure the Windows machine to true equivalence with their Mac counterpart, the total cost of ownership quite frequently favors the Mac. Part of that may be the far longer usable lifespan of the average Mac vs the average Windows machine. It is very common to hear of even “power users” still using a 5 year old Mac, or even older. In my experience, Windows machines just don’t seem to last all that long. In fact, in the past 3 years in the office, where a Windows machine is required (the big players in the electronic health record space are all Windows based) I have gone through 2 laptops. I generally sell my Macs at the 3 year point when AppleCare runs out, but each one I have sold was still in perfect operating condition and fetched a great price on resale (which if I didn’t have the motivation of also wanting an uograded machine just because, should have taught me years ago not to trade up so often!).

In any case, I agree that there is a certain “Apple tax,” but you also get what you pay for, and it’s enough for me to keep me in the Apple camp for my personal computing.

I appreciate your comments, you’re talking to a guy was running a 2013 MacBook Pro. The only bottleneck I run into is when I try and OCR a large number of files which seems take forever. But there really isn’t any major problem with the machine right now, with the exception of the fact that occasionally the screen starts blinking and I have to reboot. Apple tells me it’s a known problem and they’re working on it.

I have typically found windows machines to last about the same time frame and often longer because you can upgrade the components which Apple goes out of their way to make harder. I added some memory and a larger ssd drive to my 2011 HP Notebook and it is still quite fast.

I am a Mac convert but still the machine would have to run almost twice as long to justify more than twice the price. The last several machines have had other problems as well, keyboard etc. they just have not been keeping up with the price performance curve.

Apple, I am willing to pay a premium for a Mac, just don’t make the price so high that I feel like a sucker while doing so.

Fruitless discussion as Apple has us over a barrel, I guess I just need to wait for the 2018 machines to come out on the secondary market or bite the bullet and get less of a machine than I would like and do the heavy lifting on a Windows machine.

Thanks for your thoughts.