Our Synology DS415+ server died yesterday. The problem is a known one with an issue in the clock of the main processor chip. All of the Synology devices of that generation will eventually fail. I have a good backup of my stuff off the server, I do one every night and that’s how we found out about the issue, my BU didn’t run the previous night.

K was able to fix it but best info online indicates that it will only last a year or 2, maybe more so we are starting the process to look for a new NAS server.

I’m inclined to continue with a Synology but just get a new model.

K wants to look at Drobo but I run WebDAV stuff on the Synology that I don’t think the Drobo supports.
Mac Mini option out due to other machines connecting to it. He has to access it from his Linux machines and I of course need to get to it from my Macs and we have one lone Windows system that uses it as a file share point between the Windows machine and my macs.

FWIW we do use Raid and use WD Red drives in all of our NAS systems.

Edit: given other perspectives, In this case, Synology might be the better choice.

I recommend TrueNAS.
They have diskless systems starting < $1k, or you can get your own hardware and run the TrueNAS software.

TrueNAS Open Storage | ZFS for the Home to the Data Center

TrueNAS is the World’s #1 Open Source Storage. Based on OpenZFS, it is trusted by millions and deployed worldwide.

The software is available in versions from free to enterprise.
I have TrueNAS CORE (free) running in a VM on my Dell server, which is running Ubuntu. I have 8x3T drives, and use the OpenZFS file system, which yielded 16T of useable space, and I can recover from a single drive failing. You can increase this to two drives failing at once (possibly more). OpenZFS combats bitrot by “resilvering” every so often.
You can set the system up to back itself up to a destination of your choosing. Some of these methods only need to copy the diff from the last backup.
They also offer various plugins, such as Plex, but I haven’t used them.
It’s a very robust system.

If I were starting over, I would buy this, rather than the Synology I have (DS918+).

Personally, I would stick with synology since you can put the disks into a new one and be running in little downtime. You already have all the knowledge and wisdom with that system. Your time is worth more than starting a new setup.

If you were starting fresh, then I would consider synology, q-nap, and truenas. I wouldn’t consider drobo because of vendor lock-in.

Echoing what @r2d2 has said. I am currently in the process of upgrading this week. I had a few errors on my Synology (I have backups), mine is the DS1513+ with the same original drives (WD 3TB) After 8 years, it just started to have hiccups. I ordered a DS1821+ and there was a sale on drives recently (not sure if it’s still going) but I got the WD Red Pros 14TB for $380/drive.

You already have the knowledge and usage of Synology, thus saving you time and headache. I used to have a Drobo before my Synology, will never do that again.

I have a DS416play, which is about the same generation as @OogieM’s so I’ve assumed it will die soon. I recall looking into moving the disks from the DS416play into a current-generation model and it was not possible. I’m relying on old research, and possibly faulty memory, but there was an incompatibility between the old disks and new drives. I’d be glad to be wrong, though.

Hmm I wonder what the restriction was for you. EDIT: the limitation is the 416play. At least there are other ways to migrate the data

Here’s useful information about that:
https://kb.synology.com/en-global/DSM/tutorial/How_to_migrate_between_Synology_NAS_DSM_6_0_and_later

Thanks. Good info. I opened a ticket with Synology Support to see if the HDD migration method is possible.

I’m sorry you’re dealing with issues. I didn’t realize that some of them were limited. Fortunately, I have the + series and it looks like they’re all good got hdd migration.

Why is the Mini option out? Linux and Windows machines should be able to connect to a file share on MacOS.

Since you already have experience with the Synology, going with a new model is probably the best option.

Why is the Mini option out? Linux and Windows machines should be able to connect to a file share on MacOS.

WebDAV, Card,DAV and CalDav seem to be the issues.Reports of problems with trying to do that on a mac mini where the clinets are otherdevices. Not impossible but just way more effort than the Synology.

From what I recall seeing somewhere, you could go up a level of NAS, but couldn’t go down a level.

For example, if you have the J, you could get a standard NAS (i.e. not a Plus model) and it would work, but you couldn’t get a Plus model and have it work.

I’ve got a 220+, but I couldn’t take those hard drives out and place them in a value series (DS218 for example) and have them work, but I should be able to put them in to another + model (DS420+) or an XS model and they should work.

Whilst I regret buying the 220+ model (I was seduced by Docker and I don’t use it a lot and where I do, I don’t get on with it), the Synology does do a wonder sharing files.

Regarding limitations in using HDD migration (swap drives between units) for migration from one Synology to another, the Synology Support rep pointed to this. (It’s in the article you mentioned above.)

Your source Synology NAS cannot be any of the following models:

I have the 415play, and that model doesn´t support this

These are backed up on two 4tb toshiba canvas basic external hhd’s, all though ssd’s are drop- and “waterproof” and much more reliable than hhds.
The t7’s are all attached to my mac mini m1, but you could use a usb 3.1 gen2 hub on you linux, or make a home server solution. If you are happy with 480 mb/s, there are many cheaper usb3.1 gen1 ssd’s on the marked.

I guess it is better to do this now, rather than waiting for a nas failure. And my devonthink databases and music-/movie library are finally usable again

The 415play has served it’s purpose! good luck with your choice, and merry christmas

FWIW, I have a DS1812 that’s still going strong, 8 years later (PLEASE let me not have just jinxed it)!

I think I upgraded the RAM when I got it, and I’ve upgraded the drives every few years… And I have 2 backups (2 local drives connected via USB and a remote to another Synology I got to run Plex)… But I should probably upgrade the hardware soon.

Wondering what the resolution was @OogieM ?

Kick the can down the road a bit.

Too much else going on right now to deal with deciding what server to buy, getting it here (already have to drive to town to get packages from UPS because the driver won’t come up the county road in the snow) and configuring it and moving all the drives or data.

So we’re both hoping the fix will last at least until after AnimalTrakker Bull Test code delivery, which is supposed to be on 4 February. Then we’ll have a month to deal with the server before having to focus on shearing, irrigation set-up and lambing.

I would also suggest to stick with Synology. Upgrading to DS920+ could be a good move and it is expandable, so good for future proofing.

At least I have not heard that , unlike Qnap, of too many news on ransomware attack

From what I’ve seen over on /r/synology, there are some changes that may effect your purchasing decision.

One of the big ones being that they will only support Synology own brand drives in the newer larger NAS models. I think the consensus is that other drives will work, but Synology will absolve themselves of support if it’s not a Synology branded drive being used - same as they currently do for adding additional RAM to the NAS devices. This focuses more on the enterprise NAS devices, so the Plus series might be OK.

One of the big ones being that they will only support Synology own brand drives in the newer larger NAS models.

Is there an official Synology, non-Reddit source to cite for this policy? 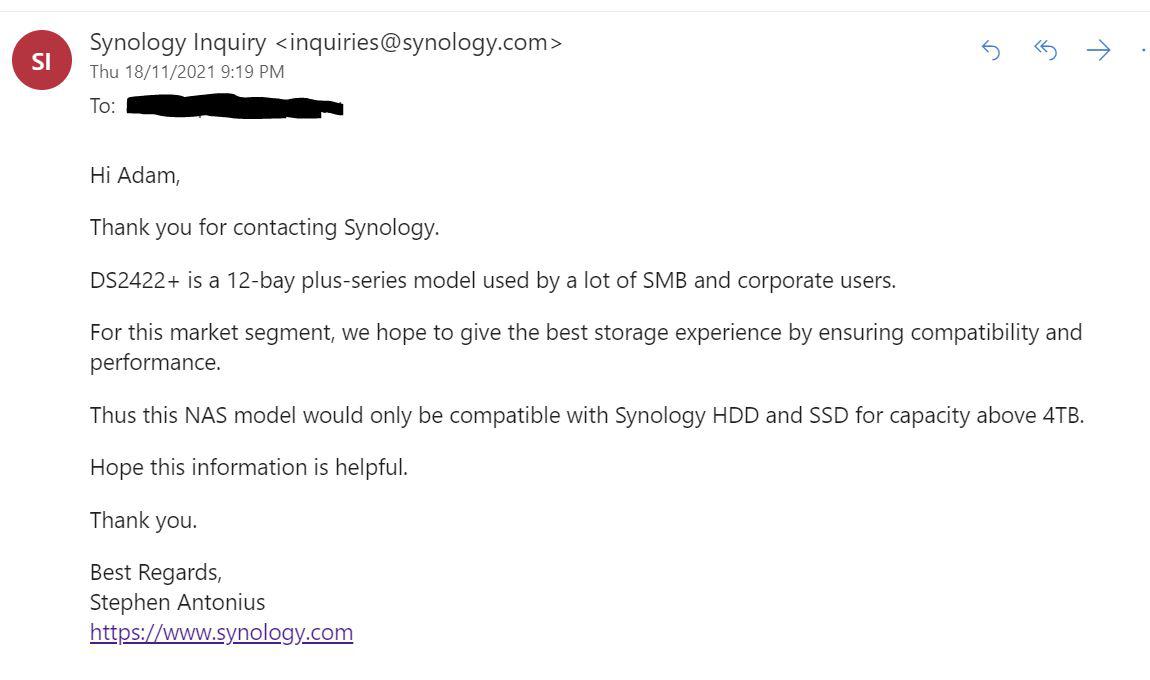 Support email received from Synology support (which could be faked/wrong), but the Synology website HDD compatibility list here shows Synology drives and one WD drive.

I doubt it’s vendor lock in as the Reddit post says, but imagine it’s the same as the RAM (quote below taken from compatibility page as well) where only the Synology RAM is supported (I’ve a non Synology RAM stick in my DS220+ and it’s working fine).