System Overhead if I Keep DEVONthink running on the M1 MBP?

I’m using DT as repository for all of my research and anything else I wish to keep–summary notes of research, a quote surfaced by Readwise, receipts, etc.

I’m trying to determine if I should keep DT running in the background or just dump things in DT’s inbox, which shows up in the Finder as shown below.

There are advantages to having DT running all the time. My only concern is how much memory DT seems to take.

Those of you who use DT frequently, do you have it running in the background or launch it as needed? I have a 14" MBP with 32GB memory. 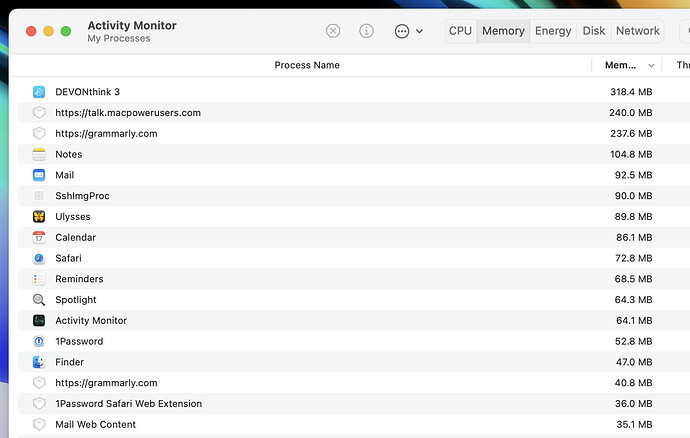 I start DT with the Mac.
I use a couple of rather large databases, and it took several minutes for DT to finish the start sequence, so I have it running, to be available all the time.
The amount of memory, DT is using, depends, as far as I understand, on the size of your database(s).
I have it currently running, with 3 open databases (+Global Inbox) with a total of more than 500.000 Objects in the databases, and a total of more than 500GB size.
Beside that I have a Mail-Program with a couple of thousand mails, Safari with (unfortunately!) several hundred open tabs, and some other apps running, on a 64GB 2017 iMac, without any severe problems.

Thanks for the reply! My overhead is much smaller. I never have more than 5-6 tabs open at one time in Safari I have three DT databases open with ~30K files total so not nearly as large as yours. Also, in addition to DT I only have Mail, Calendar, Notes, and Ulysses running and three utilizes, 1PW, Moom, and Bartender.

Based on your experience, you’d recommend I just keep DT open, correct?

I do not use DevonThink, but 318 MB of RAM is practically nothing and I wouldn’t worry at all.

This is what Activity Monitor basically always looks like for me: 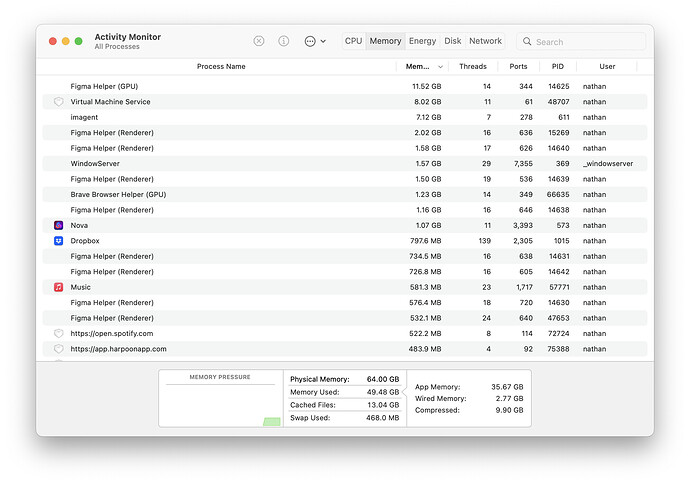 Unless I see an actual issue (rare), I typically leave my usual set of apps open. If I’m done with an app for a while, I might think to close it, but that’s probably not necessary.

I have an M1 MacBook Air with 16GB memory so I’m more constrained than you with your 32GB. Your Activity Manager listing seems to show no strain at all on your memory resources. Let 'em run!

Devonthink has surprisingly low resource usage.
In fact, comparing resource usage and features, Slack (an electron app) should be performing all my work for me, sorting out my love life, and probably start fixing all my neighbours problems as well.