I can’t understand why everyone is in a hurry to ditch their MacBooks and move to an iPad lifestyle.

For my part, there are a couple of reasons:

For a long time, these reasons meant I traveled with both an iPad and a Mac laptop. However, that’s a lot to carry and it costs quite a bit of money to buy two different machines and keep them reasonably current. If I want to eliminate one of them, the iPad has progressed to the point where it’s easier to use it for everything and drop the laptop than the other way around. Especially since I use the iPad a lot when I’m at home, but the MacBook Pro only ever comes out when I’m traveling.

To me, this makes for a pretty compelling case for going iPad only for my mobile computing needs.

@HobbyCollector great to hear - I’ve looked at the Logitech smart keyboard alternative, but feel more like sticking with all Apple, so hearing this from you reassures me a bit that it’s probably just the stance of standing up in the store that made me feel like it’s a bit cramped

@Denny Oh, okay. Yeah, I have the 10.5" - might be why I’m feeling a bit cramped when trying the Smart Keyboard in the store, but I’m starting to think that maybe it’ll grow on me, especially after hearing experiences from others like @HobbyCollector’s

I’m gonna go ahead and try it out when it arrives, otherwise I’ll just have to sell it on eBay😁

The iPad has capabilities that the Mac laptop line doesn’t, like a built-in cellular connection, GPS, touch, and the Apple Pencil. While the iPad is also lacking in some areas, based on the current trajectory of Apple’s hardware and software it seems likely that the iPad is going to gain capabilities that it’s missing much faster than the Mac is going to gain features that are currently only available on the iPad.

I had not thought of it this way, but you make a good point. A new MBP would be faster, but does not do anything more than my 8 year old model.

I’m with MacSparky - a 5K iMac and an iPad. I recently went on a 2-week vacation with only the iPad, and I was fine. The only thing I miss is Rapidweaver, the website builder I use. Sure wish the iPad could mount external flash drives and have them show up in the Files app. I can’t understand why we don’t have that - yet.

Now that we’ve got USB-C on the new iPad Pro I’m really hoping that we’ll see support for external storage in iOS 13.

From what I heard on the last ATP Apple has established no limitations to developers, so a company like Western Digital or Seagate could provide an app to allow access and file transfers of external drives connected via USB-C.

As for Apple itself, I think that this will definitely be announced for iOS 13, along with a springboard redesign, next summer at WWDC.

By US standards our condo is not large. But we run two iMacs each in a different room. iPads only could free up many square feet. Also we have three outdoor locations with tables where iPads and Bluetooth keyboards work easily. (not a fan of attached keyboards) 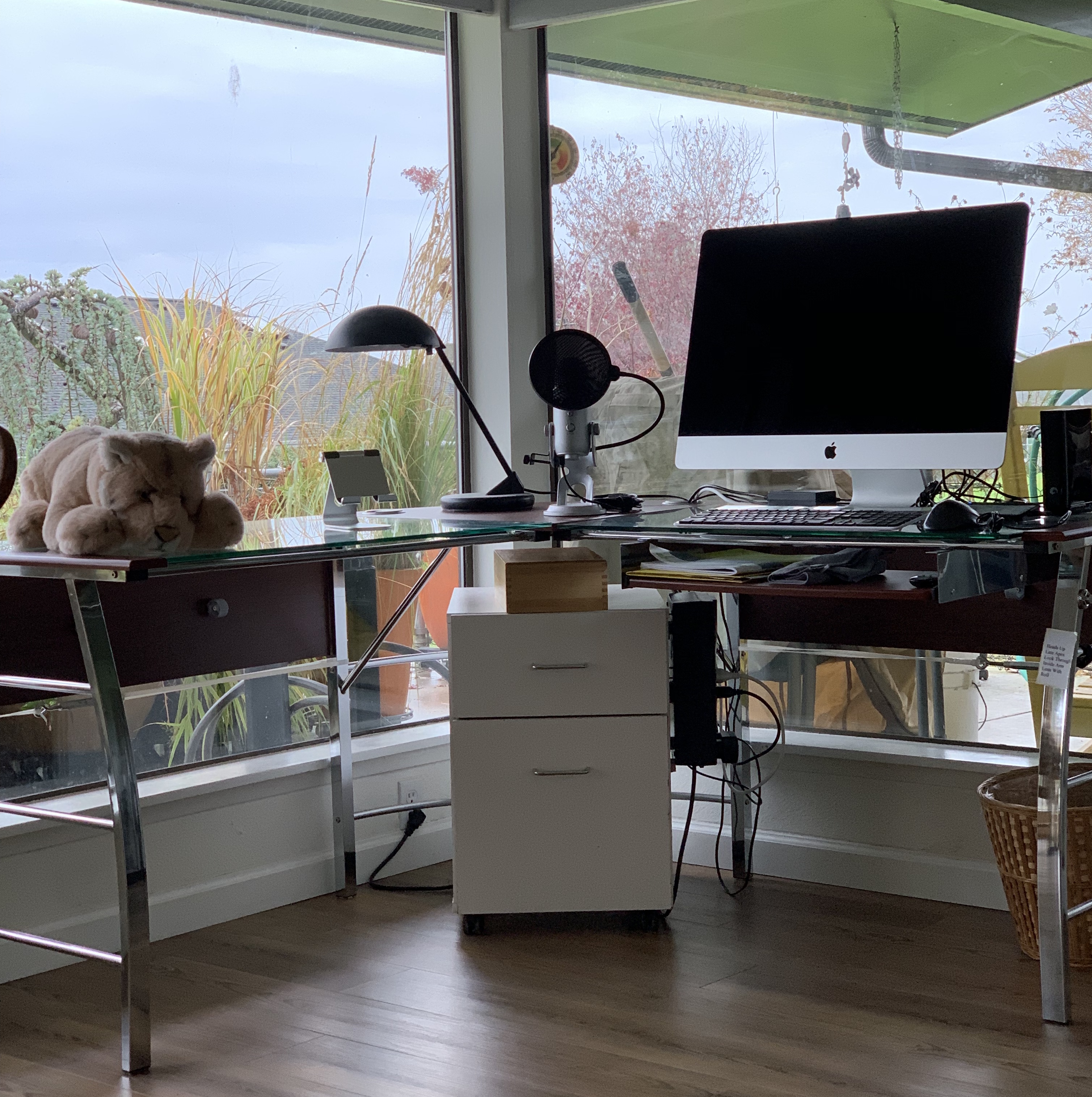 I think it’s referring to the Microsoft Puck! 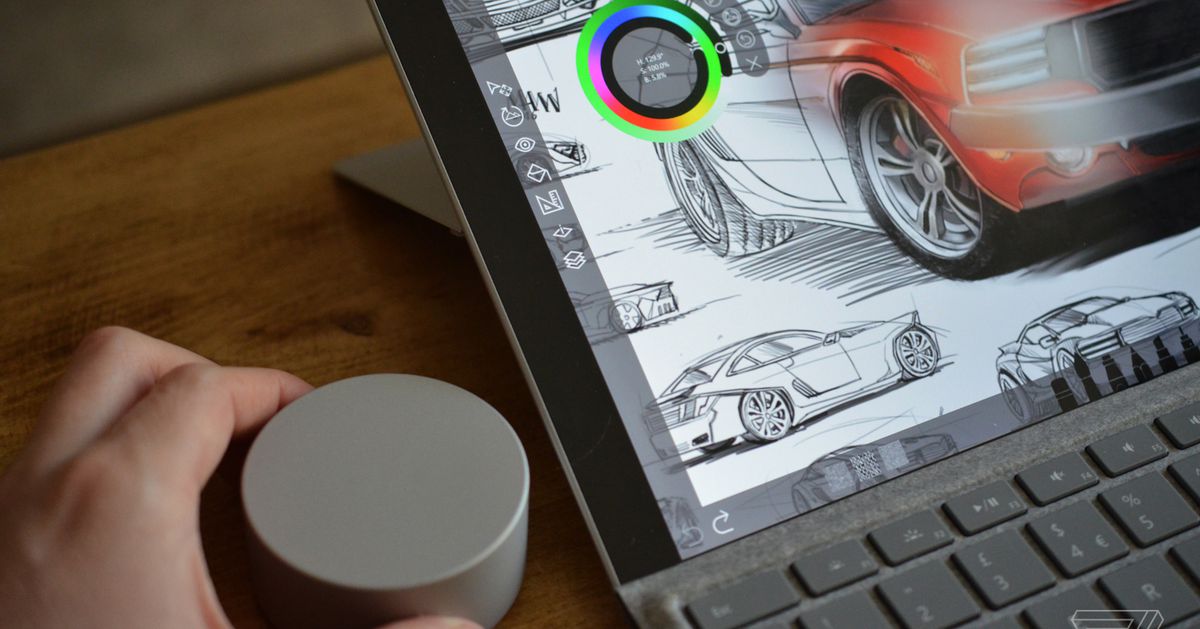 Microsoft unveiled its Surface Studio PC last month, alongside a crazy-looking Surface Dial puck. The new accessory is, perhaps, the most surprising and unique part of the Surface Studio. It's a...

I continually find that iOS lets me have more focus. In part because everything is full screen and you can’t run many many apps. In part because I only allow one application to give me any notifications of any type on my iPad (Things).

When I’m working I just work on the task in front of me.

I dug much deeper into this on my site this week.

I continually find that iOS lets me have more focus. In part because everything is full screen and you can’t run many many apps.

For me that’s a disadvantage, because if I’m working on a project or doing research, I’m usually switching between a web browser, a pdf reader or epub reader, an outliner, and a text/Markdown editor. On the Mac I usually work with two apps per space, so it’s conceivable that with iOS 12 and an iPad Pro I might be able to replicate my current workflow, but right now I have my doubts as to whether I can currently be as eficient as when I am on my iMac.

I freely admit that some things are more difficult. I have found that the trade offs in a bit of difficultly have meant more work overall.

Today I was rendering videos on the iPad. Even with my slow MacBook Air I could do it in the background. Not with the iPad and yes I wish I could. But the amount of content I’m able to produce words, video, podcast has greatly increased due to the focus I get so…maybe needing to wait is better.

I just got back from another iPad only trip (eight days this time). This time around I had a bit more work to do while I was on the road, mostly reviewing or revising some Word documents. While the iPad version of Word might not have all the features of its desktop counterpart (I know @macsparky often misses the ability to modify styles on the iPad in his work) the ability to track changes and insert comments is very solid.

The other new workflow for me on this trip was using Screens to log in to my new Mac mini back at home. I did this to manage some large files; downloading from one website and uploading to another (the lousy hotel WiFi probably posed a bigger obstacle to doing this than being on an iPad though). The ability to “cheat” on being iPad only by remoting in to a Mac may be what finally gives the the confidence to leave my laptop at home for good.

Thanks for starting this thread and to everyone here for sharing your experiences!! I’ve been “mostly” iPad only since the iPad Air 2. (I realize that’s not “actually” iPad only.) Currently, I have a 2nd Gen 12.9” iPad Pro, which I’ve had since it came out.

The first time I got in an Uber and worked the whole time reviewing deposition transcripts, sending and receiving emails, and browsing the web, I realized there were no longer any limits on how (and where) I could work on solving the problems my clients hire me to solve. The first time I went to trial and had just my iPad carrying every single document in the case, perfectly organized, at my fingertips, and ready to present wirelessly at any moment, I knew I had an edge on everyone else in the courtroom and the admiration of the jury. The first time I sat in front of a client in a conference room while taking notes electronically without having a screen between us, I smiled knowing that technology would now be my servant allowing me to do my job but not hindering with my ability to connect with the people I serve.

IPad is one of the best things that has ever happened to computing. I like using it so much. I’d like to use it—and only it—for absolutely everything, but there are a few areas where I still need to lean on the Mac. (Nerd that I am, I also really like using a desktop-class OS and all the well-grooved tools I’ve been accustomed to for the past 37 years.)

The trouble areas for me come in about five big category buckets.

The only reason I didn’t upgrade to the new iPad Pro is because it is no longer the device itself that is holding things back. The software needs to grow up. I think this is happening, and I’m looking forward to see how some of these things might be addressed in iOS 13. Crossing my fingers.

*** After posting this, I went over to MacStories and discovered that Apple just posted a series of videos on iPad work flows. Check it out. ***

3 Likes
iPad as Laptop Replacement
Musings about my macOS renaissance
What are your biggest barrier(s) to going iPad only or primary
MacSparky January 21, 2019, 12:52am #75

I’m with @ChrisUpchurch on phoning home in a jam. It really isn’t that easy to drive a Mac from an iPad for all tasks but it can get most jobs done in a pinch.

I’ve been in Seattle with @RosemaryOrchard for a few days (PodCon). During that time I’ve been negotiating a very complex contract and use the Word track changes feature with counsel for the other party who is using Word for Windows. There have been zero problems.

I bought a Logitech keyboard for my iPad and what a difference that has made for me at work. In fact, in meetings, I prefer the iPad because the keyboard is so much quieter than the MBP.

I’ve been traveling a bunch lately (on the road 24 days in the past two months). I did not take a laptop with me at all, just my 12.9" iPad Pro.

All of these trips were at least nominally vacations, and for one of them I was genuinely out of contact for the entire ten days. However, another ten-day trip ended up being one of those vacations where you do have to do some work (mainly wrapping up some stuff I didn’t get done before I left). The iPad Pro worked just fine for everything I needed to do. Word for iPad deserves quite a bit of credit here. While I don’t love Word, it is essential to cooperate with some of the people I need to work with and the iPad version is quite capable.

iPadOS 13 should address a couple of the remaining pain points for me (mainly desktop Safari and external storage). I am increasingly convinced that I’ll never by another laptop. It’ll be desktops in my office and at home and the iPad everywhere else.

Same here. As soon as I could have two “windows“ of an app side by side in Notes, suddenly my laptop didn’t seem quite as necessary. I’ll never be able to fully part from macOS for some higher function statistic and graphing work due to my job, but going iPad only for traveling suddenly became reality for 90% of what I could do.

iPadOS 13 should address a couple of the remaining pain points for me (mainly desktop Safari and external storage). I am increasingly convinced that I’ll never by another laptop.

Send your old iMac to me! LOL!

That screen is incredible!