Things you wish Siri could do?

Or add reminders to a single row when I want it to: 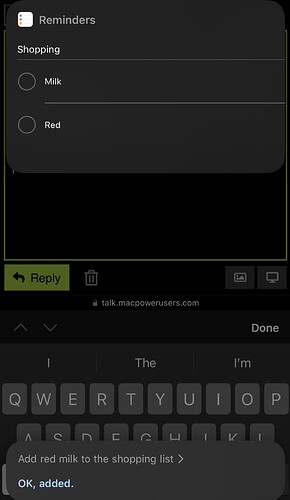 I don’t use Siri, but I probably would if it had advanced enough to be like the ship’s computer like on Star Trek

Later, “hey Siri, where are my keys?”

“John, three minutes ago you said they were on the night stand.”

Here is concept… When you ask Siri a question it currently basically searches the web and comes up with an answer.

Why can’t it also search your reminders and notes and calendar apps also? And I mean without creating complex Apple shortcuts.

Why can’t you ask Siri: what are my important tasks or events or notes etc? … Then get a nice list (without shortcuts).

Re: red milk – are you from the south? I’m from NC and that’s what I grew up calling it, but folks elsewhere don’t use that term.

red milk – are you from the south? I’m from NC and that’s what I grew up calling it

As in whole milk with a red label and cap?
(Had to google that)

I’m from the UK. There are three types of dairy milk commonly available: whole (blue), semi skimmed (green) and skimmed (red) referring to the fat content.

Most people in the uk refer to it as the type rather than colour.

Whatever the thing is you want to add, I would expect the adjective (I.e., the colour in my case) to be included on the same line.

I’ve tried it with other things and it seems to work fine, which makes it more frustrating!

I just wish it had the capability to meaningfully control the device. It doesn’t feel like much of an assistant if you can’t zip through apps and actions without some sort of shortcut. It’s the one thing I’ll give Samsung’s Bixby (who? exactly), it is impressive what it can do with the phone itself from a control perspective.

Both my watch and my phone apparently picked it up. The phone dialed the number, then somehow the watch got the phone to put that dialed call on hold, and call that same number again. That seems like the sort of thing that a virtual assistant might want to check for.

I wish that Siri would remember that I prefer her Irish accent over her Australian accent, and not whimsically / randomly change the accent back to Australian every so often.

My wife is Irish and I am from New Zealand.

An Australian accent is not acceptable!

Undertand that after a few corrections ewe and you are NOT the same!

I’d prefer he default to the sheepy version. (I use the UK British Male voice for my Siri. His recognition of what I really mean is better than the female versions either US or UK)

In general better trainability to what I say and what I really mean as text.

I wish Siri was a little cleverer.

‘Hey Siri, Tell my wife she is beautiful” got the response “Who is she?”

‘Hey Siri, Tell my wife she is beautiful” got the response “Who is she?”

… which is infinitely better than, “Which one is she?”

Open.ai (who invented GPT-3) recently released and open-sourced a speech recognition and translation neural network, which can, for instance, translate K-Pop songs to English. An example commercial for Micro Machines (very fast English) is on their blog linked below. Maybe Apple will incorporate it into Siri.

I’ve been experimenting with this over the last few days, for interview transcription. I’m pleased with the 1x results, but it’s taken about an hour for every few minutes of dialogue on an M1 Max. I haven’t evaluated the quality of the smaller models yet. It also doesn’t do speaker disambiguation yet, you have to split the tracks yourself re-assemble later (whisper outputs timestamps, so you just have to merge and order them with a script.)