Tool for comparing/deciding which product to buy

So today Apple launched two new iPads, and I want one. I don’t know if I need one, but I want one. Of course, I don’t know which.
So, do you guys use any kind of tool or workflow (not necessarily Workflow with a capital W) to decide which and whether to buy in cases like this?
I’ve mostly just used spreadsheets and tried to compare features to amounts, but it never actually works, and I end up just buying on gut feeling, and I feel like the amount of times this has failed is quite large.

I try to avoid impulse purchases. And expensive Apple products until they have been available for a month or two. I prefer letting the eager beavers find the problems that Apple fixes in the first few weeks.

Otherwise, I look at the software I need to use and the minimum technology that is needed to run it with reasonably good performance. That’s the thinking I used when I purchased a $329 iPad (actually $429 when bumped to 128GB) rather than the shiny new 11 in iPad Pro I fell in love with when they were first announced.

The 9.7 does everything I need. It will be cheaper to replace should I destroy it like the iPad Air 2 it replaced. And, if my needs change during its lifetime, it will be easier to justify an early upgrade to another device.

I study the specs, and compare.

As far as these two new models go, they’re different enough (weight, screen size, only one has Smart Connector for keyboard) to make the decision between them fairly easy.

If you are interested in a new iPads someone made a spreadsheet matrix for all current models that you might want to check out: The 10.5-inch iPad Pro and 10.5-inch Pad Airi aren't the same. Here are the ways they are different and which one you should buy. Which storage size should you get for your iPad Air (2019)?

Storage space is a valuable resource on any device, and with no chance of upgrading storage after purchase, you'll want to make sure you get the right amount of internal storage upon purchase of your new iPad Air.

That google sheet works, but I’d have to insert Norwegian prices. I could also make fields for “how much I care about this feature” if I really wanted to. Might play with that later today. 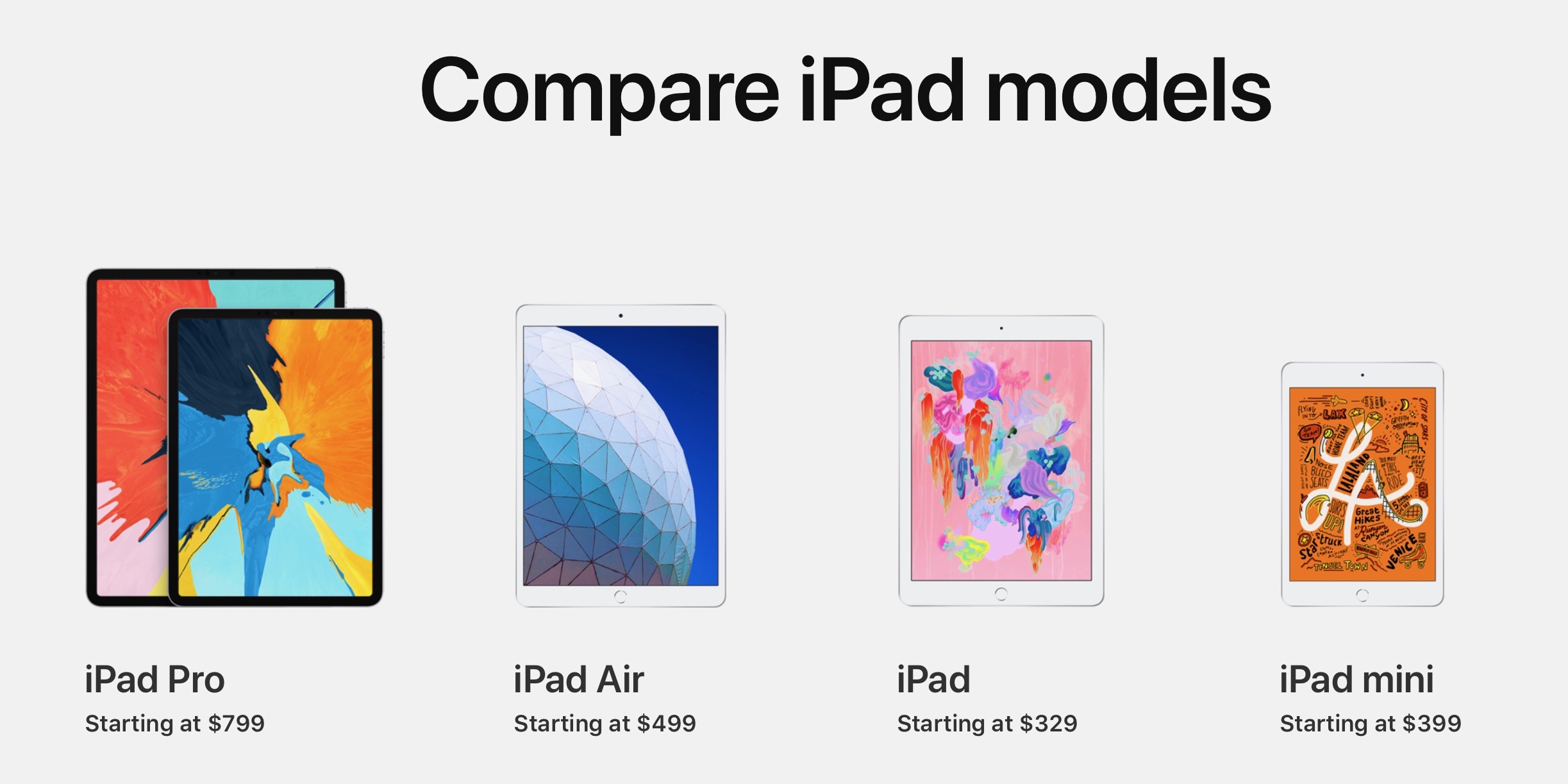 Which iPad should you buy? Here’s how the new iPad Air compares to the rest...

Apple released the new iPad Air and iPad mini today with a variety of improvements including processor updates, Apple Pencil support, and more. Read on for how the latest iPad models compare to the…

I always make my own list/spreadsheet so that I can whittle it down to only the things I really care about. Price doesn’t always go on the list, unless it’s a big difference.
I then make an emotion-led decision to buy the best product.
Then I realise it won’t be released in Thailand for another 2 months.
Then the excitement wears off, and I realise I can go another year with my current devices.

This is why I have an iPhone 6 still, a 9.7" iPad instead of a Pro, a 2nd gen Watch and no desktop Mac (having already gifted my old one to my parents; I do have a nice MBP).