Trying Out OmniFocus for Mac Before Version 3 Release

I want to try OmniFocus on the Mac, but wanted to wait for version 3 to come out first. If I were to start now, would I have to pay for an upgrade, or is there a discount/free upgrade path for those who buy now?

Pretty sure for the OSX version if you buy version 2 now it’s a free upgrade to 3 on release. Sure I read that on their site.

It’s a great piece of software, requires time invested but once you’re in the habit it’s so beneficial.

I moved to things 3 when it came out but have gone back to Omni since as in just more comfortable with it.

If you buy OmniFocus 2 for Mac you’ll receive a free upgrade. Here’s the official word:

On a side note, I’m one of the lucky few who’s using the OmniFocus 3 for Mac beta!

What, no comment on OmniFocus 3 for Mac other than that you’re using it?

I have asked to be on the beta program but have not received an email yet. Either I’m just down in the queue or responded too late. Should I not make it into the beta program, I will be happy working primarily on iOS and doing just basic edits on macOS until the official release.

I responded the first day they had a link to sign up for the iOS Testflight. Like for iOS, they’ve invited the most curated list for the very first wave, they’ll have multiple waves over time. With the first wave, they’ve wanted a small number of people so the most obvious and egregious bugs aren’t getting reported 1,000 times each. Once they’ve gotten a patch out on them, they’ll do the second wave. I was the second wave last time.

While there’s a shorter window of time to release for the Mac version than the iOS version (there were almost exactly two months between the second wave and release, while the first wave of the Mac beta has only just started and release is due before the end of September), I imagine they’ll do it fairly similarly.

They’ve asked for a bit more discretion for the Mac, though I don’t know that there’s a real NDA. I had a better idea who was on the first wave for iOS, but it was power-users with a lot of technical know-how and a good platform last time. I know @RosemaryOrchard was one of the first people in last time and I’d be surprised to find out she’s not in the Mac beta already.

tl;dr don’t discount the likelihood of getting your beta invite (there’s no maximum number of testers imposed by Apple for the Mac test), and be patient (which I’m personally struggling with).

I recommend following Omni Group CEO, Ken Case on Twitter for updates on the OmniFocus 3 for Mac beta. Here’s his latest post:

Lots of great feedback in these first 24 hours of outside testers using OmniFocus 3 for Mac! I think we’re on track to fix the most common showstoppers and be ready to invite 500 more people to help us test—probably late next week.

I’ve been running the Mac beta since Thursday and am one of a small group helping the Omni Group identify issues to be addressed before making the beta available to more testers.

If they gave it to everyone right out of the gates the Omni Group would likely be inundated with bug reports and feedback, which could ultimately slow down the development process.

I’m impressed so far! There are plenty of creative UI touches and the stability has been strong overall (the one crash I found has already been fixed). It’s also a treat to be able to access things like tags, advanced perspectives, and flexible repeats on the Mac!

There’s also the Omni Slack group. I’ve seen some screenshots posted in there so far, and Ken has been active again.

If you’ve not bought OmniFocus 2 and aren’t interested, sign up for the OmniFocus 3 test programme. Test builds of major version releases don’t require a licence.

These first early builds have already seen great progress. As @timstringer says, the app is impressive even with features still in active development. The same power is there, but the interface makes it feel much more friendly to me.

I have downloaded the free trial of OmniFocus, as I figured it was the best way to see if it will meet all of my needs and live up to the hype.

I need to plan my day and see what I have on. Forecast view seems to address that, but I need to see what is on for today grouped by the type of task (e.g. phone calls, letters, e-mails, etc.). I did this in Wunderlist by creating a Project for each, as its Today view groups tasks by project.

These items really aren’t Projects, so I created contexts. Is there a way to tweak the Forecast perspective to sort by Context (or if really necessary, Project)? If not in version 2, is that feature going to be in version 3?

I tried creating a custom Perspective (that’s Pro version, right?) and was able to get it to Group by Context and sort by due date, but could not seem to get it to filter out all those tasks not due today. Is there a workaround here to get tasks grouped by type (identified either as a Context or a Project) and filtered to just Due today?

I need to plan my day and see what I have on. Forecast view seems to address that, but I need to see what is on for today grouped by the type of task (e.g. phone calls, letters, e-mails, etc.). I did this in Wunderlist by creating a Project for each, as its Today view groups tasks by project.

Typically the Forecast is there to show you what’s become available today (deferred to today), due today and your calendar appointments. (Of course it also includes the near future.) With OmniFocus 3 you can choose a tag whose items will also be shown in the Forecast. This sounds like it might help you.

These items really aren’t Projects, so I created contexts. Is there a way to tweak the Forecast perspective to sort by Context (or if really necessary, Project)? If not in version 2, is that feature going to be in version 3?

You’re on the right path here. Those ‘types of tasks’ certainly do sound like contexts, (which are represented as tags in OmniFocus 3). There is not a way to group by context/tag in Forecast, even using the new Forecast tag.

I tried creating a custom Perspective (that’s Pro version, right?) and was able to get it to Group by Context and sort by due date, but could not seem to get it to filter out all those tasks not due today. Is there a workaround here to get tasks grouped by type (identified either as a Context or a Project) and filtered to just Due today?

I think the sort of workflow I might take in your situation is to create a planning perspective that includes available calls, letters and emails, and use that as a palette to choose what needs doing today. Mark those items with your Forecast tag (perhaps today or ⭑) and then you can use Forecast as your working perspective, showing you everything.

If, though, grouping by tag is important, you’ll need to create a custom perspective, which is indeed a Pro feature.

Of course this all relies on OmniFocus 3. In OmniFocus 2, you might opt to use a flag to take the place of the Forecast tag. Though because flagged items won’t appear in the Forecast, you might want to make a custom perspective of available, flagged or due items, grouped by context. Like this: 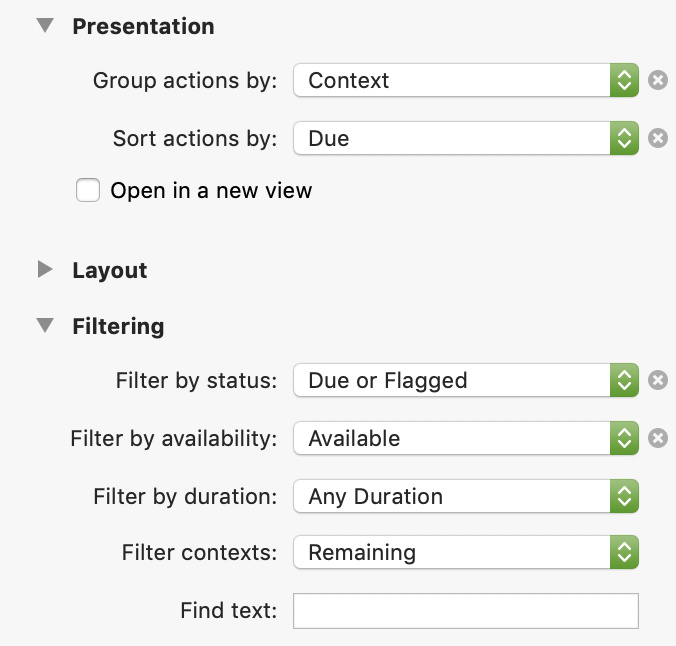 OmniFocus 3 (for Mac) will be out in September so you’ve not got long to wait if you like the sound of its features. Buying OmniFocus 2 now will get you a free upgrade to OmniFocus 3 once it’s available.

Thanks for the awesome response! I did try your settings for the custom perspective, but it still showed a task due tomorrow among the ones due for today. I appreciate your candor on the other issues, and there may not be a way to recreate my workflow in OmniFocus 2/3. I can either modify my workflow or stay with Wunderlist. Still playing around and experimenting.

Ah yes, OmniFocus will show due soon actions in that case. You can redefine what ‘due soon’ means to you in preferences: in the next 24 hours or just ‘Today’ if you prefer.

OmniFocus tends to be quite flexible in letting you make your workflow whatever you want, but definitely leans toward a GTD workflow.

Regardless, I hope you find your optimal workflow.

Dude!! That did the trick! I set “soon” to Today, and now my custom Perspective only shows Today items grouped by Context! Now on to other experiments in workflow!

Is there a way, in version 3, to create a custom perspective that will filter by Tag? If I set a Tag to Home or Work, can I create a corresponding perspective of to-do lists for the home and the office? That would give me one unified system!

There certainly is on iOS, so I would assume (!) that there would be on the Mac version…

They also have a great community at discourse.omnigroup.com

Yep, and all the same options are available in OmniFocus 3 for Mac as well. 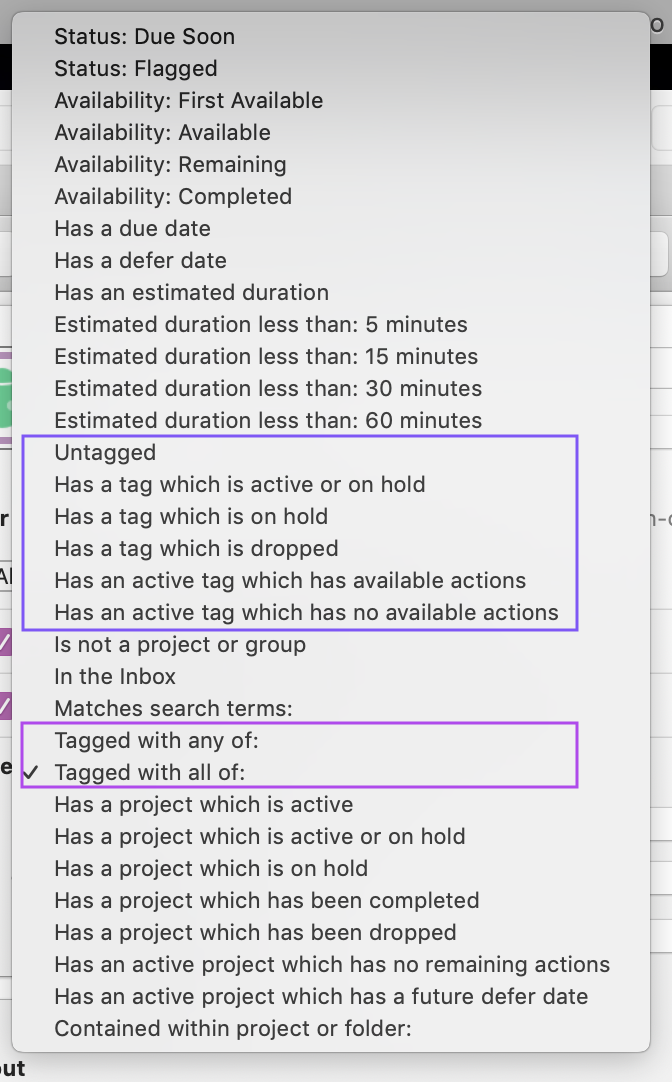 @LawyerSteve Your use case is exactly what I do, too. A set of perspectives for Work and a few for personal. One place and I don’t have to worry about seeing the work stuff if I don’t want to. Sometimes I even put my work tags on hold so I don’t even accidentally see them!

Thanks! Looks like I’m all set! I purchased and downloaded @MacSparky’s video field guide to learn more. However, for some reason, QuickTime 10.4 is not showing the chapter marker button on the toolbar, so I can jump around on the guide. Anyone have an idea as to why this is happening? Googling it didn’t produce an answer.