Upgrade to the iPhone XS?

I have been on the iPhone upgrade program for the last couple years as it is a great deal for anyone who likes to get a new unlocked phone every year or two (it simply splits the cost up over two years but you can choose to upgrade after a year if you want and the only added expense is Apple Care).

This year, however, I am seriously wondering what new features could entice me to upgrade to a new 5.8” model (not interested in a X Plus). I feel like simple speed and camera improvements won’t be enough. The iPhone X is still incredibly fast and has gotten even faster and smoother on iOS 12 (Public beta 10) and I can’t see the dual cameras getting more than a minor update. Apple usually has some new feature up its sleeve to draw ppl to the S phones (Video, Siri, Touch ID, 3D Touch) but I wonder if this year Apple is more focused on getting last year’s skeptics and the mass market onboard with the X in general.

Holding onto the X for a second year means the opportunity to sell or give it away next year and I’m really having trouble figuring out what major benefits the XS might bring. Of course we will all know soon and I’ll update this when Apple inevitably convinces me that it was stupid to ever consider not upgrading but in the mean time I would love to know what people think the XS might bring!

From what little “leaked” information is being provided, there doesn’t appear to be a super-neato-whiz-bang software feature that makes getting an XS (if that’s really the name) more attractive or worth an upgrade. The 9to5 leak shows a gold chassis with a black screen and 3 different sizes of iPhone, but so far not much else is known.

I decided to get the iPhone 8 last year, because I’ve suffered from “early adopter” syndrome in the past (example: getting the original Apple Watch, and feeling like it wasn’t really useful until the Series 3 came out). So I opted to stay away from the X until the following year (this year). So this year I will be getting either an XS because something tremendous is revealed, or I’ll be getting last year’s model X so I can save myself a few bucks but still enjoy an upgraded experience.

Ultimately, We will know for sure on the 12th,

I expect everything to be faster and better, from the processor to the camera to FaceID detection. (Indeed, for iPads with a vertically-facing camera FaceID will need to be able to detect faces when set horizontally, so I expect that to be an upgraded iPhone feature as well.)

So will it be right for you? You tell us in a couple of weeks!

Really looking forward to hearing more about the new lineup. My 6s plus is still going strong but I’m getting the itch to upgrade.

I’m on a iPhone 7 (on the second year of my usual 2-year upgrade cycle). I’ll almost certainly be upgrading to the new iPhone this fall.

Really looking forward to hearing more about the new lineup. My 6s plus is still going strong but I’m getting the itch to upgrade.

Same here, same device too. I bought my then-top-of-the-line model when Apple started selling unlocked versions in December 2015. Love it, would love to try out the model with the largest screen, which would be almost halfway between the current Plus iPhone and the iPad Mini.

If the new large iPhone accepted an iPad Crayon/Pencil-type stylus, I’d get Astropad or Duet for it and never think of using a Wacom tablet on my Mac again!

Same here: I‘m still on an 6s. It has 3D touch which was imo the last innovation that really makes a difference. Everything that came afterwards is only speed, convinience, performance, but nothing that lets me do anything I can’t do on my current phone. Especially if it gets faster with iOS12, as promised.
On the other hand, I‘m kind of tempted by something new. And thinking about going big …

I use my 5.5" 6S Plus so much every day, and I miss my old iPad Mini. Although I am hoping t get a new iPad Pro this year, I am really much more excited about getting an unlocked 6.5" phone to replace it. (Sadly, Apple tends to wait 2-3 months before making available unlocked iPhones - I had to wait until December 2015 to get my 6S Plus.)

3D Touch never much appealed to me as discoverability on the iPhone is hit or miss on a per-app basis, and one needs to remember which apps implement it in which ways. I use it regularly on my Mac, though mostly for dictionary definitions. So if the rumors are right that that bit of tech will be going away in most new iPhones (plausibly in favor of long-press as a substitute), I’d be okay with it.

I use it all the time for cursor movement and if they take that from me I‘ll cry.

Okay, but how would you use the two finger thing on the phone? 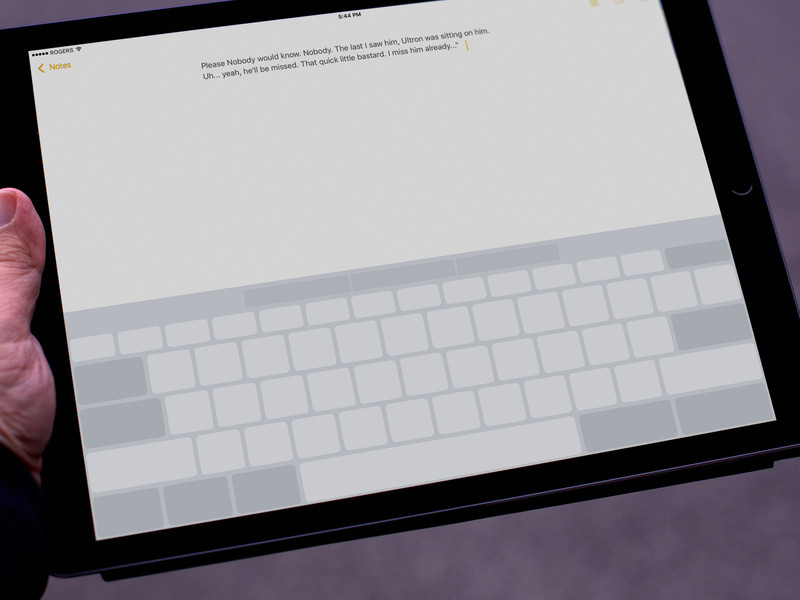 How to use trackpad mode on iPhone and iPad

The keyboard on iPhone and iPad has plenty of cool features and one of the best is "trackpad mode".

Sure, that’s what I’m talking about! But trackpad mode requires 3D touch on the iPhone. Of course they could implement it with a two-finger gesture like on the ipad, but that wouldn’t work with the thumb which most people use to operate their phones.

In iOS 12 trackpad mode can also be triggered with a longpress on the spacebar.

I’m probably going to stick with my 6S for at least another year.

In iOS 12 trackpad mode can also be triggered with a longpress on the spacebar.

I’m not sure I knew that!

Ultimately, 3D Touch is a piece of tech that few knew about, fewer used, had no discoverability (a failure directly attributable to Apple’s own poor UI decisions, since it could have been fixed years ago), was never fully implemented across all the iPhones it sold (it’s still missing from the SE), and due to the larger screen size cannot be implemented on current or future iPads.

So the rumors about its going away on most new iPhone models makes sense. I’m just surprised it wasn’t done away sooner.

While this is true, I’ve discovered this only activates cursor placement, and removes a couple functions that make 3D Touch so powerful: once you move your cursor over a word, a 3D press will highlight the entire word. If you do two of these presses immediately in succession, the entire block of text is highlighted. This is enormously helpful when writing long reply posts

Tapping with another finger and then dragging with the first one allows basic text selection, but it’s true that 3D Touch is somewhat more advanced with paragraph selection and one handed operation.

I would like 3D Touch to stay around and maybe one day (with another technical implementation for the larger surface area?) come to the iPad screen, but we’ll see…

3D/Force Touch on pre-X iPhones use capacitors integrated into the LED backlight above the digitizer, detecting the curvature of the glass on a micro level to determine pressure; a larger screen would bend differently than a smaller screen, making it impossible to use it on bigger screens. A different tech is used on the Watch (electrodes lining the curvature of the screen, combined with multitouch data), which is different from the tech on the Trackpad (sensors placed in the corners to measure pressure), all with different amounts of sensitivity, and tuned to the screen size.

The iPhone X doesn’t use an LED backlight; it instead created 3d Touch using a much more expensive film sensor from what I’ve read.

But word is it’s apparently too expensive, which is a reason behind Apple’s allegedly dropping the iPhone X (as they did with the too-ex-expensive iPhone 5 model) in favor of newer models … without 3D Touch.

And if Apple has indeed decided, as rumors have it, to drop 3D Touch from its high-end iPhones, one should not hold one’s breath to see that technology suddenly appear in iPads.

Interesting.
To me, text selection and processing (context menu etc) is the weakest point on iOS and that wouldn’t get better if they take away 3D touch. Longpress is always a bad and slowing down gesture imo.

The two situations in which I use 3D Touch the most are cursor placement and acting on notifications from the lock screen (like quick replying to a text message). Although a long press could replace 3D Touch many in situations, I think these two features would become a lot slower and less useful if 3D Touch went away. Lock screen actions would probably be the most affected — I find it to be less useful on the iPad already.