Press release content from PR Newswire. The AP news staff was not involved in its creation. 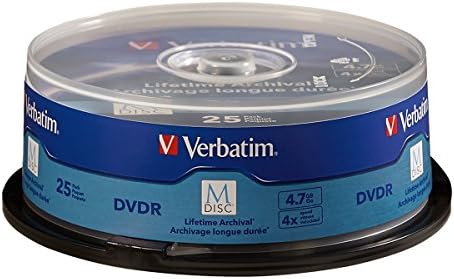 The Verbatim disks are more “conventional” optical disks that store almost 4.7 GB a piece and cost about $2.00. Projected storage lifetime of over 100 years. The drives themselves about $130.

Does anyone use these products to deal with long-term storage? I do not hear much about them when I listen to podcasts or read articles in the popular literature discussing the problem of long-term storage. I am puzzled that they are not more “popular”.

Optical disks “of the day” got overwhelmed as data storage needs increased and created anxiety because there was uncertainly about how long the stored data in the dye layers could be expected to survive. This technology seems to solve much of this. But perhaps people are just soured on DVD or do not believe “marketing hype” or something.

The Sony solution seems expensive and complicated, and probably excessive outside of specific enterprise use-cases.

Lots of media files wouldn’t even fit on a 4.7GB disk and it would just be cumbersome to break everything into such small chunks compared to a big spinning platter with TBs of space. It’s also worth considering if there will be drives that can read these in the long run. Will disk readers even exist in 100 years? Unlikely. It’s already a niche accessory compared to ubiquitous USB/cloud drives.

To me, it seems like a risky bet to put archival data (which presumably is important enough to keep) on a niche storage format. Even if spinning drives don’t last as long, they are cheap and it’s easy to move data to a new drive/medium if they fail or something new/better comes along (assuming the data is backed up). There’s also no cost benefit to optical disks, $200 for 470GB just doesn’t make sense (for most consumer needs).

When you start talking long-term, bit-rot becomes a concern - degradation of media, loss of magnetization, etc. It’s a century-scale problem, but I’m not to worried about it

But many places which deal with significant amounts of data use data replication or offsite electronic backups these days to remove the human element of failure.

I’ve been looking at several SAAS providers in the UK recently at work and many use snapshots to “preserve” data and retain the backups for up to 60 days (some as low as 30 days) anything after that they want paying significant amounts to provide the fallback against the possibility of data becoming corrupted.

We used tape for decades, but it was slow which became a bigger problem as our storage needs grew. The last few years our systems would backup to disk and automatically archive to tape. Eventually tape was replaced with cloud storage.

Gartner estimates that 80% of enterprises will close their data centers by 2025 which will probably help close the book on tape and a lot of other technology.