I’ve been waiting for wait times to shrink for M1 Max Macbooks before ordering and they seem to be stuck at 6-8 weeks since the end of 2021 and not budging. Any news on when this is expected to change? The one I want is with 64GB RAM so not sure if that’s a factor too.

Has anyone seen their orders come in faster than the advertised times?

Why would you do that…? Just order, you won’t get it faster by waiting.

Awesome machine. It’s worth the wait. No chance to pick one up in-store in the UK

32Gb should be enough, but I couldn’t stop myself. No regrets though. > 30 open applications and counting. Runs like a charm

You didn’t by any chance have one of the earlier M1 Macs, did you? I’m still looking for reports from people who jumped on the M1 bandwagon early and then jumped ship again to the newest fastest M1 Pro and M1 Max Apple Silicon. I’m curious to hear from folks who have used both!

Mine finally arrived yesterday, after the first one I ordered on announcement day got “lost” by UPS. I also went whole hog, 64g and 4TB max. I always get the highest powered Mac, and then get to keep it longer. Can’t wait to let it rip; right now loading all my apps and data (decided to start from scratch this time instead of migrate).

I made the jump. Had an M1 MacBook Air and bought a 14" MBP (actually cycled through several 16" and 14" versions until I found the sweet spot for my use). I still use an M1 MBA somewhat often but the 14" MBP is my primary computer.

Quick take: Fresh boot, nothing open, they’re extremely similar. After many apps are open, and/or many tabs in Safari, you really start to see the difference with the increased RAM and processing power.

Quick take: Fresh boot, nothing open, they’re extremely similar. After many apps are open, and/or many tabs in Safari, you really start to see the difference with the increased RAM and processing power.

Excellent report. Thank you! I continue to be amazed at how well the 2020 M1 MacBook Air meets my needs. I still think it is better than any other Mac I’ve ever had. These days, since I’ve retired, even running (non-Adobe) photo processing software, I doubt that I would see much improvement for what I do with one of the newest M1 Pro or M1 Max systems. Who would have thought a MacBook Air could be such a powerhouse?

How’s the battery life comparison? Was thinking about jumping to a 14" from my M1 but decided against it due to prohibitive cost (sunk enough into the M1 already

) and reports of lower battery life on the M1 Pro/Max.

Wow 4TB! What do you think you’ll use that storage for? Even 1TB seems to suit my needs quite well with all the files and photos I have so I was thinking of getting the 2TB to future proof things but 4TB I did not even consider!

And congrats to add!

My daily driver during the pandemic was an M1 Mac Mini 16Gb. I can’t fault it in any way. It is a great little machine. I have tons of applications running in parallel and it stays snappy. Did everything my trashcan Mac Pro and 16" Intel MBP did before and more with remarkable ease.

The Mac Pro is now happily humming at MacStadium. Probably has a few more years in it. The MBP though was another story. The M1 Mini caused me to really unlike my hot and noisy 16" Intel MBP. To the extent that I just did not use it anymore. So when the new MBP came out, I was intrigued about replacing it a.s.a.p.

I think the M1 Max 64Gb is an unfair comparison to the M1 Mini in many ways. As @Jezmund_Berserker said in normal use they are quite similar, but you know you’ve got an engine with a lot of headroom under the hood.

All I can say is the M1 Mini is currently driving 3 4K screens, 10Gb network to a Synology NAS and an OWC Express Thunderbolt M.2 SSD raid and many other peripherals and it’s doing it with ease. The Intel MBP would thermo throttle and panic regularly in this setup, despite running on a SVALT cooling dock.

Soon I will rebuild my setup and make the MBP the core machine. Will do an update then… I’ve used it standalone only so far…

I have a career’s worth of files, and my 2 TB Mac was
filled up. Plus I was doing video editing on my Intel Mac Mini, which I will now be able to do on this machine. The Mini will act strictly as a media server plus I have to move Parallels over to run my few Windows apps.

I did the same. Moving from Intel to M1 was a good excuse to rebuild from scratch, using the right versions of apps.

It took all weekend, but I finally got everything set up to my liking. I really like the LG 5K display, and my old Samsung is now the left screen with my calendar and comms. The only thing I’m not happy with is the SD card reader. It’s very slow, even compared to a cheapo USB 2 reader I have. 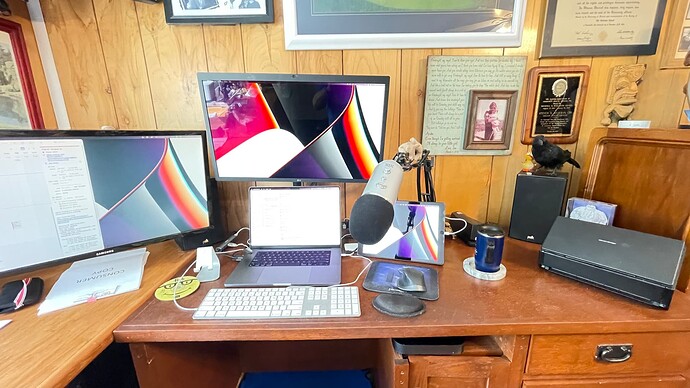 Another MPU recommendation, many years ago. It’s my 3rd one!