I downloaded the iOS 16 public beta a couple weeks ago. It’s been absolutely fine as a daily driver which is good, because I normally tempt fate and lose by downloading an unstable mess too early.

As I looked through my subscription costs this week the Carrot Weather app came into my sites. I was on the $15 CAD per year plan and while that isn’t exactly going to ruin my retirement plan I figured a look at the new iOS 16 app was in order.

I have to say, it’s a bit improvement on previous versions of the stock app. I’ve been using it for a few days now and I really like it. You can now view several data points by hour, the biggest omission from past years in my opinion. Unlike Carrot you do have to toggle between each data point (e.g. humidity, temp, wind) which is a little cumbersome, but not a deal breaker. I also started receiving alerts on my Apple Watch like “rain starting in 22 mins, lasting for 28 mins”. I live in Canada and it was surprisingly accurate last night, predicting a couple of rain showers within a few minutes of its set times. It also seems to bump the radar view up the screen to make it more prominent while there is precipitation – pretty cool.

I also like how the stock widget a) updates much more frequently and b) changes views if there is pertinent information (e.g. to rain by hour if its raining outside).

The only major lagging I currently see (for my use) with stock weather is the watch complication. It’s a minor thing but I want to see Temp AND Condition, not one or the other.

Other than that, I think this iOS 16 Weather app is the first time the stock weather app gives me the detail I like.

An article on the changes: 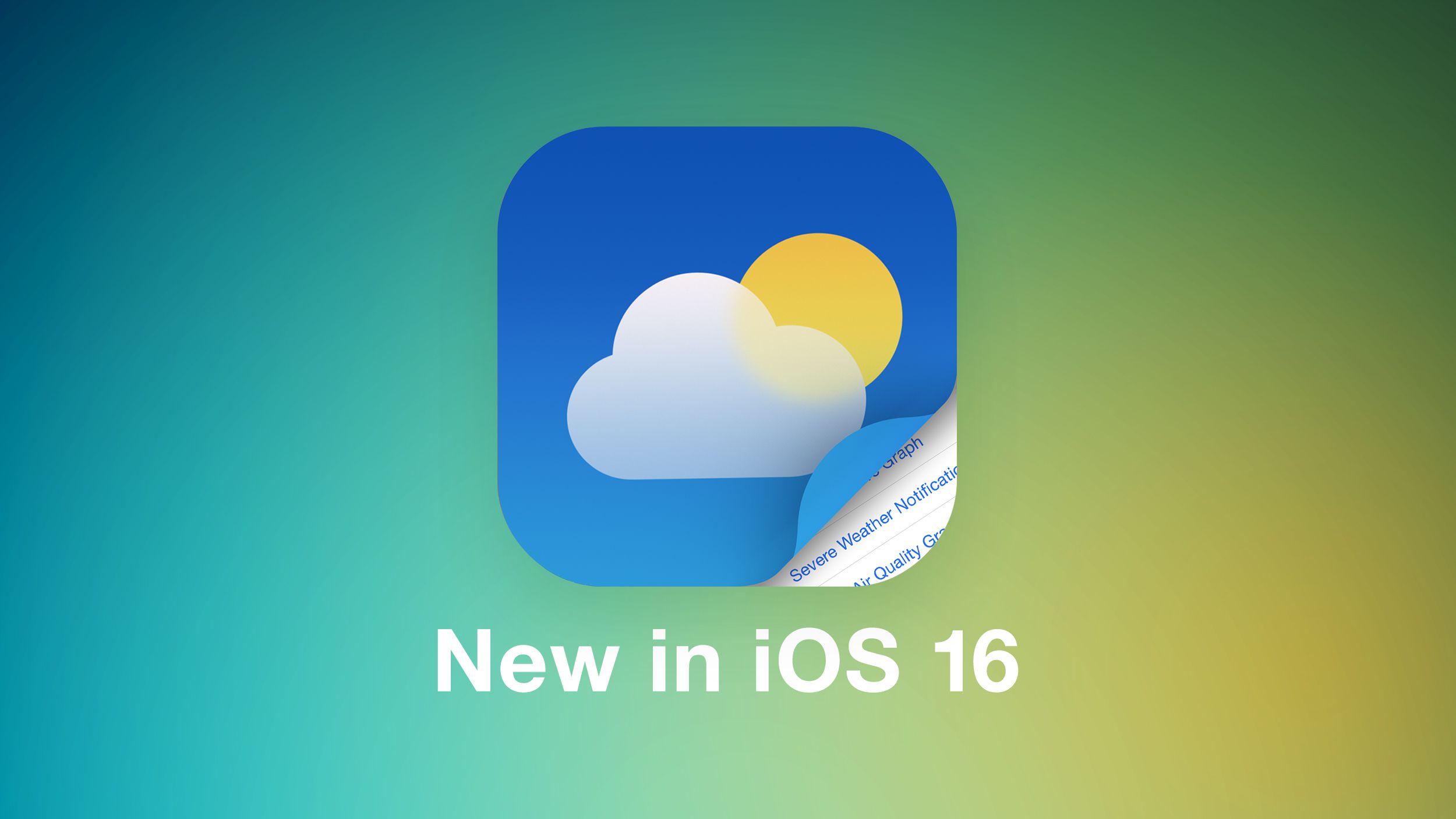 Everything New in the iOS 16 Weather App

Apple in iOS 16 made some notable changes to the Weather app, adding new types of notifications and increasing the information you can see about...

It really does sound like an impressive update. I’m keeping CARROT Weather for now but this will likely become my second opinion app.

I’ve been happy with Snowflake weather on my iPhone. It’s by Bjango, the guys behind iStat Menus. I pay a modest subscription fee each year because good weather data is not free.

iOS 16’s Weather app had better be good since we’re losing Dark Sky in exchange for it.

I was going to say similar, Apple bought Dark Sky didn’t they so darn right their weather app should improve

I’m keeping CARROT Weather for now but this will likely become my second opinion app.

I am liking the new Weather app in iOS 16. In fact, I got rid of all my other weather apps. I used carrot weather for a while, but could not get past the snarky comments. Don’t need that. I told everyone who would listen not to use that app, and now that the new built-in weather app is here, they won’t have to.

One feature of Carrot that I do not see in Weather is the ability to pull data from a personal weather station.

And that will keep me using Carrot.

I have turned off the snark.

I am liking the new Weather app in iOS 16.

I think it is a good app but I miss the super accurate rain warnings that DarkSky offered. These are inaccurate that I turned off notifications.

A Problem I encounter with the iOS Weather App, but also with a lot of competition apps, remains the inconsistency of the presented data.
For example, I have often discrepancy’s between the weather at my local position, and the weather displayed for my (small!) town, that I have set as a favorite.
Those are normally small differences, but they are there, and as both sets of data are founded onto the same weather station, there shouldn´t be any differences at all.
An other example, on Friday I get a forecast of 90% Chance of Rain, if I look at the forecast for the next couple of days. At the same time, the Rainforecast further down on that page says, that there is no precipitation expected for the next 10 Days, and if I click onto that, it shows me 4mm of Rain on Friday.

I run a couple of weather apps on my systems, and I observe similar discrepancy on all of them for my areas.
It is nice, to have a colorful weather app, with a lot of informations, but it would be even nicer, if those information are more reliable than in the current state.

I’ve experienced this. The icon for the day shows a rain cloud and precipitation, but the POP is 10%. Conversely, there’s days where the POP is 85% and it shows an icon of a sun.

Plus one thing I’ve learned is that weather can be extremely variable throughout a region. Like, it could be raining 4 miles away but not where I live.

Finally – while I do use Carrot (at present), it’s because I like seeing the condition AND the temp in the same complication. I also like the layout of checking weather on my watch in Carrot where I can see multiple data points on one screen and with a little scrolling. With stock weather, you have to toggle between the stupid dial screens for different data points, and in iOS 16 it would either take forever to load or just stay blank.

But then the Carrot complication is limited to how often it can update so usually between when I tap the complication and when it “refreshes”, the temp has changed drastically.

I’ve yet to encounter a perfect system but I think mediocre bones in the data collection/weather systems are most at fault.

Another reason I’ll be staying with Carrot … 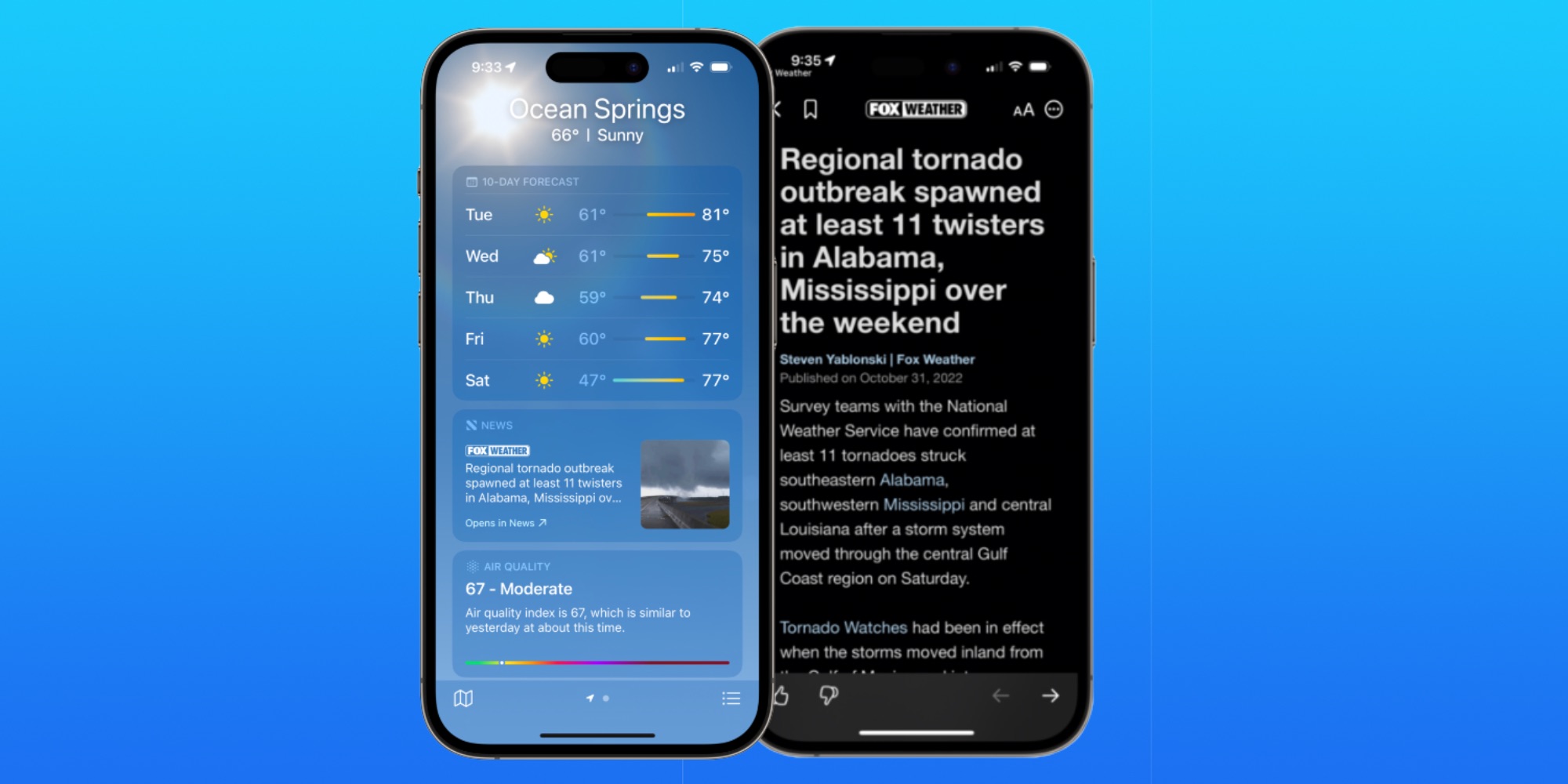 The next time you check the forecast in Apple’s Weather app, you might be greeted with a bit of news. Apple has added News integration for regional weather stories to the Weather app in the beta release of iOS 16.2. Weather × News For example, users...

When I go to my weather app, I want, you know, the weather.

Not some news story taking up a large chunk of the screen real estate.

I know where to find news when I want it.

Maybe this is just an old guy with selective memory. But once upon a time Apple could be counted on to respect its customers.

Another advantage of Carrot is Live Activities. I am using both apps regularly, and I wonder if Apple’s Weather app has them too, but I opened Carrot first this morning. 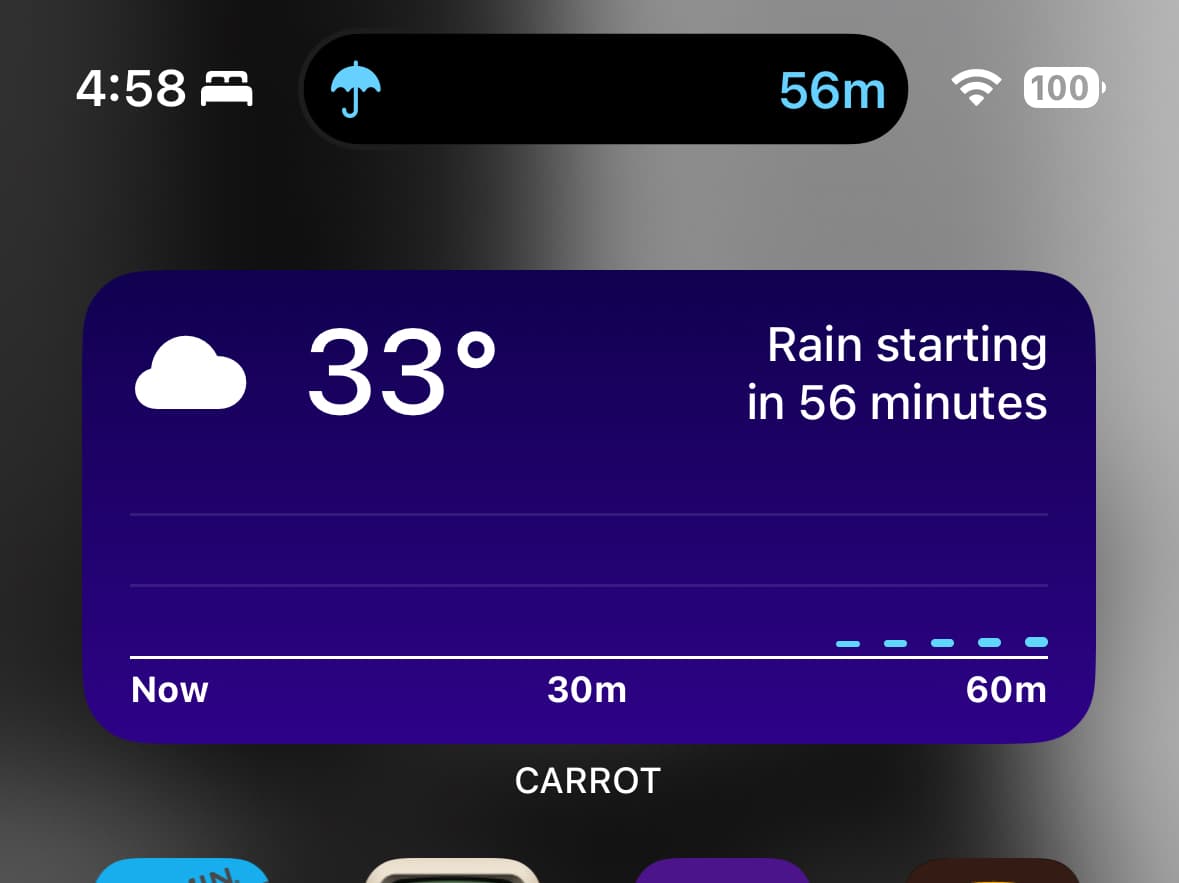 Neat. I haven’t seen any live activities from the stock Weather app yet.

Carrot’s developer (for those who don’t use it) is always using Apple’s new features right away. I really like the new Apple Weather app, but I can’t tear myself away from Carrot.

For sure. Carrot is still a way better app. I have the $5/year tier (might be a legacy tier at this point.)

Even though only a few apps have supported them so far, Live Activities and the Dynamic Island are proving to save time and avoid distraction, while feeling good to look at and use. Just what we want from iPhones!