I’m considering building a computer soon for basic NAS functions and some docker containers to ease my poor little Raspberry Pi but I’m not really thrilled with many of the mATX cases i’ve found online. I would like to have something that looks nice on a desk but many of the cases I’ve seen lean hard into the RGB/Gamer glass builds that frankly don’t appeal to my design tastes. Now I could just get some Fractal Design case and tuck the PC away somewhere, but if I’m investing the money in a PC, I’d like to use it for some desktop work/light gaming (I’m a college student so space isn’t really something I have either). I thought the MPU audience would share some of my feelings about what a nice computer looks like so I thought It’d be worth it to see if anyone had any suggestions…

The Hyte Revolt 3 doesn’t look too bad but it’s ITX and I’d like more than just one PCIe x16 slot. I also don’t hate the Jonsbo D30 assuming it has an extra side panel that isn’t glass.

What do you see as the benefits of building a DIY computer instead?

I built my own PCs from the mid 80’s through the 90’s, at which point I decided it just wasn’t worth my time or effort. Frankly, if you want a sensible computer just buy a business (not consumer) PC from HP or Dell. No flash and simple. I used one for several years as a server as well until I went 100% Apple.

I would’ve suggested Jonsbo or maybe CoolerMaster with RGB ripped out. Have you seen Sliger cases?

Sliger Designs is a manufacturing company based in the United States specializing in computer cases and systems.

You might also find an internally modded old Mac on eBay or be up for doing it yourself.

I have not seen those they look great! I would be open to modding an older Mac. I’ve seen some 2012 Mac Pro cases on ebay, but I would like to use USB 3.0 if possible. Looks like someone over on MacRumors made a PCB for just that. It might be more trouble than it’s worth but super interesting…

I’ve looked into getting a Synology/QNAP and they seem excellent. Their proprietary software certainly seems leagues better than the OSS offerings in terms of UI and usability. My NAS needs are not too intense, just basic file storage and time machine backups. I do really enjoy the process of figuring out what software to use and configuring it on my devices. In an ideal world I would just have ARM devices running everything. There are a few Windows/Linux x86 applications I have to use for my Computer Engineering classes, so having a semi beefy rig to remote into is really helpful and I’m not sure the Synology comes specced with a CPU that could meet my needs.

Ventura may be my saving grace here as Apple is letting you use rosetta in ARM linux vms. Hopefully UTM gets updated to support it and my 14" M1 Pro can run the software without too many issues.

Right now I have an old HP pre-built desktop at my parent’s house that I can tunnel into with wireguard. I love the idea of running everything off of an ARM machine like my Raspberry Pi. It could be a great option for me to get a used M1 Mac Mini after it gets updated to the M2. I could maybe use a thunderbolt enclosure for time machine and just advertise that on my network with Bonjour. Out of curiosity, which Mac are you using as your server?

PCs from the mid 80’s through the 90’s, at which point I decided it just wasn’t worth my time or effort.

You stopped about 15 years before the hobby exploded.

It’s a creative/expressive/quality thing now, not a way to avoid markup from integrators. Check out PCPartsPicker for builds and shopping list configurations sometime.

I would recommend an off-lease Dell.
I’m happy with my OptiPlex 7040 SFF. If I had to do it over again, I would have gotten a larger 7040 for the larger power supply to run a graphics card to play with CUDA.

You could easily run TrueNAS (free) in QEMU (a virtual machine manager), plus have the desktop to play with. There are probably docker images available too.

I have a Dell T320 that I did just that on. It has 8x 3T drives in a zfs pool. Unfortunately, it’s a couple-hundred+ watt heater and noisy, so just sitting idle now.

I think a Synology would be boring and underpowered for what you want to do. It’s more of a “walled-garden” appliance. I have a 918+ that does its job. It can run dockers, but starts to strain when running e.g. Nextcloud.

If you really want to play, check out some of the single board computers like this Zima Board (x86, $120+) or this Khadas Edge Pro2 (8 core Arm, $199+) (looks super
cool). Links are to TechHut videos. These would run circles around an anemic Synology, especially the Khadas. To be fair, when you buy a Synology, you’re buying their “appliance-ness.” Ongoing software updates, built in apps (which I don’t use), etc.

Thanks for the insight, that confirms some of my initial fears about Synology. They’re obviously great at what they do, but not sure that’s what I’m looking for.

I was actually planning on running proxmox on the bare metal and using PCI passthrough for my GPU + the ability to map different PCI devices to specific vms. I was thinking TrueNAS for the zfs support so good to know someone else is running it in a similar configuration to what I’m thinking. I would like to avoid the multi hundred watt heater if I can… I have an HP Compaq 6200 Pro SFF set up for my Computer Engineering so very similar to the optiplex if I’m not mistaken.

The Khadas board looks really cool! I’ll definitely have to look into that more. This source has its idle power consumption at 2.9W

This source has its idle power consumption at 2.9W

Yeah, performance/power on Arm is ridiculous. Why did Apple wait so long?

Just had another thought: if you’re more about the software than hardware, you could get a Linode account and experiment with several Linux distros, running NextCloud, etc. starting at, I think, $5/mo.
And it would take up zero room.
TechHut has promotional links on the videos I posted above.

It’s a creative/expressive/quality thing now, not a way to avoid markup from integrators.

I just want something that works, these days. I’ve always hidden my computers (except for the iMacs) on the floor where they are out of sight and sound and hopefully out of mind. IMHO, computers with flashing lights went out of style in the 1970’s. 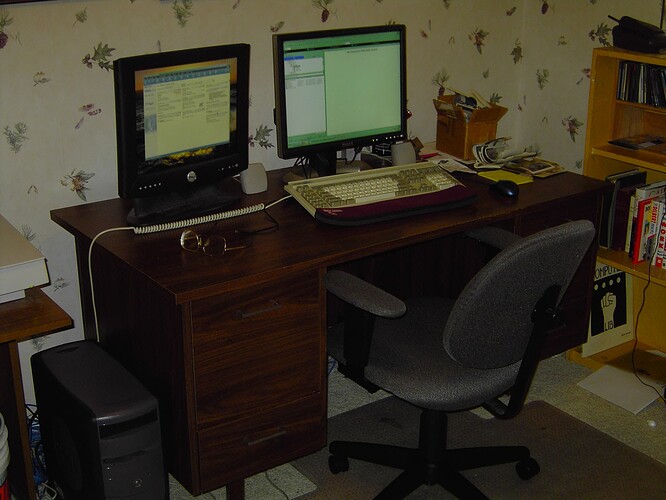 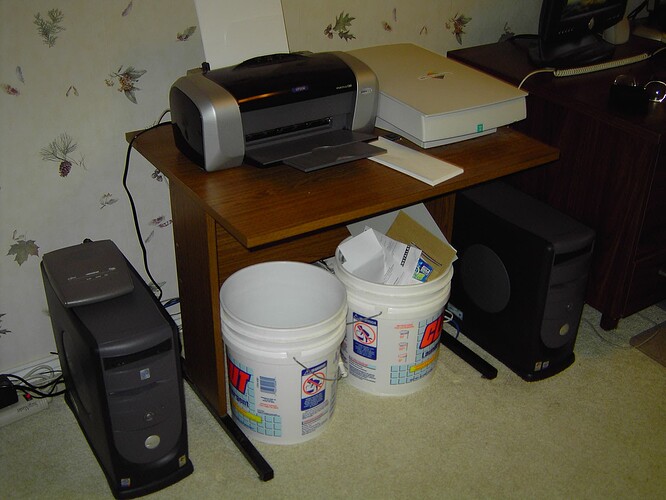 The Dell on the left is the server (at that time) and the one on the right my “desktop” PC. The server acts as the Internet gateway (dual Ethernet cards) to that DSL modem. Unchanged since then is my Northgate Keyboard.

Personally, I dig the Sama IM01 mATX case. It’s minimal and well-built.
It has a few unique features like mounting brackets for 2.5"/3.5" HDDs and Sata SSDs and could even fit water coolers. I recommend you invest in a quality SFX power supply (like the Corsair SF750) with removable cables or you will eventually run into space issues with such small cases.

As we just had an other thread about the second live of an old Mac mini, there are a couple of projects you can find on the Internet, to mod an old Mac mini Case with a modern inlay.