For work, I have to use a Windows laptop SHAME SHAME SHAME I know a few on the forum have the same challenges in their working life.

At home I have limited space for working in and have tried 2 keyboards with a reduced footprint. I much prefer an actual keyboard rather than using the last top one.

The Perixx Periboard-426 PERIBOARD-426 - Wired Mini Keyboard 70% Quiet Keys – Perixx UK has perfect key placement, but the quality is nowhere near where I’d like it to be with Shift not always registering when I’m typing.

Does anyone have recommendation for similar sized windows keyboards which have decent key placement, including inverted T shaped arrow keys which are set apart? Ideally it also wouldn’t have a number pad overlaid on the keyboard.

Curious if you’ve considered one of the keyboards with multiple radios in it, so you can use one keyboard on two machines, and just switch with the push of a button. Logitech makes several. Works really well for me

Another vote for single keyboard with multiple connections, have a client (Windows) laptop with a German keyboard and a MacBook Pro - using a Logi MX Mechanical with both as it connects to 3 devices.

+1 for Logitech MX series. Either the normal all mechanical one. Multiple radios and both Windows and Mac keyboard layouts for easy reference.

I’ve used one in the past (One of the Logi ones) which was Solar Powered. I then moved to a Logi K380, but I hated the keys.

I hadn’t seen the Logitech Keys Mini before. It’s more than I’d like to pay, but it may be the one. What are they like on batteries. I just moved away from the Magic Trackpad 1 to the 2 because I was sick of changing batteries every few weeks.

not got a mini, but the full size keys and mechanical can go for a couple of months or more, depending on what you do with backlighting.

Does Windows work the same as macOS, where Fn+up arrow = Page Up, Fn+down arrow=Page Down, Fn+Backspace=Del? If so, you could try that, and if it works, pop off the keycaps if they bother you.

I have a Drop CTRL High Profile (37cm long), which I like very much. It is TKL (ten-key less), so smaller than a full keyboard, but still has the separate arrow cluster (one of the reasons I picked it over the Drop ALT) (32cm long). If you want to go all-in and learn a new layout, I’ve heard good things about the Preonic (23cm long). It’s ortholinear, rather than the staggered layout of a regular keyboard.

Many more options on the Mechanical Keyboards site.

I’ve heard good things about Kailh Choc switches. They are low profile and lead to compact designs, such as this Hexgears, so googling “kailh choc keyboards” should turn up a lot of choices.

Finally, if you want to save a LOT of room, there’s this BBQ20 keyboard (8cm long), with backlight and a builtin optical trackpad 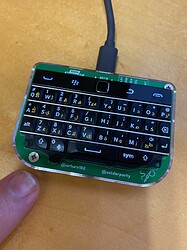 Next to my CTRL for scale. 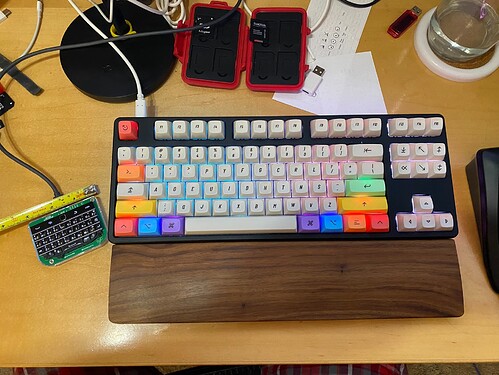 For work, I have to use a Windows laptop

I just moved away from the Magic Trackpad 1 to the 2 because I was sick of changing batteries every few weeks.

I’m still using my MT1, batteries last a couple of months for me.

I tried using one keyboard for both my Mac and my Windows machines, but I quickly tired of needing to change back and forth (and forgetting to do so!). So now I use a Keycrhon K8 Pro with my Mac and a Satechi Compact Keyboard with the Windows machine. Both are Bluetooth capable, but I use them wired. And as noted above, I use a Magic Trackpad with the Mac and a Logitech MX Master 3 with Windows.

) laptop and my M1 Mac mini. I use the Logitech MX Master also and both work with…both.

I tried a sculpt about 5 years ago and ironically it made my wrists ache.

Then I pull my recommendation.

The Keychron C1 is a wired keyboard if you wanted a wired one and fancied a mechanical. I’ve a K8 ISO layout which is the same size and Bluetooth (though can be used wired as well).

Same here, though I’ve switched back to the latest apple magic keyboard (with the fingerprint sensor) for day to day use, and I swap back to the sculpt for serious typing.