After not being able to use OWC’s upgrade kit (kernel panics), and trying a Feather M13 (crashes on boot/wake, and during use), I finally have found a solution that works: 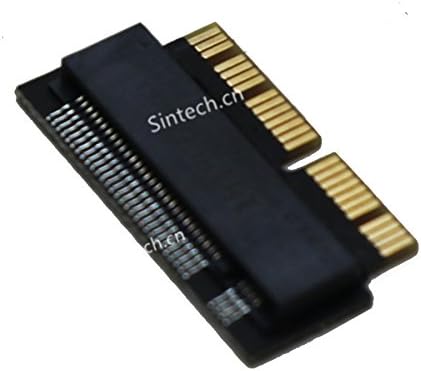 Thanks @Lars for mentioning the Sintech adapter. I read Sintech’s info, and they had a list of SSDs that worked, and SSDs that might cause problems. I went with a safe bet.

The WD drive isn’t the speediest on random reads, but I haven’t noticed any difference in performance from the original SSD. FYI, Feather’s speed claims are faster than my iMac Pro, so here’s a grain of salt •

I’ve had the WD and Sintech installed for over a week now without anything unusual happening, no kernel panics, no crashes.

Unless specified, values are megabytes per second (MB/s)

Great discovery! I was already planning on buying the Feather M13 but I’m afraid it’ll have the same issue with you. Do you think your setup of Sintech + WD Black SN750 will work for my iMac 27" 2019?

I have no idea. It was such a trial and error process to find the combination that worked for mine that I would be afraid to speculate. Especially since an iMac upgrade is much more involved. Maybe start a new thread and ask people what is known to work.

I will thanks a lot John! Have you tried contacting Fledging for the wake/sleep issue? Maybe they have a fix?

Yes. Their workaround was to disable parts of the sleep/wake functionality. After trying that, I still had crashes, sometimes when working on my laptop (using Keynote, etc.). I returned it to Amazon for a refund.

@nemoryoliver - we have replaced original HDDs and SSDs in several laptops but only old ones that are out of warranty. We typically consult OWC and iFixit for parts and instructions for doing these replacements.
For your 2019 iMac, since it’s under warranty, I’d suggest finding an Apple certified repair / reseller who will do this for you, and will have suggestions about what parts to use.

Hi
I saw this question and so joined the site. I use the 2015 MBP and have recently changed the drive from a 128gb Apple drive to the WD SN750 500GB using the Sintech adaptor and using MacOS Mojave. Its not the first time i have done this and the last time i used the Samsung 970 Evo and MacOS High Sierra which has been tried and tested. So far with the SN750 I have had absolutely no issues at all. My main reason for upgrade was space so the speed, read and write issues were not a concern and to be honest just for the boot up speed there is not a dramatic difference compared to the Apple stock drive. Again, no running issues so far and the system has been up and running using DJ software and anylizing hundreds of music files and without any problems. If you are considering the purchase of the SN750 for your Mac then from experience I can say that the drive most certainly is compatible via the adaptor and capable to perform whatever you need to do.

Steven here, I’m one of the founders of Fledging. This is an incredibly late message, so you have my apologies on that. We only just recently found this thread, but wanted to go ahead and reply.

I know first-hand the frustration of system crashes. People have enough stress in their lives, and we’re committed to helping reduce that – not add to it. We’re constantly reworking our products to address issues and decrease friction, and feedback (good and bad) from our users are a critical part of that. So before I dive into the tech side of things, I wanted to say thank you for posting about the issues you experienced.

Performance-wise, I’ll be direct. The speeds you measured sound like you ended up with one of our standard models. That’s a heck of a mix-up, so I’ll checking with our Amazon team to see what happened there. As many of you likely know, the majority of Macs have a performance bottleneck at 1500MB/s, with certain models of MBP and iMac not having the bottleneck. Our standard line is aimed at these bottlenecked drives, thus the 1400-1500 read. Our Turbo drives on a non-bottlenecked machine, such as the MBP 2015, should experience much better speeds. No claim I can make will mean as much as testing it yourself. Therefore I’d love to ship you a Turbo drive to test against your current Sintech + WD configuration.

Fledging uses a similar adapter solution detailed above, however the adapters on the market tend to be several generations behind what we are working with due to our partnership with the primary manufacturer. We also provide a comprehensive warranty on the unit and full support for any issues that arise when upgrading your Macs.

The crashing issue you described was a major problem we ran into. We’ve tracked it down to a manufacturer defect in our adapter solution that, combined with an Apple update that increased the power draw of the SSD, led to kernel panics and reliability issues exactly as you described. We’ve since corrected the issue and implemented much, much more rigorous quality assurance on our units before they get shipped out.

For anyone affected by this issue, or similar drive health complaints, we provide full technical support, no-cost replacements of defective or DoA units, and will work with you to make things right. Just shoot us a message at contact@fledging.net and we’re there to help.

The crashing issue you described was a major problem we ran into. We’ve tracked it down to a manufacturer defect in our adapter solution that, combined with an Apple update that increased the power draw of the SSD, led to kernel panics and reliability issues exactly as you described

These issues must be a nightmare to track down.

Therefore I’d love to ship you a Turbo drive to test against your current Sintech + WD configuration.

Okay, I’ll give it a try. You can DM me for address info.

A couple of years ago i bought the early 2015 13” macbook pro base model. It came with 128gb storage. Of course this wasnt enough for me. At black friday 2019 i saw a good deal on the WD Black SN750 1TB. I was thinking about the ssd upgrade for a while and read a macrumors forum about using nvme ssds multiple times. I decided to buy it from Amazon with an adapter from Sintech as recommended. I swapped out the ssd. Everything fitted and worked fine. The installation went flawless , in general the system felt slightly faster. The write speed doubled. But then there are the kernel panics. Currently, april 5th, I am running the latest OS (10.15.4) with the latest bootrom (190.0.0.0). And there are still kernel panics. They occur when the computer goes to sleep. So when you open up your macbook it has to reboot or it already has. And I didnt want to fully disable hibernation. I tried disabling “put ssd in sleep when possible” but this didnt work out either. This is why im going back to my old 128gb ssd. I dont know if im the only one with this kind of errors and i havent found a solution to the problem. If there is a solution that i am not aware of it i’d love to hear it. I hope that i might help someone else by sharing my experiences.

Welcome!
Maybe the simplest solution would be to disable hibernation.
Is there a reason you don’t want too?

Hi!
Thanks for replying,
Disabling hibernation is something i dont want because it will drain a lot of battery.

It looks like the difference is only 0.5W between Sleep and Off. That’s a small difference considering the 75W battery (when new). You can turn off things like checking for email when sleeping, etc.
Have you tried disabling hibernation?

So i have tried it and still no luck. In a night it lost roughly 25% of battery and still crashed. I used: sudo pmset -a hibernatemode 0

Hello,
I am having the same issue as Menkveld.

Using both adapter exhibits the same behavior with sleep/hibernate - opening the lid will either restarted the laptop, black screen to restart, or crashed message.

I have read so many post and articles stating these 2 combination will work and I thought I was the only one experiencing this. Even tried disabling hibernation and it does not work.

I hope there is a solution to this.