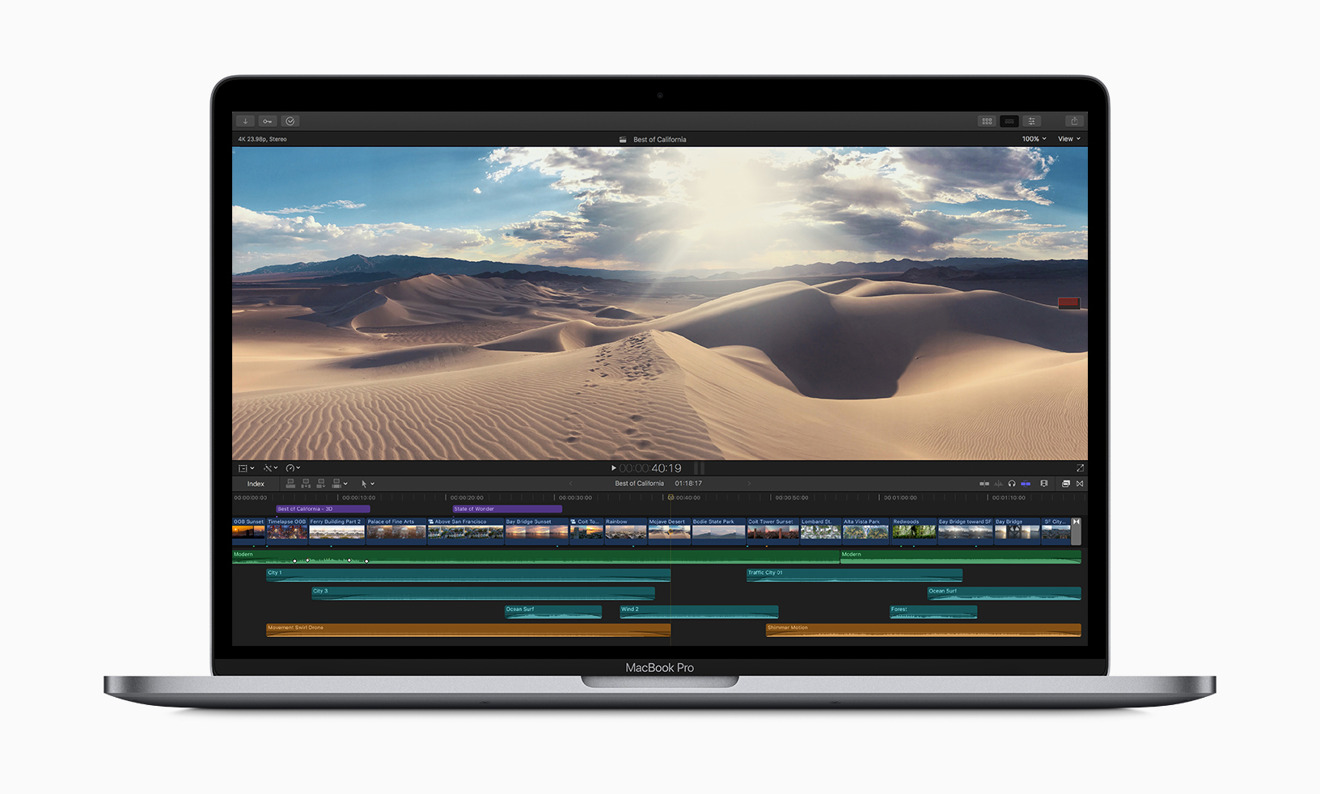 Apple has announced a new crop of MacBook Pro models with Intel's newest 8th and 9th generation Core processors and is addressing concerns with its ultra slim butterfly keyboards with new enhancements to substantially reduce issues users may...

Hope the keyboard is better for typing.

Do I detect a touch of cynicism? I, for one, believe Apple has fixed the problem this time.

And if there are no more keyboard problems in the next 12 - 18 months I might stop warning people about MacBooks.

I highly doubt that they fixed the issue as a huge refresh should be coming come 2020.

I like these every day processor updates, and the change to the keyboard mechanism material sounds promising.

I think these spec bumps would qualify as a huge refresh.
They are essentially portable higher-end iMacs.

True but if your concerned about the keyboard I wouldn’t call this a end all be all fix. That said love how tricked out they can be.

I agree, I wouldn’t think of buying a MacBook these days.

I was going for subtle sarcasm. Guess I overdid the subtle

But 8 Cores! That is so awesome I think I can ignore the keyboard problem. Ha ha…

Except for the thermal problem. I have a six-core right now, and it downclocks as soon as it gets even a tiny bit hot. It’s still fast as all hells, but not as fast as a desktop would be.

I highly doubt that they fixed the issue as a huge refresh should be coming come 2020.

Well, according to several sources (John Gruber, The Verge, Rene Ritchie and so on), Apple went on the record to tell them that they have changed some of the materials being used for the butterfly keyboard mechanism. Still, I would agree that they probably have not solved the issues entirely:

Even the new models are eligible for the Keyboard Service Program. Why should they be eligible in this program, if they have no potential issues? But at least they finally have acknowledged the issues.

I own a 13inch Macbook Pro Late 2016 (one of the first models of the new keyboard stuff and so on). So far, I have not experienced keyboard issues and also no display issues (https://www.apple.com/support/13-inch-macbook-pro-display-backlight-service/). But my model is prone to eventually suffer from both of those issues. With those two programs in place, I feel comfortable to stick to my Macbook Pro, when AppleCare will run out in the fall. I am very pleased with my Macbook Pro. It works for me. But I would not have liked to sit on a time bomb in the long run, when AppleCare runs out. As far as I am concerned, I am fine with Apple’s long overdue recent reaction to the Macbook Pro’s issues.

I think that Apple did what they could for the time being:

Like you said, for sure there will be a much improved model in 2020. But if somebody needs a new Macbook Pro now, I still think that you have nothing to lose: it is fine to buy the Macbook Pro. Like I said: no issues so far on my end.

Yeah I think for me it was just the case that I’m in dire need of a new computer as I’ve used the same one since 2010. I think I’ll buy the newly released MBP. If the redesign in 2020 entices me I’ll trade it in I suppose.

Yeah I think for me it was just the case that I’m in dire need of a new computer as I’ve used the same one since 2010.

That sounds like a plan. Just don’t blame me, if you have issues after buying the Macbook

But as I said: mine is a late 2016 model with no issues so far. And it has the “bad” display and the “bad” keyboard. And to me, it is still a great machine (with no keyboard and display issues so far).

Excellent Twitter thread from iFixit about the new Macbook keyboards:

I spent the last few days getting to know the materials Apple used in their MacBook keyboard. Because Apple doesn’t design these keyboards to be repaired, our analysis was destructive. A 2019 MacBook Pro died to bring you this information. /thread pic.twitter.com/6jkv90nLjB

I had no idea they were using crappy snap discs (shades of Atari controllers!) on a $3k laptop.
The failures are probably due to the dissimilar metals, gold alloy (possibly gold, silver, copper, nickel) and stainless steel (iron, chromium, carbon), and the process of galvanic corrosion. I would have gone with a gold-plated disc, or an actual switch.

I assume Apple has people that know these things.

Haha I’ll be buying a MBP not a MacBook but I see your point.

I think if I have an external keyboard then I think I’ll be in good shape. Too my buddy has a 4k display that looks great so I’d like to pony up for one of those as well.

While I don’t actually know if the keyboard design has changed, I can say the 2019 MBPr’s keyboard feels different / better than the ‘16 it replaces, or a ‘17 I also have frequent access to.

Yeah I asked here about Air for my next computer. I totally changed my mind and will almost certainly get an iMac now to replace my mid 2014 MacBook Pro when I feel the need. This article and the link in it to one by John Gruber convinced me.

I had come to Gruber’s view myself in fact. That recent issues with macbooks stem from an over-concern with thiness and design. If I could replace my macbook with the same exact one, I probably would. As it is I will run this one alongside an iMac as long as it lasts. I see no use for the touchbar either and there is 400$ saving at my spec demands between iMac and MacBook Pro. Even the Air wasn’t far behind in price at my specs, so really… meh.
I found I could do a lot on iPhone regarding portability when I experimented as my wife suggested. “Just leave the laptop where you would use the iMac for a week” she suggested. Good experiment and I am finding no problems on day three.

Yesterday Apple announced Jony Ive is leaving to form his own company. John Gruber’s take is excellent. This is the kind of subject that John just nails. The only thing I’d add is the same advice I tell everyone when a perceived “irreplaceable”...