625: Apple as the Measuring Stick, with Austin Evans

YouTuber and podcaster Austin Evans drops by the show to talk about his content business, how Apple is competing in the wider marketplace and the gear he uses to get work done with a growing team.

Good episode, I was not familiar with Austin and plan to check out his videos. (He sounds right up my alley, why has YT’s algorithm never recommended him?)

Agreed on the iPad Mini, it has become my main iPad just because it is so much easier to use sitting around. It’s a great couch device.

Strong disagree on the watches, especially in the fitness area. Apple has some advantages since they lock 3rd parties out of things like messaging, but Garmin is killing it. They are much better at fitness tracking with things like the body battery and highly customizable workouts, and they do the round face thing really well. Garmin just released a new lineup last week with the high-end watch’s display matching Apples and it has a battery that will last for days. They are big though.

The only reason I am sticking with the Apple Watch currently is because it supports apps that I use on my phone. I am seriously thinking about jumping to Garmin, it’s just a pity that Apple locks out features from third parties. Right now I am splitting my time between an Apple Watch and a Garmin.

@Leeabe51, what are the features that you find are locked our for 3rd parties? I had a cheap Garmin (35) and now I have an AW Series 6 and the third party apps I’ve found have been solid for me. My wife is a permanent Garmin supporter though and we just got her a last gen Fenix for really cheap since the new models just came out. I do echo your thoughts that the round face on the Fenix looks pretty sweet with some very clever designs which fit the round face very nicely. I need to explore it more.

On the AW, I’m currently using the World Time face as it has a nice round feel (using the digital time instead of analog).

Music, Messages quick responses, and phone calls. A Garmin watch can work with the communication apps with an Android phone, but not with an iPhone (it can notify you, but you can’t respond through the watch). Apple Music is also not available to use with Garmin at all, which is my biggest complaint.

Right now, unlocking my phone with my Watch is another important factor that keeps me using the Apple Watch. I understand this feature only works with an Apple Watch at least.

Don’t get me wrong, I really like the Apple Watch, I think it is the better generic smartwatch if you use an iPhone, but the tech community seems to want to compare it only to Wear OS, while ignoring Garmin. I am seriously tempted to get the new Epix. 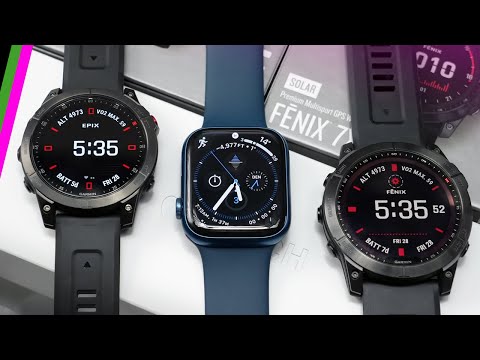 Ah, yes, I definitely see that. From a purely smart watch perspective, the Garmin is crippled in the iOS ecosystem. The features you’ve listed aren’t ones I need, but that doesn’t mean they wouldn’t be useful to others and I think most could definitely be opened up by Apple if they chose (with the exception of unlocking).

I made the wrong assumption you were referring to fitness features where in my experience, third party developers on the watch have largely been able to leverage everything that the first party app can, though there are some bits missing here and there.

Thanks for sharing the video! I’ll take a look at it today!

Even with third party apps for fitness on the Apple Watch, it has one major flaw: lack of buttons. I find the Garmin watches much easier to use on a rainy run.

If you think running in the rain is tough try swimming. In the latter case one has to very precisely remember when to turn fitness tracking on. Once you and your watch become wet, there’s no easy way to enable it.
At least it’s possible to pause workouts with a simultaneous press of the crown and the side button. The unfortunate side effect is that it may coincide with the screenshot key combination (if it’s turned on in settings). This means that every time you pause/resume workout you get a screenshot.
That being said, I’m quite happy with the feature set of the Apple Watch. For (very) amateur workouts of mine every now and then it’s kind of perfect. And swimming, for all its faults due to the physical properties of the watch, it’s still very convenient as it counts all laps.
I can’t help but think that an extra button customisable button or two on the other side of the watch could be quite helpful. Even outside of the workout context.

I’m about a half hour in and feel like I need Red Bull to keep going. I’m biologically incapable of being this amped.

Somewhere in this podcast someone mentions smart home heating (I think). Assuming this more than the cute but limited Google Nest or thermostat, this might be an interesting thing to dig into either on MPU or the Automators. (Sorry I listened to three podcasts today).

Premise - many people own homes where one room is warm and while another is cool. We might want a way to even out the distribution of heat.

Since it doesn’t go into depth, though, @mlevison might want to know that Google Nest doesn’t let you average the temperature across sensors. All you can do is tell it which sensor to prioritize at any particular time.

The other brands I can’t speak to, not having any experience with them.

It was just meant as general knowledge. For example, until recently I had never heard of smart air vents.

I just thought I’d add a little more that I happen to know. Believe me, I very much wish Nest could average the temperature across sensors…