That mention of SugarSync was a cool throwback. I remember using it a very long time ago. Although it still seems to be around – there’s website and they even tweet every now and then. Although the pricing is somewhat steep for my taste – 10 bucks a month for 250 GB where even Apple gives you 2 TB for that price.

Looking forward to that Fantastical update.

It’d be neat to have all-day vs. timed built right into calendar sets so creating an additional calendar wouldn’t be (as) needed.

The separate All Day calendars is such a brilliant idea. Totally going to be implementing this. That combined with the quarterly view in Fantastical is exactly what I’ve been needing.

Here’s the GitHub issue for the maestral issue that David mentioned. It’s not just that it’s indexing too much, it’s that when this bug hits, the indexing never stops, and you can’t use the app.

If you don’t hit the bug, maestral works fine.

For me, it hit me in November and hasn’t worked since. Others hit it in October.

I even tried removing everything from my Dropbox, and it still couldn’t index my empty Dropbox folder.

The app developer makes it clear that he has reached out to Dropbox, Inc several times, but to no avail. And he has no recourse to get Dropbox’s help fixing this.

Okay, the new Fantastical quarterly view is cool, but I’m really excited about the new openings/meeting scheduling/office hours links! It’s the missing piece that makes time slots really useful for me and lets me forgo another service.

What was David talking about the all day events? I must have missed that part.

Someone setup their iMac at my local Starbucks back in 2018 — and then just left it there unattended! 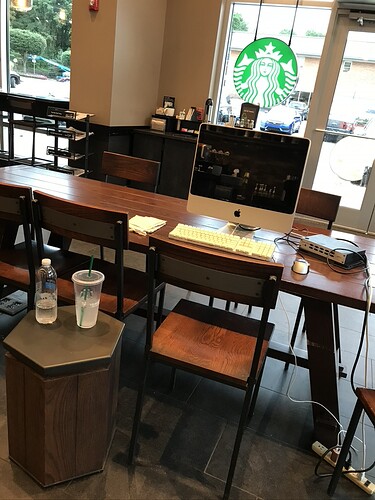 David and Steve talk about reported problems with iCloud losing files, to the extent that David is considering moving back to DropBox. I did a couple of web searches and only found a couple of very isolated, anecdotal incidents claiming lost files. Am I missing a report where there are substantial, documented losses of files from iCloud?

My understanding is the problems with iCloud sync have been extremely well known to developers for some time, but it has been underreported and never publicly acknowledged by Apple.

There is a good round-up available here:

Thanks for the info. From what I read, this sounds more like syncing problems, but not lost files. This doesn’t seem enough to jump ship from iCloud and pay for DropBox.

There’s a few comments in there about people losing files, seemingly related to apps that constantly sync edits. Not enough to concern me.
It does make me think about the reason why I keep some files on my local disk while I am working on them, for example I found I had issues with Xcode and other apps that have hundreds of little text files constantly updating.

@MacSparky I’m fascinated by all the calendars you have. Just curious why you subscribe to a calendar and share others, what’s the benefits of subscribing? I share calendars with other people but some of the people can’t edit the calendar should I change that to a subscription?

Is this finally the billion dollar idea absolutely no one is waiting for?