Apple's Notes and Reminders apps have come a long way since their introductions years ago. This week, Stephen and David look at their history, discuss their current iterations and make some requests for the future.

I just want to be able to change the color of my text in the iOS version of Notes. Is that too much to ask for?

This and templates and I’m in.

after listening to thi Epsoide , I was thinking seriously to come back to Apple Notes and Reminders, instead of using Todoist.

It would be great if I can link Reminders to Obsidian daily note, as in this post.

I’m taking a break from Todoist to experiment with Reminders and I’m happy with it so far. I haven’t made any final decisions, but it’s fun to experiment.

I use Notes for family and personal stuff and Craft for my website and projects. I like having the context switch between apps for different roles in my life.

It’s kind of interesting to see how people are using “notes” in their life. Like when David was talking about sharing a paragraph of a note to somebody on his team, I don’t think in 1 million years I would consider that a note, but a work project. So for him to say he has multiple buckets is not really surprising, because I have multiple buckets for multiple work projects as well.

I think the struggle that I’ve had for a long time is deciding what is a note and what is going to end up as a finished product. I know we’ve talked about this probably 1,000,001 times already lol.

I’m willing to give up my requirement for markdown support if Apple Notes add a web clipper plugin for Safari.

All of my roughly 8000 notes are currently in Joplin app, so I’d need to find a way to migrate them into Apple Notes.

For me, the appeal of Apple Notes is ability to search them in spotlight, and iCloud sync.

I recently migrated my tasks from ToDoist to Reminders, and it has been working fine. I do miss the ability to repeat tasks after completion , and also I miss the ability to delay an instance of a task but maintain the original schedule for future tasks.

I wonder how many people are actively using Goodtask. As I mentioned here, my todoist subscription has expired. I tried to use Things 3 again but just it just could not stick. Goodtask seems a good fit, especially I use Siri a lot to input my reminder. The I(Pad)OS app seems affordable to me but Mac app has a lot higher price tag that I have to really consider the cost benefit equation

Because I’ve posted several times about how I’m using Reminders and Notes, I’ll only share something I just recently discovered.

If I create multiple folders for each major area of work with the relevant Reminder lists under those folders, when I select a folder, all of the lists and related tasks show up on the right. This makes it easy to scan consolidated related lists for next actions.

Here is an example; notice that the blue headings on the right match the lists on the left (though on the right they are sorted differently). 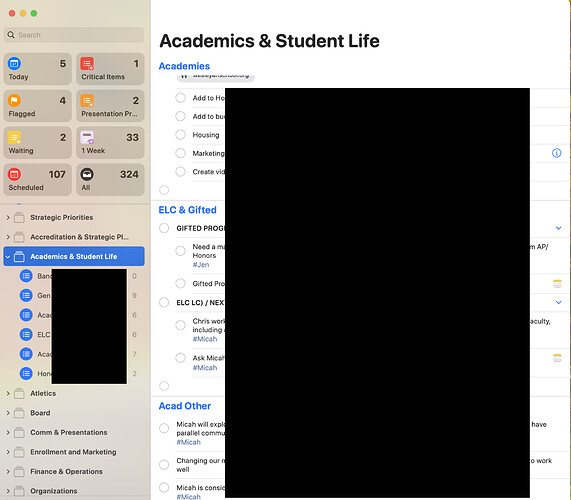 I’ve never used Todoist or Things but I’ve used GoodTask for about 4 years.

I switched from Reminders to GoodTask because I have one particular task that I often need to put off for 30 minutes which is not an option in reminders but is available in GoodTask. Most of my tasks are repeating and GoodTask has served me well with those. I’ve only recently begun to use the subtask system in GoodTask and suspect more capacity there than I’m using.

I’m inclined to give Reminders another try and with the relation between Reminders and GoodTask that will be very easy. The repeating task mentioned above is now handled in another way.

Has GoodTask been updated for Ventura and M1/2 Macs? I prefer not to have Rosetta running if possible.

thanks, I am now trialling goodtask on iPhone, may be I have not looked hard enough yet, I have notifications from both reminders and goodtask for the same event, can I mark as complete to one app and automatically complete on the other app?

So this episode was the nudge I needed to move to Reminders from Things. Things has historically clicked best with my mind (and it’s such a beautiful app), but Stephen and David really did a nice job of speaking to all the upsides of using Reminders and to how well-rounded it is these days. @Bmosbacker’s examples of how he uses Reminders were also helpful to see how powerful it really is.

I do miss the When/Due feature (or defer date/due date), and that would be the #1 thing I’d like to see Apple add. But if anything, it’s pushed me to be more precise about when I will do something (rather than having a to-do item sit in my “Today” view for days on end). I’ve also been more aggressive in moving items to different days if I can tell something can wait or might be better done on another day.

I have been a TickTick user for several years and am quite satisfied with it. I particularly am drawn to the compact presentation — I can see a lot of information on the screen. Simply wanted to pass that along …

As much as I LOVE Omnifocus I have shifted to Reminders and Notes for most things.

I’m considering the switch to Reminders, too. I’ve been using 2Do (which is a great app), but Reminders is probably all I need.

I do like being able to capture to dos in the same place as I make notes (e.g. in meeting notes) but I"m not sure it’s worth the complexity of using Obsidian/Tana.

. I love the new Apple Reminders and the Apple notes. In fact, I have successfully migrated from OmniFocus for most things however, I want everyone to be aware that I have found sync problems.

The sync problems are not working one way, IOS is failing to properly sync with Mac OS. When I enter a new reminder on an iOS device like my iPhone, or iPad, the reminder is not appearing on the Mac version.

I have literally spent eight straight hours with a senior Apple tech documenting everything so that Apple’s engineers can try and find out what the problem is. At this point they have informally said that it appears to be a “backend” problem that Apple is working to fix.

I still LOVE the new Apple Reminders and Notes as having the privacy and cross platform access is invaluable to me.

I love the new Apple Reminders and the Apple notes … however, I want everyone to be aware that I have found sync problems … IOS is failing to properly sync with Mac OS

The only syncing I really depend on is between my Mac and iPhone with the NotePlan app. And it has performed well (so far, at least

I got a scare the other day when I was leaving the house and thought to confirm that NotePlan was displaying up-to-date lists for my errands. And … nothing. Old data. Just sat there. Wouldn’t match what I knew was in the Mac. Then I happened to look at my cable modem, where the lights didn’t look good at all. Turned out Comcast/Xfinity internet was down. Took them an hour and a half to fix it. In the meantime I turned off wi-fi on the iPhone and synced NotePlan with no problem via AT&T cellular. (I’ve since also turned on the Wi-Fi Assist setting which might have helped me switch seamlessly over to cellular when the Wi-Fi went down.)