Has anyone connected Apple Reminders to Obsidian? There is a plugin, I followed word by word by still cannot get it to work. I guess my poor understanding and skill of YAML Front Matter code does not help

I got it working, it takes about a minute to load, longer for lists with a lot of reminders in them (like the main Reminders list). There’s also a bug where the plugin won’t load a list if it is in a group. 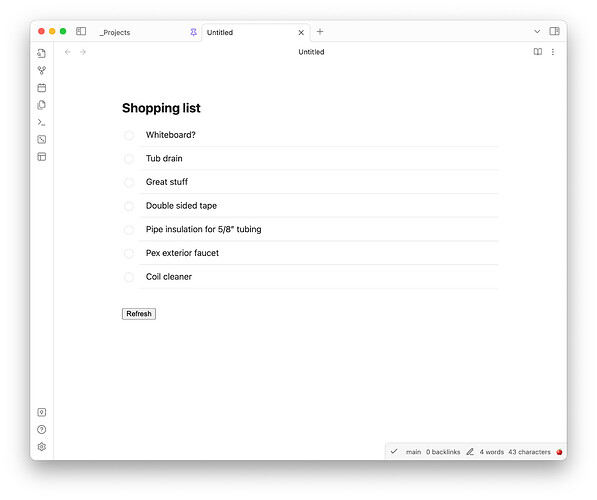 I played around with this plugin a bit last week.

I love the concept. Unfortunately, it doesn’t work with smart lists.

Last week I was able to get it working with other lists, but I uninstalled it because of the smart list issue.

Today I tried re-installing it, and I can’t get it to work with any list at all.

Edited to add: Quitting and restarting Obsidian got it to work with some lists. But still not with smart lists, and not with lists in groups (as @lkhrs noted).

So I’m out of luck, at least for now — I use smart lists and groups extensively, so I have very few lists the plugin will work with.

You say you followed word for word, so I doubt this is your issue, but just in case: I blitzed through things a little too quickly when experimenting this morning, and I forgot to enable the plugin in Obsidian’s settings. Oops.

I literally copied the 3 lines from the web page and addedd the dashes for YAML Front Matter, again, I do not know what I am doing

I forgot to enable the plugin in Obsidian’s settings. Oops.

mine is definitely enabled, I even has an option but do not know how to set it

You need to use backticks ` instead of apostrophes/quotes, and don’t wrap it with the triple dashes used for YAML Front Matter.

On the last line, remove the backslash \. I imagine the plugin author encountered the same difficulty escaping the markdown syntax in the GitHub readme as I do on this forum.

Also, add a new line after the last triple-backtick sequence, and put your cursor there. Similar to Dataview, the plugin won’t render the code block while your cursor is in it.

thanks , I use the backtick `, struggling to find that on the keyboard , so I copy and paste

Still struggling to get the plugins to get my Apple reminders, perhaps I need to wait a bit?