Stephen and David reflect on the apps and services they've relied on for the past year, and one of them makes a rash vow about new Macs.

Hi @MacSparky - In this episode you are refering to using an iPad as and “indicator” or something like that.

Do you have an episode to refer to in regards to this topic?

David has done videos on this. I can’t immediately remember if they are behind the paywall of the MacSpaky Labs, or are publicly available, but I’d definitely start by checking his site.

Are you talking about his use of the IPAD as sort of an information Screen or Information Hub?

The discussion in this episode about DayOne’s On This Say feature reminded of when I went through decades of old paper calendars, you know the ones in boxes moved to every house we’ve owned, lol. I took the time over the holidays a few years ago to go through all of them and logged notable items. Now I’ll often see On This Day items from decades and sometimes up to 40 years ago. It brings a lot of joy.

@ismh mentioned using Rouge Amoeba’s Soundsource to try to get audio to come out of the speakers on both of his Studio Displays. I’m using their app Loopback for much the same purpose on my triple Studio Display Setup. 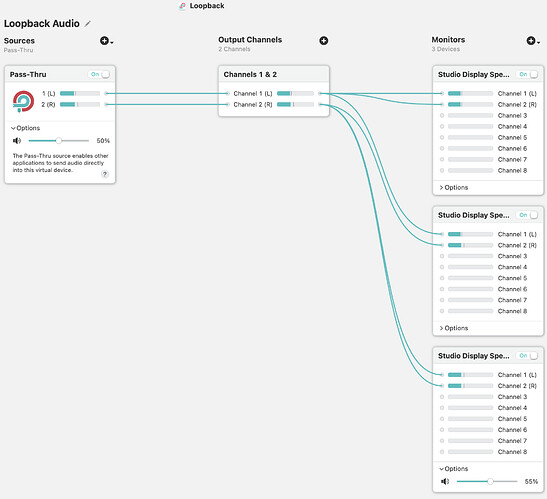 If you look closely you can see that I’ve got left channel going to both speakers on the left-hand display, with the right-hand display doing the same with the right channel (the center display is running L&R normally). This gives much more stereo separation and using the speakers on all three displays sounds considerably better than just one. Probably not a reason to buy multiple Studio Displays, but if you’ve got them for the screen real estate, using them as multiple stereo speakers is a nice bonus.

@MacSparky ”Judge Notes” in 1Password. Now I will have to enter an injunction against lawyers who appear in front of me to prohibit them from doing this.

@ismh talked about using Feedbin, an iirc he said the only reason he uses it is to convert newsletters to email. I recommend looking at Kill the Newsletter, a free service that does nothing but convert NLs to RSS, which you then plug in to your favorite rss reader.

Rock solid, not ad-supported, and there doesn’t seem to be any spyware involved either. It’s just … free.

a free service that does nothing but convert NLs to RSS, which you then plug in to your favorite rss reader.

Just that sentence – too many abbreviations and things that need explanation.

I got out of the RSS world because there was too much mental maintenance to keep it going in my life. An abundance of choice and the requisite maintenance of knowledge to use that choice becomes a burden when it is a corner of your existence that is not that important. I never could really understand what I could and could not get from my RSS reader as opposed to the other fire hoses that spray info at me.

I got out of the RSS world because there was too much mental maintenance to keep it going in my life.

I find RSS an easy way to keep up with blogs and other websites that receive updates at somewhat unpredictable intervals.

No pressure. The posts will be there when I want them. I use Reeder v4 on the Mac to check in on my RSS subscriptions at somewhat unpredictable intervals myself.

Speaking as a trial lawyer (albeit one in England) this amused me too. Although, I was shocked that anyone would ever address a judge with their hands in their pockets in the first place!

Yeah … I never put my hands in my pockets in a courtroom, but I saw one judge absolutely light up a few lawyers over it. In the California, we’d call those the local-local rules.