I’m surprised that I can’t find this, but looking for an Apple Watch haptic (so i don’t wake my wife) alarm clock app or workflow, that includes a more sophisticated wake up process like the Alarmy app (ios) or Sleep as Android (Android).

With these apps, you can set up more sophisticated wake processes (i.e. do a math problem, stand up for 30 seconds, scan a ufc tag), which sort of prevents you from being a snoozer and sleeping in. I have used Alarmy on phone, but they do not have a watch app and have expressed no interest in making one. Further, the principle of Alarmy is to go LOUDER until you do the process, which doesn’t help with a wife, two babies and an 850 sq. ft. apartment. But at the same time, with the arrival of my second kid, I’ve been finding myself sleeping through my 5am alarm and missing workouts more often. LIFE!

TLDR: I want something like Alarmy, but for the Watch which wakes by haptic feel only (and maybe with sound if I really sleep through) until you do an additional process (math problem, stand up, move around, scan a ufc tag, etc.)

Many thanks for your input. I’m suprised this does not exist. I’d also be interested in workflows rather than apps if you have ideas. Gotta stop sleeping through my alarm!

Can’t help with anything complex. My ‘Can’t chance oversleeping alarm’ wouldn’t work for you. My neighbors aren’t fond of it either.

You could create an alarm on your iPhone and choose None as the sound. Your iPhone and Apple Watch will just vibrate. Then create a normal second alarm to go off 5 minutes later as a backup - and take your chances with the wife

I can’t help with any apps either, sorry!

That said, once upon a time (long before Apple Watch), when I still lived with my parents, I half-recall setting two alarms: one on my phone, and the other a few minutes later on some other device in the bathroom down the hall.

It made ‘snooze’ not an option because I had to get up to make sure the other alarm was switched off before it woke everybody else up. Of course, then I was right next to the shower so why go back to bed, right?

AutoWake does haptic only and requires you to tap the screen twice. Once to turn off the alarm, and then another time to confirm “I’m awake”. If you miss the haptic bumps, after a time interval you set it can play music or a text-to-speech thing. I’m not sure if it’s the default or how I set it, but mine is quiet and he’s gradually louder until you turn it off.

You could try AutoWake (a companion to AutoSleep) as suggested above (didn’t see that at first!)
I find the normal watch alarm is enough to wake me with it’s haptics.

This would make a great second device

Especially if you loaded it with a “Boonie”. (Did I get that right?) 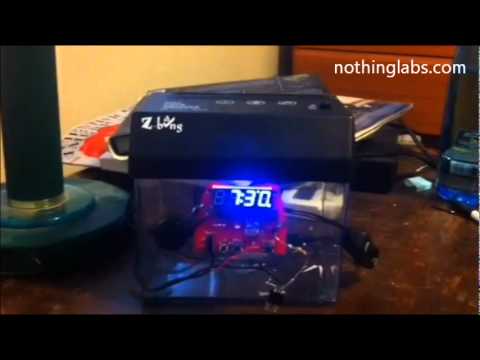 I must confess I’d never heard the term. But yes, I imagine that would be effective!

I have struggled with that myself for my whole life. And for the past year I’ve added bad insomnia, 1-2x/week.