A “notes” app that does not use iCloud to sync

Hello…I am continuing my quest to get my work (academic) computer to communicate across my iOS devices without the use of iCoud for syncing. I am wondering if there is a good note taking app that syncs across platforms without using iCloud? I am currently working off my iPad for any notes during the day at work, which is fine but not idea. It appears that I can access other syncing sites for apps - I am doing so for OmniFocus and 1Password. Thanks!

Evernote. Long time paid user and love all the features.

Thanks - I had used it in the past but moved away about three years ago. May look at it again if there is not other solution

What are your requirements for note taking? Do you need to be able to insert images into your notes or change the font sizes/types/colours, or would a Text/markdown file do?

OneNote for Microsoft works across plenty of platforms and doesn’t sync through iCloud. I don’t think Bear uses iCloud for syncing either but probably isn’t available on the other platforms you want to use.

I used to use nvALT on the Mac and Simplenote on iOS, syncing via Dropbox.

Basic notes and lists. I will look at One Note and Bear. Thanks

If you use DEVONThink you can use different note taking apps or just DEVONthink to do your notes. Also you can sync with Dropbox or WebDAV for syncing. Evernote also doesn’t use ICloud

I believe Byword allows you to set a custom cloud service, as does NValt/Simplenote as described by @ChrisUpchurch. If Dropbox is blocked, there may be another service that you can use, like Box or OneDrive (maybe Google Drive, but I thought there was a reason people haven’t suggested using that with NValt before)

Having looked into Bears syncing further it looks like it does use iCloud so that one is out of contention.

Haven’t used it for ages, but Simplenotes might meet your needs. 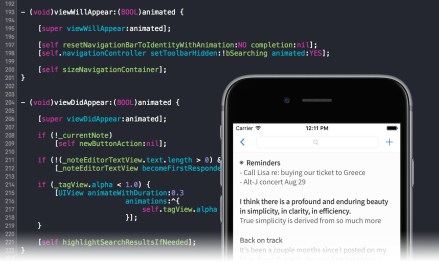 Simplenote uses Simperium to store and sync notes across multiple app platforms. The Simperium libraries handle all the networking so developers can focus on building a great user experience. Contr…

+1 for nvALT for just quick note taking and using something other than iCloud, and when I was using it I used Dropbox.

Question, are you looking for a non icloud solution because you work blocks it?

Thanks Jack! I appreciate the advice!

Yes, an app that syncs across all devices but does not use Drop Box or iCloud.

Thanks - I appreciate the feedback.

Devonthink can also use webdav, which might get you around the restrictions at work,