I’m a developer, not a designer. … I do use Pixelmator Pro now and then? … I guess the Affinity tools are not for me?

I’m mostly a programmer, but I do some graphics work because I have to. I flip-flopped back and forth between Affinity and Pixelmator back when Pixelmator was the new kid on the block, and decided that Affinity meshed better with what I remembered from Photoshop, and was the more stable company - so I went with them. The fact that they had raster, vector, and document production products was helpful as well.

But if you use Pixelmator Pro infrequently and it’s fine for your use case, I don’t know any reason why you’d want to switch. At this point it’s a solution in search of a problem from your perspective.

That said, it has free demos and it’s cheap enough at full price that if you do need it in the future, you’re not really missing much by skipping the sale.

My BIG bugbear in Affinity Photo was cropping. Most days I do a few photo edits for various CMS’s we manage for clients and Affinity by default locks the aspect ratio, and I could find no way to turn it off.

A small thing I know but that extra click or often the undo as I forgot ended up being annoying. Photoshop remembered the last setting Affinity does not.

I find Pixelmator Pro much quicker to open and fine for my limited usage.

My BIG bugbear in Affinity Photo was cropping. Most days I do a few photo edits for various CMS’s we manage for clients and Affinity by default locks the aspect ratio, and I could find no way to turn it off.

Hmmmm. I’m not seeing that on the iPad in the old version, or the new. Mine defaults to unconstrained upon selecting the crop tool.

In short. No. If you want the absolute best quality conversion from RAW, Affinity Photo is not the best choice. However… for basic use it is more than capable, and with the ability to now return to those develop settings later…

This is now its killer feature for RAW files. Personally, I find the (lack of) workflow of a product like Affinity Photo or Photoshop to be a deal breaker when it comes to processing photos. But if you want to do stuff beyond light and colour and some corrections, then Affinity Photo is an excellent place to do it.

Pixelmator Pro is far faster opening and does pretty much what I need.

The slow opening of Affinity products for the last couple of years was (apparently) down to some issue with code verification. Serif handled this whole situation very badly by never properly explaining it and never fixing it. The v2 apps seem to have solved this problem. And as with v1, once they’re running they are lightning quick.

My adobe subscription ends in two months so the timing for this is good. the problem is I am in love with Adobe Premiere.

I guess I’m a bit of a photo hobbyist. I think Affinity is easily used for things like photo-stitching multiple shots into a panorama, or stacking multiple photos for a detailed macro or some smooth waterfall shots.

I’ve also used it to make a color photo b&w, and then selectively bring back some color.

I’m sure lots of other tools can do those things, likely including tools I own, but I find these easiest in Affinity.

The universal licence means that iOS version of those apps are linked to my Apple-ID only or can I share them on my Apple Family? Anyone knows? 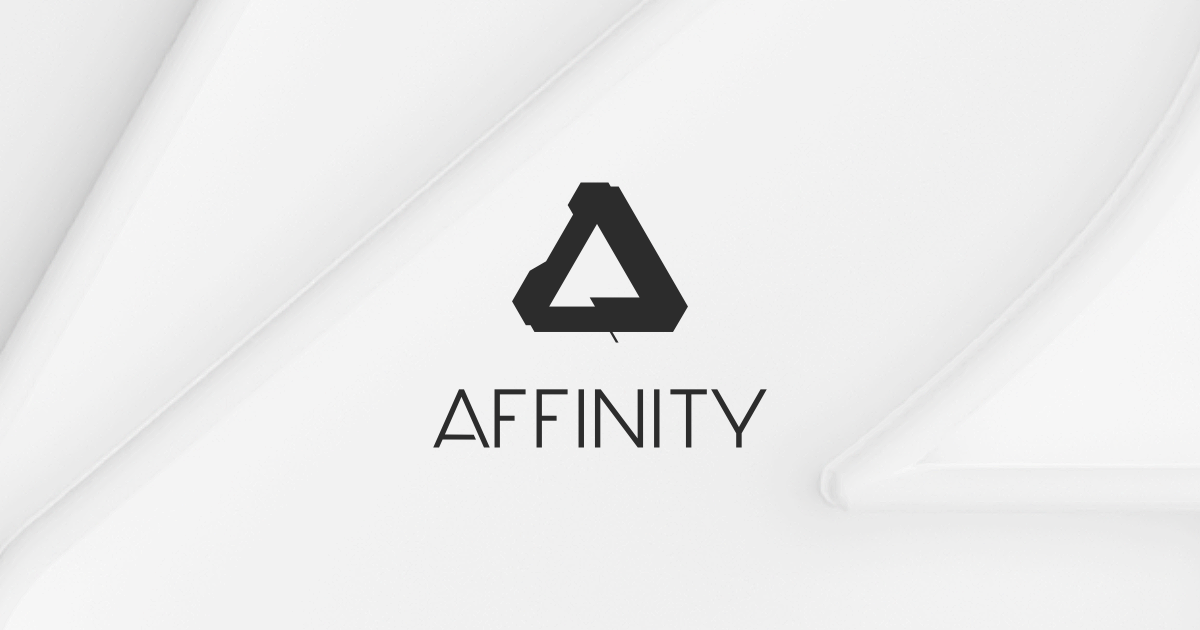 Find out all about Affinity V2 and the new Universal License with our comprehensive FAQ.

As a private individual you can install Affinity apps on as many devices as you own which run the operating system you have purchased a license for (of course in the case of a Universal License that means you can install on any iPads, Macs or Windows PCs you own). Other people (for example, members of your household) are also allowed to use the apps on those devices. However, only you are allowed to use the apps for commercial use—if any members of your household need to make commercial use of the apps as well they will need to purchase their own license.

The universal license is being handled by Serif/Affinity. It is working across platforms, even on PCs. I think this means that the Apple-ID itself is not the key for the Universal license. It is your Affinity account - which is necessary for the universal license (it works on PCs, too). So, I guess that this license technically will not use Apple’s Family Sharing. Your Apple Family is allowed to use those apps on your devices. If your Apple Family is allowed or able to use your Affinity account on their devices is a question I am neither qualified nor comfortable to answer.

I am also not sure, if a regular license (limited to one OS) is using Apple’s Family Sharing. I would not bet on it when reading the FAQ.

EDIT: I find the Universal License to be a very generous one: one user, no matter how many devices this user owns on all platforms - and others are free to use the apps on those devices (non-commercial).

I always recommend buying direct from the developer, in this case Serif, when that is an option. And then you are in control of download, updates, and sharing. Serif has a great website and is easy to work with.

Complete list of purchase options and pricing for Affinity 2 products.

I always recommend buying direct from the developer

thats my philosophy as also. it’s one reason I dislike iOS apps so much.

I was hoping for an Adobe Lightroom replacement …

I understand where you are coming from, but for me the lack of a digital asset manager (DAM) is a good thing. I like opening and editing a photo from anywhere without worrying whether it has been imported correctly. I use my own folder structure in the Finder. The DAM in Lightroom and Capture One just adds a layer of file management for me to screw up and get the app out of sync with the Finder.

But I also use Photo Mechanic to ingest, rename, and cull my RAW photos and to view the JPGs that I make.

And Photo Mechanic has an optional catalog feature, which I don’t use, but which may suit your desire for a DAM.

And why I don’t use SetApp

I don’t understand what you mean. I copy my photos to my Picture folder, which I manage manually in chronological order (batch rename using Nikon’s transfer app). Then I open Lightroom and import them. It doesn’t touch my file structure unless I tell it to. Lightroom is just a really easy way to organize/search what I do have. If I want to edit a picture I can use whatever app I want, but I wouldn’t edit with anything that baked in the changes, so it’s easier to use Lightroom anyway.

I still keep photos in the system file hierarchy (Finder). I put them in using Finder and then use the sync command in Lightroom. I can always access the files with any app I want, however for virtually every photo I take now Lightroom does all the processing I need.

I did take up Aperture early on, without it managing the photos (in other words, the photos were not kept in its database files) I finally trusted it enough to go to managed photos only to have Apple drop Aperture within a year. Never again.

I … use the sync command in Lightroom. I can always access the files with any app I want, however for virtually every photo I take now Lightroom does all the processing I need.

Sounds good but then I wonder why you were hoping for a Lightroom replacement? Maybe to escape the subscription?

Yep. That annual payment really hurts since I don’t need their cloud nor do I need Photoshop.

I don’t understand what you mean.

Once my photos are in Lightroom’s clutches, I feel somewhat restricted in what I can do with them. It seems so easy to do something wrong, especially if I forget and access them via the Finder. I admit this is my problem as many people love the Lightroom workflow, especially those who take more photos than I do.

my feelings also but Premiere Pro is really good and Final Cut is just goofy imo. How much of a fanboy do I need to be to switch? I bought FC and was disappointed with it almost immediately. When Davinci Resolve comes out for the iPad “Pro”, I will check out both the macos and ipados versions at the same time. Maybe DR and AP2 will loosen Adobes hold on me.

I think you’ll really like DaVinci once you sink your teeth into it. If you’re interested, I’d start now with the Mac/Windows version.

But, I also know how it is with Premiere. It fits like a glove and it’s a small part of the expense on any particular video project. If someone hasn’t tried FCP in the last few years, I’ll sometimes suggest they re-evaluate it, but there’s a strong subjective preference in video editor selection, in addition to considerations like what the rest of the team or workflow is using.

Thanks for sharing this. Since getting the M1, I have wanted to use it for everything and was waiting for a sale on the desktop version of Photo. I’ve used the iPad version for awhile.