Exciting day for users of the Affinity suite of creative apps, especially iPad users! Serif have released the new 2.0 suite which includes Publisher for iPad. Publisher was previously only available for Mac/Windows. So, now all 3 desktop apps have been updated and all three are also updated and available on the iPad. I’ve already imported a project from my Mac into Affinity Publisher on the iPad and it’s fantastic. Screenshot below. 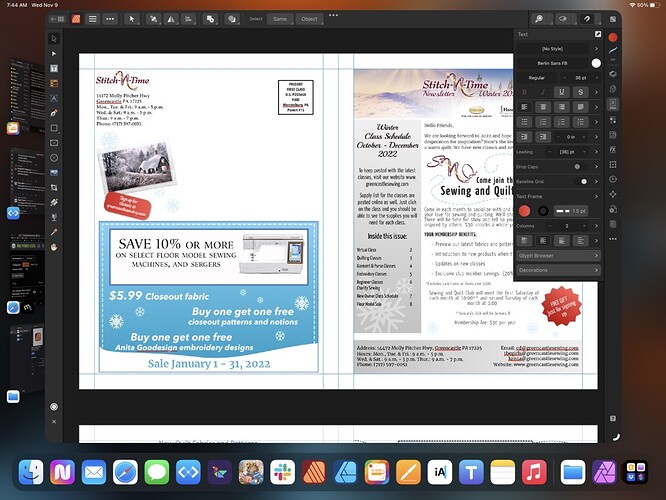 If you’re not familiar with the Affinity apps, they are Photo, Designer and Publisher and are similar to Adobe’s Photoshop, Illustrator and InDesign. I dropped Adobe several years ago and have never regretted it. The Affinity apps have met my needs. Not only are they fully featured but in my opinion are far more responsive than the Adobe apps. The apps on the iPad set the bar for what professional creative apps can and should on iPadOS.

No subscription and they’re offering a launch special, all of the apps (a universal license), desktop and iPad, for $100. I think that includes Mac and Windows apps as well. Or buy the individual apps at 40% off the future full price. I don’t think I’ll use the Mac apps much but bought the universal license anyway.

I was hoping for an Adobe Lightroom replacement, then I could get rid of Adobe completely. Ah, well.

Got my Universal License too - I do use both the Mac and iPad apps quite interchangably. For “serious” stuff, I do find the workflow is faster and easier on the Mac with a big screen, but the apps are amazingly powerful on iPad as well. Have been using them for years and years.

That said, I still keep my “photographers plan” with Adobe. Hard to walk away from that toolset, and what they are currently doing with the Sensei AI technology is quite remarkable. IMHO.

If you’re not familiar with the Affinity apps, they are Photo, Designer and Publisher and are similar to Adobe’s Photoshop, Illustrator and InDesign. I dropped Adobe several years ago and have never regretted it.

Same. Affinity can even usually open the old PSD/AI/etc. files from the old apps.

Not a great time for a $100 hit to the pocketbook, but I’ve been using my V1 Affinity license for 3 years with no hassle, no problem, and no subscription. And there are people that have been doing that since 2015 - so I would think that V2 will last me several more years.

I do use both the Mac and iPad apps quite interchangably. For “serious” stuff, I do find the workflow is faster and easier on the Mac with a big screen

We have the same workflow. I hope the new version would made it easier to solely just work on the iPad on Designer.

Will get the Universal license. This is just a no-brainer upgrade for me as they brought so much value and I’ve made money from using their apps.

This is just a no-brainer upgrade for me

Bought it. No brainer for me, too. Very hard to resist at that price.

Nice little surprise - downloaded all 3 apps on Mac, went through the license activation on one of them, and for the other two I just had to click “accept license” when it first launched. It didn’t make me re-authenticate to their registration server, enter my key, etc.

Exciting. I only use Photo, but this is an easy upgrade.

what they are currently doing with the Sensei AI technology is quite remarkable. IMHO.

That’s what I like to see from Adobe. They are a funny mix of upmarket and monopolistic pricing. As apps like Affinity provide options so competitively priced that switching is worth trying to do, Adobe should be getting cooler and more powerful for experts, high end and heavy users.

Instant buy of the Universal License here, too. Some of the new tools are incredibly powerful. My favourite may be the mesh warp tool — a live, non-destructive warping of any objects.

me too, I bought the universal license. Do a rough calculation, no point in just upgrading one app to V2 although I do not use the other two apps much. The pricing for upgrading 1xMac app + 1xIpad app is almost 65% of the of the cost of universal license. I think this is their pricing strategy all along

I am no RAW expert, but I think some of the videos might be of help to compare it with the competition. 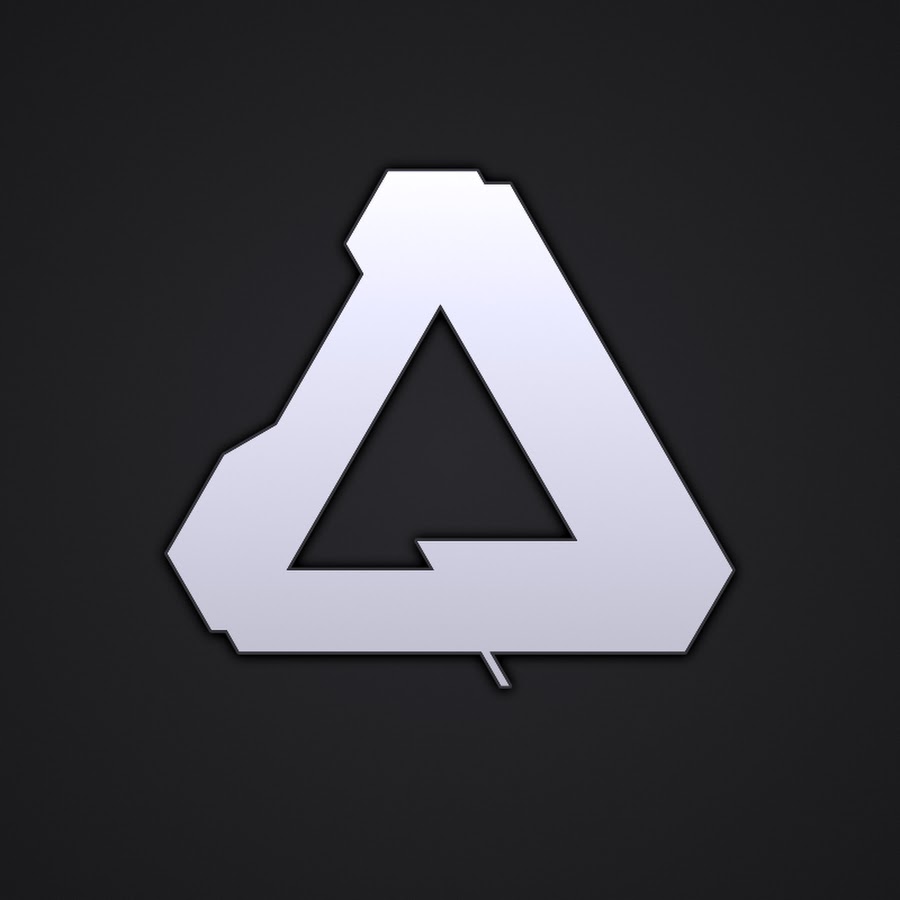 Learn all about Affinity, the award-winning suite of professional creative apps, right here on our official YouTube channel. Our videos cover everything from the basics to more advanced step-by-step tutorials, first-look previews and other unique...

I watched this one yesterday (the video should start with the new Non-Destructive-RAW editing, I used the time code where that chapter begins): 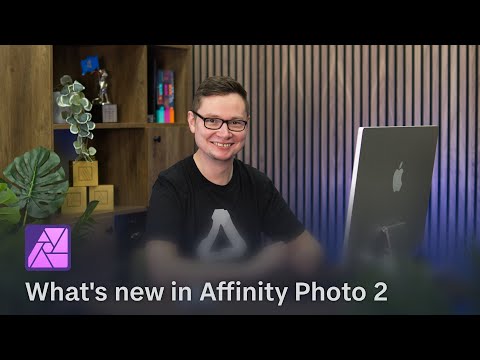 I found it to be quite impressive.

Apart from that: if you download one of the Affinity apps from the App Store, you should be able to test them 30 days for free without the need to create an Affinity account.

I have bought the Universal license, too.

With Affinity, you don’t just stop with a RAW editor as I always did with Lightroom (Adobe Camera RAW). I almost never took a photo beyond that into PhotoShop. (Granted, I’m not much of photographer. Just an amateur.) Even Capture One, which is very nice but very expensive, sticks to editing RAW files.

And the killer Affinity Photo version 2 feature is that you can now return to the initial develop phase and make additional tweaks without losing any other work you have done.

I’m a developer, not a designer. Also, I don’t use any of Adobe’s tools, but I do use Pixelmator Pro now and then? (But less than 20% of its functionality?)

Any non-designer/non-photographers amongst the user base? What’s your use case?

That universal license was a no-brainer for me, too. Love that I can use the license on their apps in the Mac App Store, because updates are automatic.

Same situation, I have the affinity suite sitting here idle. Pixelmator Pro is far faster opening and does pretty much what I need. Only one gripe it will not open certain webp files.

Not sure if I will upgrade, it sounds like a bargain on a certain level and I have needed to use Affinity Photo on iPad a few times when travelling, will give it a few days and then decide.

I’m not a designer and use both Affinity and Pixelmator Pro. It just depends on what you’re doing with images and whether you find some tasks easier in one program or the other, or whether you find value in knowing more graphics editor interfaces. (I dip into the open source ones, too, for that reason.)

Sounds to me like you should stick with what you have! The Affinity apps are amazing, and very useful for the jobs they are designed for. It seems to me that you were not at all the target for this kind of suite of applications. It’s not a good deal at all if you’re not going to be using them because you don’t need them.

Ha! Count me as an exception, at least when it comes to these kinds of apps. I use the three Affinity apps, and that’s it for that whole category of work. I’ll sometimes use Apple’s Pages app if a client wants to have access to source files so that they can modify documents with new information. I guess I count myself lucky that I have found applications that I’ve gotten very comfortable with that enable me to do the work I need to get done. And honestly, they’re quite a pleasure to use.