Affinity Apps Worth Buying On Sale?

On the last episode, the guys talked about the crazy sale for the Affinity apps.

I’m not a designer, but always have a copy of Photoshop Elements for little things here and there, and Keynote for decks or presentations, which don’t come up that often.

Would love to get the hive mind’s input - at the current Affinity sale prices, it seems crazy not to buy something, just to have, but I’m not sure if I’ll ever use it. So, two questions:

All in fun,
Rich

I haven’t had a chance to play with it much.

Allison Sheridan over at podfeet.com has written a few blog posts on the various Affinity products.

Allison also did some screencasts on Photo over at ScreenCastsOnline.

I bought them on sale hoping I’d use them, especially on iPad, but the differences between Photoshop/Illustrator and Affinity mean I could not really work anything out without Googling it. I eventually gave up when Photoshop for iPad came out, and went back to Adobe, because I didn’t want to re-learn 20 years of experience with Adobe. Also, I don’t pay for Creative Cloud, my employer does.

They are great apps but need a large investment of time to learn. It was taking me too much time even to do simple things. This was only Photo and Designer, I’ve not tried Publisher.

I didn’t want to re-learn 20 years of experience with Adobe.

I’d start with learning the most commonly used tools and workflows that will be needed.

We have the basic concepts down. It’s just trying to figure out where the tools are that will take time. It’ll be worth the investment.

I would definitely take 20-30 minutes out of each day to learn about a new tool. It could be one of the books the affinity web site sells or a screencast tutorial from Udemy or Lynda.

Also, I don’t pay for Creative Cloud, my employer does.

In this day and age, not many jobs are a sure thing. I’d say it would be good to start building up the small skills now while we still have a job. If we ever decide to go indie or work for another company who won’t bless us with a CC subscription, we’ll be better prepared.

I used to be a graphic designer working out of Illustrator. Since I don’t have regular clients anymore, I couldn’t justify the Adobe subscription. So, I turned to Affinity Designer—and I’ve been thrilled with the results. It’s capable of doing anything I’ve needed, sometimes faster than the old Illustrator way. There might have been some initial friction but it was well worth the savings.

Is it worth having Affinity Publisher to use instead of Keynote, even if I’m not actually “publishing” anything?

They are very different apps. Publisher is more akin to InDesign—made for books/magazine/etc., not so much for presentation decks.

All very helpful. I think I’ll sit out on this sale. Thanks, all!!!

Normally, you’ll see the affinity apps go on sale for 30% off for Black Friday’s wry year. I don’t think I’ve ever seen it at half off.

I just took the plunge on Affinity Designer, both on the Mac and on the iPad…

In consideration of my quite frequently coming to a point where I’m scrounging around for free solutions (such as Canva et al) to do the occasional small projects for internal use, figure this might prompt me to take the time to learn it, and then use it…

Nothing major, but hoping this will offer me something that even I can cobble together some nice looking organograms, the occasional poster/flyer/info sheet…
I unfortunately just couldn’t justify the cost of Omnigraffle – hoping this gets me close enough!

I also took advantage of the 50% to get Publisher and the iOS version of Designer. I haven’t even dug into the apps as I’m the least artistic person in my household. I’ve owned Affinity apps since Day 1 and have never been disappointed when I’ve used the apps.

Here’s one thing I learned early on. On their forums someone asked “are you guys using Core Image (an Apple image framework) for your photo app?”

They responded with “no that Core Image wasn’t fast enoug to do what they’ve wanted to do” and they wrote their own graphics processing core.

I know that if I just dig in and really learn their system I won’t need much else. In fact my perspective on app pricing has been tilted because of Affinity. When I see iOS image editing apps pushing subs along with $50 one time purchase I laugh a bit because I know Affinity devs are more talented and their iOS apps are a mere 20 bucks …10 bucks on sale.

When I build a PC for fun I’ll rebuy the Windows versions of the apps not because I need it so much but rather I want to support a company that makes a credible suite not named Adobe.

Appreciate the reply. I have the artistic ability of a gnat.

Hopefully, will be able to make do with some YouTube videos to get me enough of the way into it, to compensate for my lack of creative skills.

I’ve been an Adobe user for more than 20 years. I switched to Affinity Designer first because I gave up on the constant bug and reliability of Adobe Illustrator. I find the speed and workflow on Designer to be faster and easier. My first major reason of moving out of Adobe was cost but after a few months of switching I started to like Designer even more. Illustrator is too much invested in its decade old tools that it doesn’t want to change its workflow anymore even though there are solutions or ways to provide designers to achieve design solutions that are faster and better. Moving out of Photoshop took another year. I had the same problem as you when I started because I was still expecting everything to work like Photoshop on Affinity Photo rather than see their own approach and solution. When I removed my pre-conception of expecting it to work like Photoshop, that’s where it clicked with me. My advice is to use Affinity for your own passion projects first instead of using it for client work. This way, you’ll have fun learning how it works.

Affinity apps are also natively made for Mac, that means they can easily adapt to improvement and changes to the OS. Same way they are building it for Windows and most specially on iOS.

New generation of designers right now are using tools that most professionals would consider toys. They use Procreate, Affinity apps, Lumafusion on the iPad to create stunning work. Adobe is trying to catch up to them with their approach with Photoshop on the iPad and its taking it slow. The disadvantage with this approach though is that their old users still expect their iPad apps to work like their desktop counterpart.

It’s that time again: all Affinity apps can be bought for 50% off. 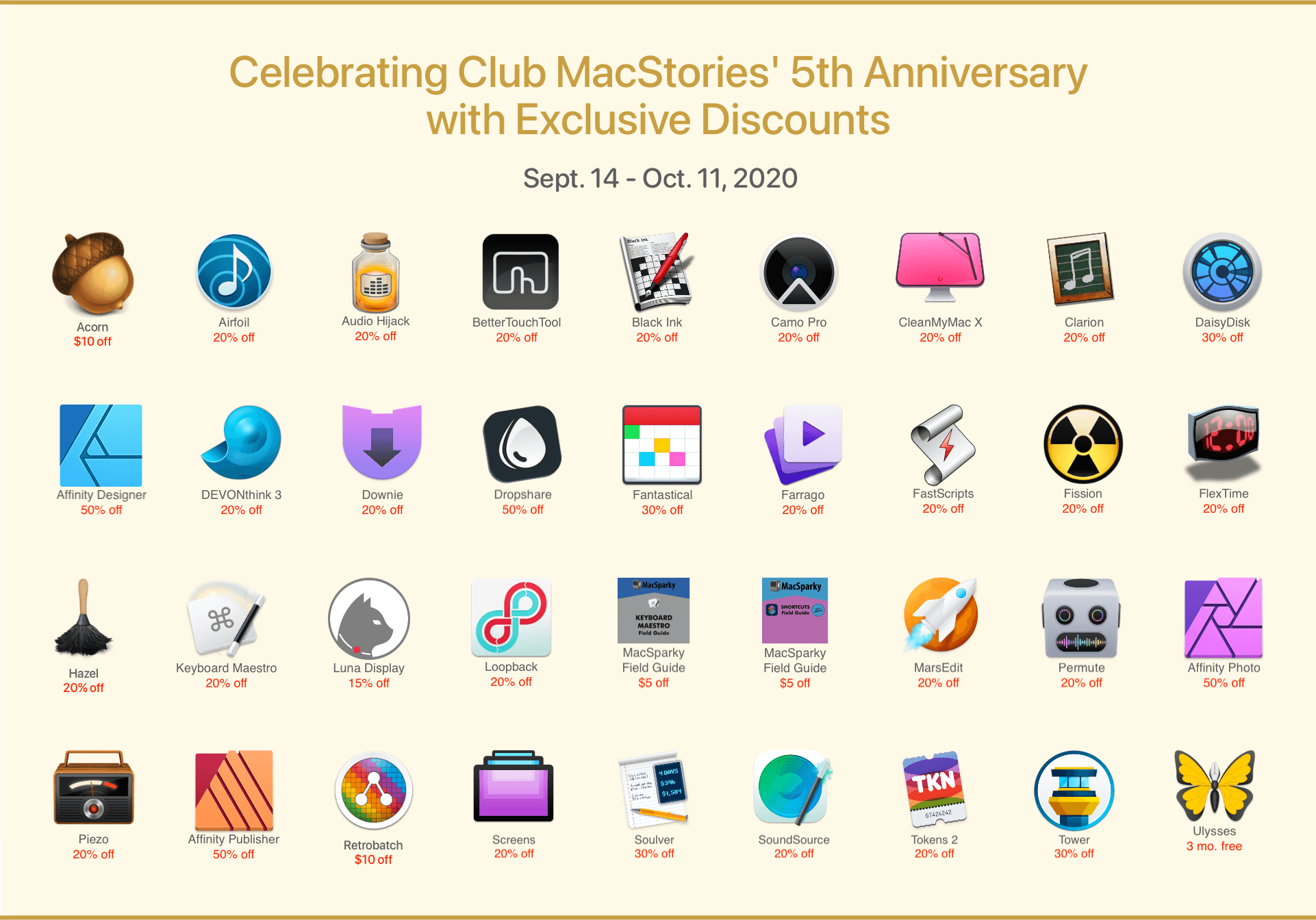 Club MacStories Turns 5: A Month-Long Thank You to Members Featuring...

Today marks the fifth anniversary of Club MacStories. For the past five years, the Club has grown to become an integral part of what MacStories is. It’s the fuel that has allowed us to do more on the site, add new perks for Club members, and expand...

Of course, there is much more than the Affinity apps, but I was remembering this topic when I saw the post on MacStories.net.

Little asterisk there: the discount is available for MacStories.net Members only.