I’m not sold on thumb-operated trackballs

My thumb is not that talented, so need a finger-operated device.
I formerly used the Logitech Trackman Marble, but much prefer the Kingston Expert.

I’ve also looked at the roller mouse, but they seem overpriced. There’s also the issue of running out of horizontal movement. I think the pointer keeps moving at the ends. I’ve forgotten exactly. Our RollerMouse line of products has one simple mission: to make you better at what you do. A RollerMouse is designed to sit in front of your keyboard and relies on our patented Rollerbar to control the cursor. The RollerMouse can be used...

On a side note, I didn’t have much luck with the Logi Options software, but I think Logitech has since added support for the Logi Options+ (which seems better). Fortunately, Better Touch Tool has good support for this mouse and has proven to be very reliable, so I think I’ll just stick what that option indefinitely.

I formerly used the Logitech Trackman Marble, but much prefer the Kingston Expert.

I tried a wired Logitech thumb operated trackball many years ago. I purchased it for an executive to use while he had to wear a metal brace that extended into the palm of his hand. I can see how some would like it, but he went back to his mouse after he recovered.

Another vote for the Kensington trackball. The three features I appreciate are as follows: adjustable trackball for cursor motion, rotation ring for scrolling actions, and chord-able input buttons for mouse-click actions. I’ve only partially tapped into the ability to set button actions specifically for different apps.

Tilt it with a shim under one side for better ergonomics. 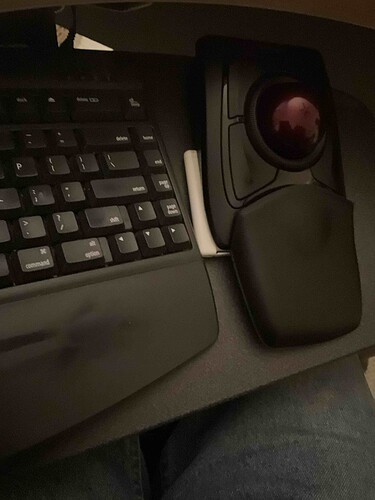 I’m a former Logitech Trackball user and have long lamented it’s passing and being discontinued.

I currently use the MX Vertical at home as linked above, but I do carry the Logitech Ergo 575, in my laptop bag and have found it surprisingly good for a thumb trackball.

I’ve also played with a number of the Elecom trackballs on Amazon, but none of them were particular good. This was the best one I tried but the feeling of the ball wasn’t very smooth.

Also, I’ve found a noticeable difference with trackballs on macOS vs Windows in recent years, where I’ve found trackballs working better on Windows for some reason (with no additional software).