I know this topic has been discussed a ton of times, but I’m not seeing any within the last year or so.

I’d heard good things about Vivaldi. Downloaded it, and compared to Chrome or Brave it’s mind. blowingly. slow. Same tabs, synced over via the Workona extension - just takes forever to load. Plus it’s Electron apparently, so Moom and other deeper-level system stuff just doesn’t work correctly. That, and the “can’t close a tab” bug hit me. Some users seem to have problems with it, others don’t.

So Vivaldi is out.

Brave was my go-to until last month when I decided to try Vivaldi. It actually seems to be good at blocking trackers and stuff, and I’m probably going to switch back at least temporarily. I don’t really have major complaints with it.

Whatever I land on, I need something that’s pretty standards-compliant. I’ve also been using Workona to keep my tabs straight, although I’m not sure whether that’s going to continue since they just dropped the hammer on free users in a very unpleasant way.

Safari is my main and Firefox is my secondary.

Firefox Multi-Account Containers – Get this Extension for 🦊 Firefox (en-US)

Brave is my main browser and Safari is my backup. Deleted Chrome a long time ago as it was just using to much resources. Have Firefox around to do some containerised browsing (as per @MereCivilian’s post) when needed and use Unite (Safari Webkit) and Coherence (using Brave) to create web apps for Slack, LinkedIn and my accounting software

I use Vivaldi for one function only and that is to run my work Microsoft 365 in web mode using tiled tabs side by side. It’s brilliant for that and as I can do 99% of my work within Outlook and Teams. Furthermore, I do not have to use the work laptop cluttering my already full desk at home.

Tiled tabs give me 2 Teams windows side by side on a 4k screen (one for active meeting and one for calendar and chat) and also 2 Outlook windows side by side (email and calendar). Each half screen is big enough to watch inline presentations and attachments. Further single tabs are used for Word and PowerPoint all connected to a company OneDrive. I put Vivaldi in full-screen mode on a separate workspace so I can concentrate on work when I switch to that.

I use Vivaldi for one function only and that is to run my work Microsoft 365 in web mode using tiled tabs side by side. It’s brilliant for that and as I can do 99% of my work within Outlook and Teams.

@simonsmark MS teams is the worst app on my Mac. Wondering if I can switch to the web version without significant downsides. Do you know how well does Ms Teams video calls work in Vivaldi ?

The new version of the Microsoft Teams desktop client will not be based upon Electron. 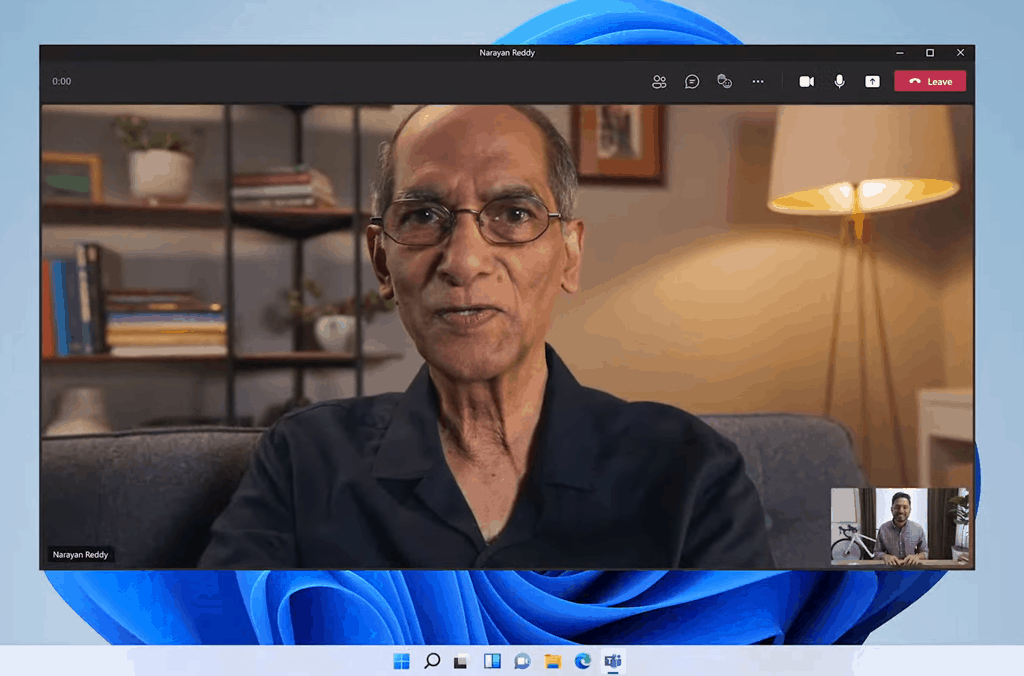 Microsoft Teams 2.0 will use half the memory, dropping Electron...

Credit to Brad Sams for first reporting on this, Alongside the Windows 11 announcement today, Rish Tandon, the CVP Engineering for Microsoft Teams, posted on Twitter about changes coming to Microsoft Teams architecture. It gave a lot of useful...

no problems at all. All audio and video works well. Only downside was multi-window in Teams, which is easy in the app.

I have circumvented that with tiled tabs in Vivaldi and double login. Works like a charm. Prefer this way over the App solution. Will try the upcoming new release as well, but can not use app for work, which is on a secure environment and they need device authentication for App use. Using the web clients prevents that.

I was on Firefox for X-platform history syncing, but then I got an M1 and used Safari for 6 months (and used my Windows machine less) knowing it’s best/efficient browser on the desktop platform. Several recent developments have caused me to go back to mostly Firefox:

I do also run MS Edge, specifically for chromium needs, like my Jitsi server for work. I do like that one as well, though it’s getting a little bloated with feature buttons.

Same as @MereCivilian - Safari as main and Firefox as a second, for the same reason.

Technically, Choosy is my default browser - this throws all my work related links to Firefox and Firefox ensures it opens in the correct container. Firefox is cross platform is what I would use on Windows. However, I’m trialling Vivaldi on my work laptop - @simonsmark solution sounds interesting and I might give it a go on my larger screen, as that sounds like it could deal with a pain point for me.

It isn’t. It’ll be available for macOS too.

There’s discussion of Mac support for WebView2, but it doesn’t look like it’s on the same timetable as the Windows version that’ll be baked into the OS. There’s a non-recently-updated GitHub reference to track the Mac support:

Has anyone tried Opera recently? I used to use it years ago but I haven’t followed its development.

The original developers started Vivaldi after they sold Opera

There’s discussion of Mac support for WebView2, but it doesn’t look like it’s on the same timetable as the Windows version that’ll be baked into the OS. There’s a non-recently-updated GitHub reference to track the Mac support:

Isn’t that specifically for Microsoft Edge?

Has anyone tried Opera recently? I used to use it years ago but I haven’t followed its development.

Yes, and it’s a great web browser for power users of any operating system.

Opera has one of my favorite features in any web browser. 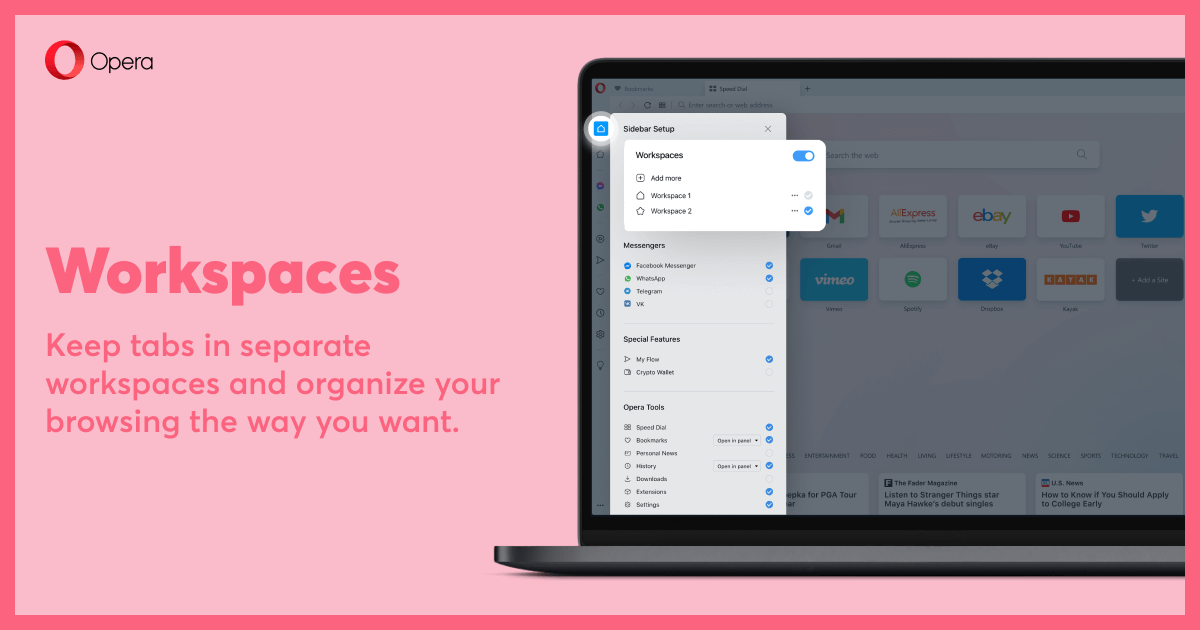 Opera lets you group tabs into separate workspaces and switch between groups with one click. Add, customize, and edit your tab groups according to context. Enjoy a tidy solution to working with many tabs.

The original developers started Vivaldi after they sold Opera

Wikipedia has the full scoop.

Isn’t that specifically for Microsoft Edge

Nope. It’s for WebView2. Says it at the top of the thread. That said, it’s logically a component of Edge - so it would be necessary to port it before porting the whole browser.

Oh, I thought WebView2 was its own thing. In that case, what makes the new Microsoft Teams desktop application any different from a PWA?

Oh, I thought WebView2 was its own thing.

It can be its own thing and this still be true:

it’s logically a component of Edge

If it’s a framework that Edge makes use of, you’d have to build that framework on macOS before you could build Edge.

You’re the first person I’ve seen who actually likes the new design for Mozilla Firefox. Be careful out there!

On macOS: Firefox, my one true browser
On iOS and iPadOS: Safari, I find it just works the best
On Windows (corporate issue): Chrome and Edge, because I have to.