My Garmin Vivoactive HR broke (the portion of the case that holds one of the watchband pins). The watch is still functional and I’m tempted to find a maker-space and have something 3D printed I can glue on!

But, I’m going nuts without a watch on my wrist!!

Have any of you tried the Galaxy Watch?

Stay connected longer. The features of a smartwatch and the natural feeling of an analog watch in a single package. Galaxy Watch links you to the world around you.

I imagine some of the features will be limited/slower as it is designed to pair with an Android phone.

I like to keep track of my step count, activity and sleep. It’s also nice to see texts, etc.

Looking for something to “bridge the gap” for me until Apple Watch v. 5, if the battery life is better.

Love the GPS features of all.

I also imagine the Apple Watch will have the advantage of working better with apps., etc.

After reading this article; I’m leaning more toward Apple Watch; but may try a Samsung Watch from Costco as they have a decent return policy. The comparison article I mentioned: 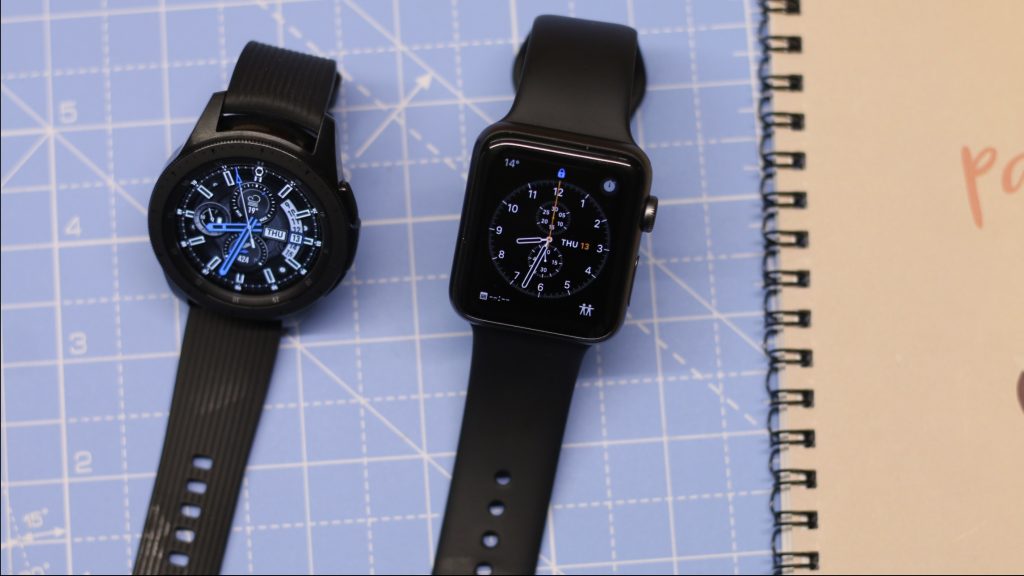 Apple Watch Vs Galaxy Watch: An In Depth Comparison - TechWiser

When it comes to smartwatches, Apple Watch has been on the top of the list for many years until rece

What are your experiences (if any) with the Galaxy Watch and do you love the Apple watch more despite the higher $ amount and shorter battery time?

I am impressed by the “find my watch” type features on the Apple Watch and, of course, many more apps. Sigh!!

Thanks in advance for your thoughts!!

I imagine some of the features will be limited/slower as it is designed to pair with an Android phone.

I like to keep track of my step count, activity and sleep. It’s also nice to see texts, etc.

Looking for something to “bridge the gap” for me until Apple Watch v. 5, if the battery life is better.

Love the GPS features of all.

I wrote about the $79 Amazfit Bip in this thread:

I’d look at the $79 Amazfit Bip. You can go up to 30 days on a single 2.5-hour charge, and it has heart-rate and activity tracking, sleep monitoring, GPS, and Bluetooth. It comes with a 30-day trial/guarantee.

Costco also sells the Apple Watch, and Amazon was having a big sale on Apple Watches, not sure if it’s still going on.

I hope this posts to the bottom of the “thread.”

Thank you everyone for the tips and info!!

Might be a pipe-dream; but I’m hoping for that from the Apple Watch someday.

I stood in Costco reading reviews about the Fitbit & Galaxy Watch versions they carried and wasn’t convinced by either.

I did (sort of) try the Amazfit Bip. … Ordered it from Amazon and it arrived bricked!

Well, either that, or it bricked itself soon after arrival.

I put it on its charger; then, once the battery was topped off, attempted to sync with its app. The app said it synched. I’m not convinced one way or the other.

The watch face was stuck on the “pairing screen,” which was odd, because the app said it had a good connection (it might have) – I got through the part where the watch said “paired” or something and I could check a green or a red symbol (I think they were checkmark and x, respectively).

Checked (touched) the green symbol and that screen cleared and the watch went back to the pairing screen!

There is no way to physically reboot the watch!!!

A Reddit thread said getting stuck on this screen was common and the only way to fix it was to let the battery die and start over (wait more than a month for it to reset!). … The other option was to load some strange software onto an Android device (don’t have one) and to download various Amazefit-watch-os software component replacement files, compiled by a community of generous hackers (no links, one must find them on their own to avoid the programmers getting caught cough WOW!). What was I about to undertake?

I undertook going to Target and getting some more packing tape! I was out.

Shipped it back to Amazon the next day. I will say their return process has improved. I got a credit to my CC about an hour after I shipped it back, using the label they provided!

I spoke with Garmin. Got a great deal on a refurb!

They don’t sell my model anymore. … But, if I promised to send in my old, case-broken watch, they’d sell me a refurbished one for about $60 (plus tax, S&H, etc.). … It was funny, they don’t offer it anymore; but if I don’t return the broken watch, I’d be out the original price of $240 or something(!).

Garmin’s customer service is awesome – I didn’t pay full price for the original purchase because I had an older Garmin that had a display stop working.

The watch has arrived and it’s PERFECT!!

It’s also funny because the technical assistant who helped me (who was awesome!) refused to say “refurbished” or “repaired.” … He gave a complicated answer about it being made from good parts and having a 90 day warranty. … The one that came in the box was clearly labeled “refurbished” and I don’t mind.

I can wait out one or two more generations of Apple Watch until they build one w/ battery life I like. … Or, I can get the 5 and give this Garmin watch to a real runner. It is designed for someone who exercises a lot more than I do…

So happy to be back to having choices. Doubling down to sing Garmin’s praises! … They’re not a client of mine, I have no association, etc. [[Addendum: Always willing to work with a super, client-focused company, not ruling anything out!!]]

Calling and talking to a real person has always resulted in a fantastic outcome for me and I hope others have the same experience!!

AND, I’m super-relieved to be back to having a watch on my wrist again!!! I had no idea how accustomed I’d become to having the actual time on my wrist without fiddling with anything. The “absence” of a watch was also bothersome; a continual feeling of having forgotten something.

Thanks again for all your help and I’ll keep an eye on everyone’s new releases!!