Any recommendations for ancestry software or platforms which are long term and could be picked up and used by dependents?

I am aware of Ancestry.com and its local versions but I am thinking of something which does not require a subscription and would be as ‘future proof’ as possible. I suppose that I am asking if there is something which is akin to a basic text file which would be much more future proof yet easily understandable by dependent in the future.

I am mainly thinking of family tree type records rather than the research side of this. Thanks all.

I’m sure you know the only truly future-proof solution is a text editor, but that aside, I’ve helped my Mum for many years trying to deal with the Ancestry software, which included multiple changes of ownership that I’ve lost track of.

But just recently, she heard about an alternative and once we got it up and running we both like it a lot. It’s called Reunion.

Mum has been doing what I would call traditional genealogy research for decades and she’s really taken to it — she’s in her 80s — and I’ve found it more capable than the Ancestry ones she’s used for years.

It doesn’t integrate with all the modern web stuff, but if you keep your research separate from your recording it’s great.

And in terms of text files, there is the standard GEDCOM format. Most applications will be able to export and import.

I’m not a serious genealogist by any means, but I did some work with Mac Family Tree recently and quite liked it. It can import/export the GEDCOM format @zkarj mentioned.

I also was impressed by its integration with FamilySearch (I believe it works with Ancestry.com too) and it has some neat charts.

I’ve been using Genealogy software since MS-DOS was the cutting-edge operating system. And I think I’ve used them all.

Personally, I don’t care for Mac Family Tree. I mean, who needs a 3-D pedigree chart? But, it is quite popular.

I regularly use Reunion. It’s stable and has good support and a good user forum. You can store your Reunion data in Dropbox (only) and access/update it on multiple computers and via their iOS/iPadOS app (an additional $10).

Another nice application, especially for world genealogy, is Heredis. The tech support is good, but their forum is poor and less active than others. You can save your data in Heredis Online and access/update it with their free iOS/iPadOS/Android apps.

All of these packages support GEDCOM for import/export. And all 3 offer fully-functional demo versions that limit the number of people in the database.

I second the suggestion of Reunion. I’ve been using it to collect ancestry stuff for years.

And then also as a backup export your files into GEDCOM format.

I too use Mac Family Tree. It does the job.

Thanks all for the recommendations. I will check out both Reunion and MacFamilyTree.

I had not heard of the standard GEDCOM format and it is probably the sort of thing I was thinking of when I mentioned ‘text files’. Good that most applications will be able to export and import.

I’ve used Heredis, together with other family members. We haven’t used it for research, but rather for logging and visualising the info we have. It seems good to me, although I haven’t explored the most recent versions, although I have purchased them.

Quick report back on this thread. I chose Mac Family Tree in the end and have linked this with a free FamilySearch.org account.

I have to say, it is excellent and the ability to bring in data from Family Search is very useful.

Using the combination of the two i have been able to trace my family and create charts going back to 1650. Really happy!

He started under MS-DOS then went to Windows, so he’s used several programs over the years. I’m not sure if any of them can be read by modern SW though, nor do I know if his floppies are still readable.
I should at least try to read them ont my Mac if they are still readable, then import into whatever software offers the most compatibility- later.

Might be worth starting by looking at FamilySearch.org. It will probably be quicker to build the tree by creating it here than trying to migrate from very old software.

I"ll give that place a look, but I need to get the data out of the disks in order to create a new tree.

long term and could be picked up and used by dependents?

At the end - paper is still the best option for long future use by others if you don’t know who they might be. So I would say if you’re planning for others to be able to use it, one of the above options plus print out a version every once in a while. No computer or genealogy skills needed, and then if someone does have interest in picking it up in the future they can use the electronic version. Bonus: it is easier to get someone interested with the paper version than a text/GEDCOM/proprietary file on a computer.

I’ve been using Genealogy software since MS-DOS was the cutting-edge operating system. And I think I’ve used them all.

Would you happen to have any of those MSDos versions of the SW by any chance?
I may need to get old binaries to extract the data my Uncle has already researched, so that I don’t need to repeat everything

For our Star Wars fans… 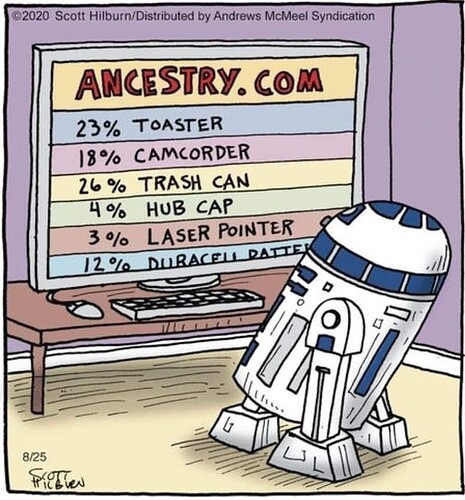 Apologies @tonycapp – I missed your question back in the day.

I’m afraid I do not have any of that old software. I wish I had the original PAF.exe produced by the LDS Church.

My family tree is paper, produced by my great aunt. It’s completed now, and it is a delight to unfold. Big +1 to me for keeping a paper record of any digital research.

She drew it left to right, and each time she needed more space for the next generations she just taped another sheet of paper to it. It grew as she researched, over several decades. It’s accompanied by “final” handwritten notes that explain each generation.

GEDCOM is an open source interchangeable format for genealogy information. It is supported by many apps and is likely to remain readable for a long time.

If you sign up for ancestry.com you can export the data you enter to gedcom format. So even if you do not keep your subscription you can still store your data in digital form readable by most gebeaokogy software.

you can export the data you enter

But only the data – without the source records, images, etc.