Any good iPad workflow for DEVONthink and markdown?

I use DT and DTTG. I am storing my meeting minutes in there in markdown. I’ve never really used DT to work in, rather, it’s been a storage unit for all my documents. However, DT is a solid app and with internal links is pretty awesome. My only problem is that writing markdown notes in DTTG on the iPad is not a pleasant experience.

Has anyone found a good workflow for this?

Can you specify what it makes an unpleasant experience for you?

The editing window font size does not resize elegantly and often leaves text chopped off at the end of the window if you zoom in. There is little code highlighting, so you need to switch from edit to preview, no simple ui themes. In general it doesn’t hold muster to Obsidian, iA Writer and other markdown editors.

My only problem is that writing markdown notes in DTTG on the iPad is not a pleasant experience.

I concur, the small DTTG editor window is frustrating. I use Drafts or iA Writer on the iPad then send the text to DT.

I use Drafts or iA Writer on the iPad then send the text to DT.

What about editing text that is already in DTTG? For example, I already have an agenda and other items already in DT. I then need to edit during a meeting.

I find that I can edit an EXISTING document in DTTG to be fine, not great, on the iPad. I was thinking about new documents using DTTG on the iPad in my reply. For some inexplicable reason, DTTG has a small editor window when creating a new document. However, editing an existing document is fine, it is a full size window. 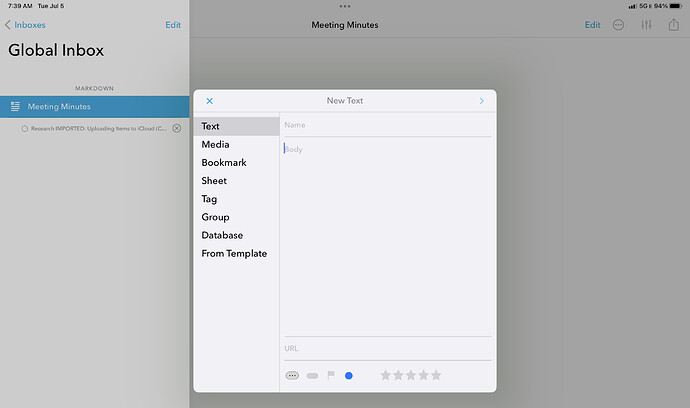 It would be nice if it were possible to use an external editor for markdown and saved changed would be piped back into DT.

I agree. One can do that with DT on the desktop but not the iPad
@svsmailus PS, this problem is solved if one indexes files in DT rather than importing them. In that situation, you can use any MD or plain text editor/application.

this problem is solved if one indexes files in DT

How does that worked with synced databases? Does it sync files stored eternally and only indexed?

You could open the MD-Document already stored in DTTG by using the Share-Function.
You can open it on this way e.g. with Drafts, and if you are Finished, you can send it back to DTTG.

Regarding the indexing of Files with DT, while it is of course a possible option, and there are for certain a lot of reasons to do so, I would always recommend to import the files rather than indexing them.
With indexing, you have to observe a couple of “rules” how to handle the documents in the future, to not run into some kind of trouble, because the Docs where moved, or deleted, and get lost, or lose the connection with its depends within DT. The DT-Forum has some threads about this.

The discussion about indexed files is almost right, here, but to clarify/confuse further…

Ergo, I strive to:

The simplest way of thinking about it is to treat DEVONthink on iOS as read-only.

I’ve been doing this for years, though. It works well.

Your kilometerage may vary, but many of those threads are from DEVONthink 2. DEVONthink 3 made Indexing way more reliable.

I don’t say, that indexing is not possible, or that there might not be good reasons, to do so, but you have to be aware of the problems you might put into your basket on that way.
And the problems you have with moved or deleted files within DT and/or the filesystem, the lack of syncing with the filesystem, and so on, are still the same, as far as I can tell.
And I also don’t see, how this could be “fixed” in the future, as it is less a “Bug” within DT, but more a general problem of the “method”.

only edit an indexed file from one “arm” of the U, and;

Are you saying then that you would or would not open a DEVONthink indexed file in an external editor on the iPad?

No, I just wouldn’t do it from DEVONthink.

You can replace Obsidian with whatever other app you choose in that statement, and the principle is the same.

I see, thank you. You’re always a wealth of reliable information.

Have you looked at Textastic? It can access document providers so your whole DT DB is available.

Maybe iA Writer or 1Writer could do this too.

Have you looked at Textastic

I do own Textastic and use it from some web work. I’m assuming you’re thinking of indexed files in DT as per @ryanjamurphy suggestion?