Is anyone still on twitter? Which app are you using on the Mac?

Twitter is the only social media I do. According to my phone, I’m on it close to two hours a day, which, even when I consider that some of it is for work, is a little disturbing. I use Tweetbot for both my Macs and my iPhone. It’s a shame Twitter hobbled them, but I still like the Tweetbot app better than anything else I’ve tried.

My username is anneperez there too.

I’m on the same boat. It’s the only social media I like - it’s my news aggregator, too.

I’ve read Tweetbot will not be updated anymore - do you feel you missed too much with all the API thing?

Me. Increasingly frustrated by it but it is the public square and I feel I would be missing out by not being there.

OTOH, my brother doesn’t touch social media a bit and he leads a full life.

Yes! Me too - I’d really love to get out of social media. But Twitter is the easiest way for me to keep up with the news. Specially in these strange days here in Brazil.

Which app are you using, @MitchWagner?

I seldom use Twitter, I find it an inefficient way to keep up with the news and the oveall content pretty shallow. I recently deactivated my Facebook account given the multiple security and privacy issues. I use Apple News for news and use text groups with family and friends as my form of social media. It is far more secure and I save a lot of time. My total amount of time on social media according to my phone is so little it is not recorded.

I spend more time on this forum than any other SM.

Thanks for the reply @Bmosbacker.

Apple News doesn’t work here in Brazil yet, unfortunately… That would really be a good way to read news.

I’ve read Tweetbot will not be updated anymore

Where did you read that? 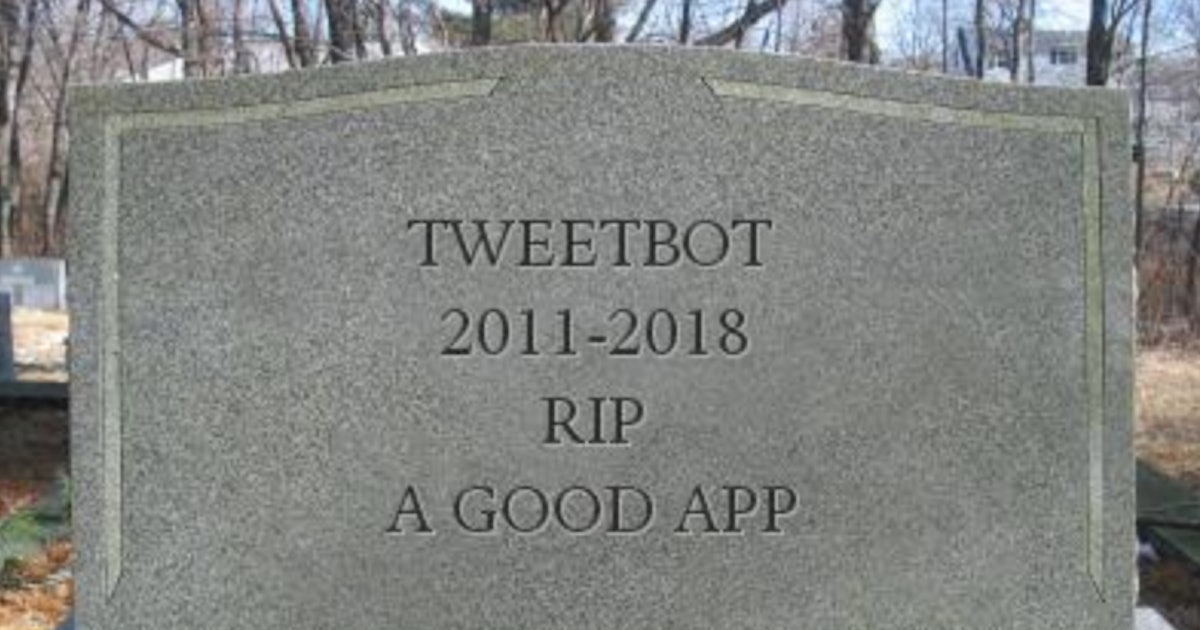 Death is simply the next great app venture.

I plan on doing this in a few weeks when I extricate myself out of a particular role that uses Facebook for Admin purposes.

I use Twitter still but only follow people around a certain couple of topics. That said, there is still a massive amount of junk in those threads but also a lot of education or at least food for thought about the area of interest. So it’ll stay for now until I think I have enough info … law of diminishing return and all that.

I just use the Twitter app as my needs are few.

I use Twitter, via Tweetbot, almost exclusively for news. As such, the API change doesn’t bother me.

However, if the time comes that the only way to use the system is the website or their own apps, I’ll quit using Twitter.

I’ve been thinking about RSS feeds for news (back to good old days)… have you tried?

I deleted my Twitter account about 6 months ago and haven’t missed it. I’ve also reclaimed hours of my life for more worthwhile pursuits.

@Drewster How do you keep up with the news? Apple News?

I never really got too involved with Twitter. I used it from time to time. Facebook is a lot like hotel California. Once you check in you really can’t check out. I’d love to walk away. I started with taking the facebook app off my phone. It remains on my iPad.

To answer the original question, no I do not use Twitter.

I use Twitter every day (and that’s where I’m keeping up with what’s happening in Brazil).

On the Mac, Tweetbot is fine for me, but all I do is read a painstakingly curated list of accounts. I don’t post or keep up with my favorites or anything like that, so whatever features Tweetbot lost in its most recent update, I didn’t even notice. I’ll keep using it until my list doesn’t work anymore.

Combination of Apple News, paid sub to Washington Post, and being in Australia we have an excellent government owned, but independent journalistically, organisation at http://abc.net.au/news

I’ve been thinking about RSS feeds for news (back to good old days)… have you tried?

I have never been a big Twitter user primarily because one ends up reading whatever comes along rather than staying focused. I’d estimate 90% of my news comes via RSS (in Feedly).

I use twitter with Twitterrific on iOS and MacOS. Left fb some weeks ago.